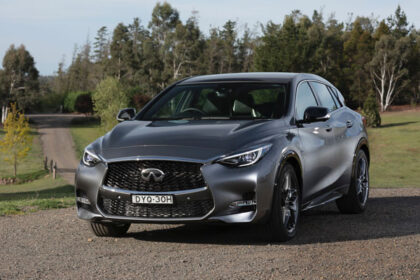 Infiniti has introduced new standard features on its Q30 and QX30 ranges. It has also reduced the number of variants and given them different model names. Just as importantly there are reduced prices to help increase sales – which have been disappointedly low to date. The Infiniti Q30 hatch comes in two just two variants, down from five: an entry-grade Q30 Pure and an upper mid-spec Q30 Sport. The previous QX30 range has been trimmed to just a single model, the QX30 Sport. The QX30 2.0 litre Turbo GT Premium… Read more

Infiniti’s extra-large QX80 has had a major facelift and a number of stylish interior updates. Previously the shape had been a bit – dare we say – Japanese and wasn’t always to the taste of Australian or Americans. Most sales are to these two nationalities so the changes are likely to make it more appealing in this country, and perhaps increase sales, because they have been rather slow to date. STYLING This is more than your routine facelift, everything forward of the windscreen has been revised, not just the easy-to-reshape… Read more 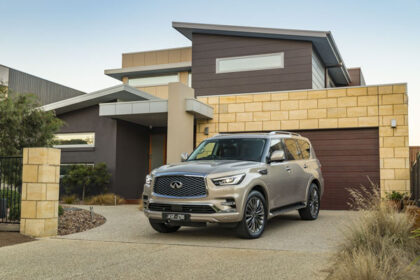 Infiniti’s large SUV, the QX80 has had a major facelift and a number of stylish interior updates. Everything forward of the windscreen has been revised. The bonnet is 20 mm higher and has been extended forward by 90 mm, the grille is taller and broader. These changes have necessitated changes to the front guards. The front bumper has what Infiniti tells us is “a muscular design that elevates its athletic stance.” The tailgate, taillights, chrome bar and rear bumper have also been redesigned. The large, imposing Japanese SUV sits on… Read more 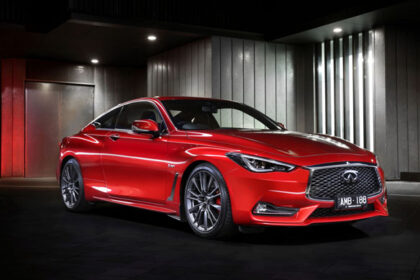 The eagerly awaited Infiniti Q60 sports coupe in V6 format has finally arrived in Australia, making the model range now complete. The turbo-petrol four-cylinder units arrived here late in 2016, and while the fours are very good, performance buyers in this class tend to lean towards the most powerful powerplants on offer. Tagged as the Infiniti Q60 Red Sport it has an all-new design 3.0-litre V6 twin-turbo-petrol engine that’s a member of the ‘VR’ powertrain family. It produces up to 298 kW of power, torque is 475 Nm. As it’s… Read more

Infiniti’s sales results in Australia haven’t been as strong as the company would like. However, a strong assault in the past year, with new models seemingly arriving by the month, seems to be working. The Infiniti Q60 is a medium-large sports coupe that is arguably the leader of the upmarket Japanese company’s renewed thrust on our market. While its natural competitor is the Lexus, Infiniti would also like to see itself entering the shopping lists for those considering the big name German and British products. Typically prices of the Japanese… Read more

Infiniti is in the process of rolling up its sleeves to present a fashion-plate face to the global automotive market across all segments and Australia is high on the list to benefit. The Japanese luxury car company stumped up no fewer than seven models Down Under last year, including the Q30, the company’s first foray into the premium compact crossover market. This is the company’s first vehicle to be built in Europe, using new production facilities in Sunderland, UK, designed to satisfy the high demands of premium vehicle manufacturing. The… Read more 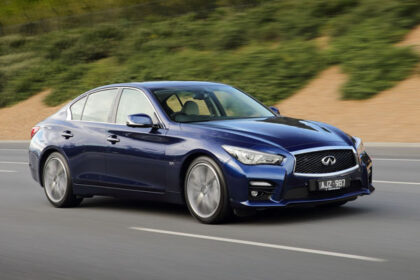 They say that imitation is the sincerest format of flattery so when Infiniti launched the first batch of its ‘Q’ cars in early 2014 and named them Q50 (for its mid-sized sedan), Q60 (coupe and convertible) and Q70 (large sedan) it was fairly obvious that the Japanese car maker was setting its sights high by imitating the BMW and Audi numbering format. More realistically Infiniti’s main rival is likely to be its Japanese compatriot Lexus. This week’s review car is the Infiniti Q50 and its chances of becoming a realistic… Read more

Our test car is the latest, and most affordable, model in the upmarket Japanese the Infiniti Q30 five-door hatchback crossover SUV. It’s also the company’s most important model, sitting as it does in Australia’s most popular, and most competitive, segment. Interestingly, because Infiniti’s parent company Renault-Nissan has a technical partnership with Daimler, the Infiniti Q30 shares a number of components, including its engines and transmission, with the Mercedes-Benz GLA. Infiniti Q30 comes in three variants (GT, Sport and Sport Premium) with the choice of three turbocharged engines, two petrol and… Read more 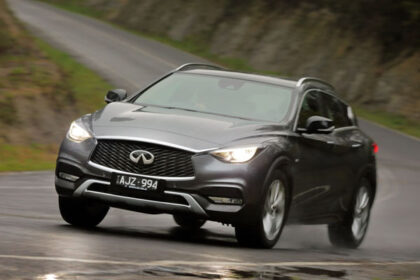 The new Infiniti QX30 sits on the same platform as the Infiniti Q30 we recently reported on, but is 35 mm higher and has a more aggressive appearance. It’s part hatchback, part SUV, with a solid touch of coupe in its shape. It shares some of its underpinnings with the Merc – the automotive world is a strange place at times. Interestingly, the Australian-market Infiniti QX30 is assembled in the Nissan / Infiniti plant in England, which makes sense because they drive on the ‘proper’ side of the road in… Read more 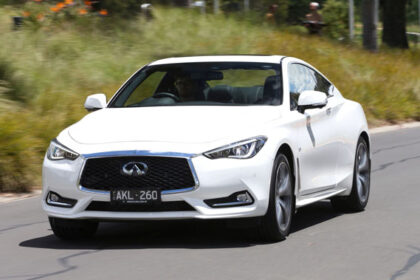 The reinvention of the upmarket Infiniti brand in Australia continues apace with the recent roll-out of the new Q60 sports coupe, bringing to the range ‘Powerful Elegance’ in design, world-first technology and the latest production processes at its facility in Japan. Infiniti has form in the sports coupe class with the G35 and G37, launched in 2002 and 2008, respectively – the latter, renamed the Q60, coming Down Under in 2012. Now the third generation has landed. The two-pronged assault kicks off with the Infiniti Q60 GT and the GT… Read more