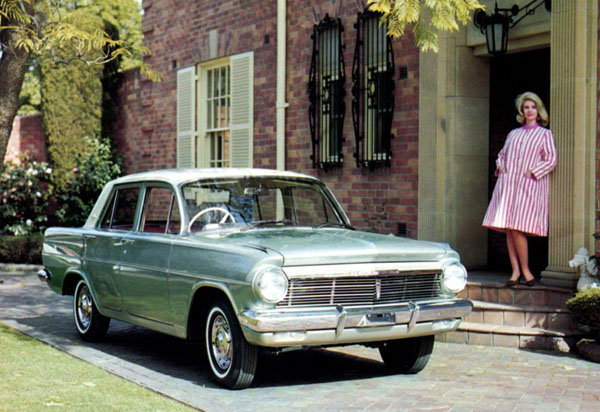 Released in August 1963 the Holden EH was many owners favourite Holden. Whilst it carried on the overall look of the previous model EJ the redesign of the rear section including mudguards, tail-lights, roofline and windscreen to produce a car with classicly simple lines. Many people consider it to be the best looking of all Holdens. Things were much the same at the front except the grille now had a vertical centre bar incorporating a Holden badge.

In GMH advertising its appearance was described as `Power-Swept styling’. Although it was only on the market for 18 months before it was replaced by the HD in February 1965 a total of 256,959 EH Holdens were produced and sold making it the fastest selling car ever in Australia up to that time.

Whilst the body had a rear redesign the major change with this model was in the power plant. Up to this model all previous Holdens used the original `grey’ motor but after 15 years General Motors introduced an Australian designed version of its oversquare in-line six. Dubbed the `red’ motor, after the colour of its block, it came in two sizes: the 2.442-litre version, in pre-metric times known as the 149 (cubic inches), developed 75kW whilst the more powerful 2.934-litre version, known as the 179, developed 86kW, making it 53 per cent more powerful than the old grey motor.

The 179 was fitted as standard on the Premier sedan and the all new Premier station wagon which was launched with the model EH. In other models the 149 came as the standard fitting but the 179 could be ordered as an option.

All 179 motor powered models were fitted with a chequered 179 flag badge on the bootlid and these soon became a popular item for teens to steal and wear on belt buckles. The Premier models were also fitted with the GM Hydra-matic three-speed automatic transmission as standard equipment whereas other models came standard with the three-speed manual or the optionally specified automatic.

About a month after the release of the EH, GMH launched what was the first hot Holden. Unofficially called the S4 and featured in some literature as the 179M, it combined a retuned 179 engine with a manual gearbox and was aimed at winning the Bathurst 500. Interestingly even though the support of motor sports was banned by the GM Corporation the Holden boys found ways to circumvent the ban.