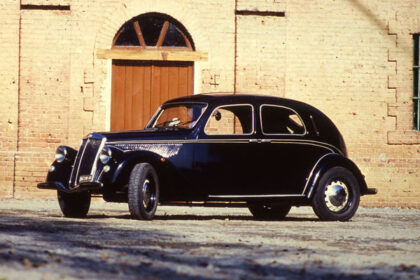 Vincenzo Lancia’s last car, the innovative Aprilia of 1937-1950, appeared a few weeks after his sudden death at the age of 55. Its aluminium V4 engine, of 1.35 litres and, from 1939, 1.5 litres, with a chain driven overhead camshaft, gave a top speed of 128 km/h. The rear as well as the front wheels had independent suspension. Quite an innovation was the pillarless streamlined four-door saloon body which was followed later by a Zagato designed and built Spyder or sports roadster. When Lancia began thinking of the Aprilia, the… Read more 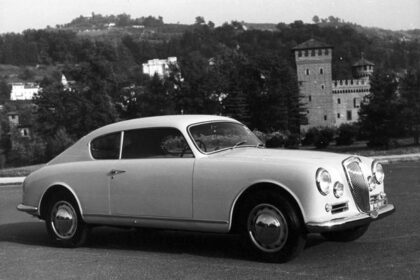 The Lancia Aurelia was the world’s first Grand Touring (GT) car. But that is not the only reason it will be remembered. It also had the first production V6 engine, with overhead valves and a capacity of 2541 cc. As well it had a semi-trailing arm, independent rear suspension which set a continuing trend, especially when linked with a transaxle combining the gearbox and rear axle for ultimate balance. Another first it scored was in the use of radial-ply tyres to further improve its handling. Of course, Lancia has always… Read more 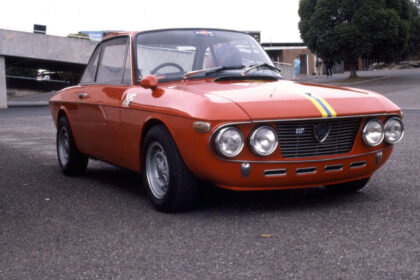 At the top end of the Fulvia range, Lancia offered a 1298cc version of its narrow-angled V4 overhead camshaft engine, supplementing the 1216cc and 1091cc versions. The 1.3-litre came in two forms for two variants of the Fulvia couple. The Rallye 1.3 used a 9 to 1 compression engine producing 65kW at 6000rpm and the Rallye 1.3HF produced 75kW at the same rpm, with the aid of a 10.5 to 1 compression ratio, high-lift cams, larger valves with stronger springs, different pistons and lightened flywheel. The 65kW engine was installed… Read more