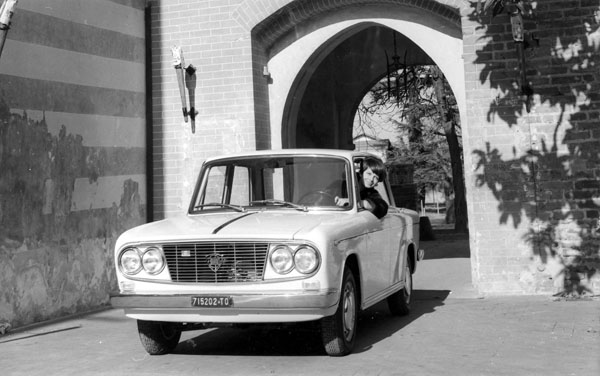 At the top end of the Fulvia range, Lancia offered a 1298cc version of its narrow-angled V4
overhead camshaft engine, supplementing the 1216cc and 1091cc versions.
The 1.3-litre came in two forms for two variants of the Fulvia couple. The Rallye 1.3 used a
9 to 1 compression engine producing 65kW at 6000rpm and the Rallye 1.3HF produced
75kW at the same rpm, with the aid of a 10.5 to 1 compression ratio, high-lift cams, larger
valves with stronger springs, different pistons and lightened flywheel. The 65kW engine
was installed into the prestige car of the Fulvia range – the Zagato-bodied Sport 1.3

The Fulvia Sport could be driven for hour after hour at high speed. In heavy rain the
average speed may have dropped slightly, not because of lack of adhesion – the Michelin
XASs made the Lancia almost as quick through fast curves in the wet as in the dry – but
because the wiper blades lifted from the windshield at high speed.

However, when cruising at high speed, the noise level was impressively low, with very little
wind roar. Instead of relying on opening rear side windows for air extraction, Zagato
provided an ingenious, rather expensive arrangement involving an open rear tailgate. The
lift-up rear door was raised the first 25mm by electric motor, controlled by a dashboard-
mounted switch, and this provided a most effective means of air extraction without causing
either wind noise or draught.

The vinyl-covered, front bucket seats were well padded, with lavish bolstering of cushion
and backrest. You needed to stoop quite low to get in and, once inside, headroom for a tall
driver was marginal. Although there was a narrow bench-type seat cushion behind the
front seats, lack of headroom made it unsuitable for anyone but a child, except for very
short journeys.

The unpainted metal spokes of the large-diameter steering wheel were angled downward
to give a clear view of the speedometer and tachometer, with fuel, oil and water gauges
between them. In the centre of the dashboard, which had wood facing, a clock was
provided. Forward visibility was excellent, the rear view reasonable through a low-mounted
mirror, but the sloping rear quarters of the body created a blind spot on the side opposite
the driver.

The low-geared steering suggested hard work, but the steering was light and completely
free from float. The car was as stable as an arrow at high speed and although there was
quite a lot of arm movement, it was not really tiring. Testers reported that after driving for
eight hours, stopping only for petrol, a driver could step out still feeling fresh. The servo-
assisted, all disc brakes were outstanding and could not be faded driving on mountain
roads.

The gearshift was well positioned, although there was quite a long travel between gears in
the vertical plane and a very short lateral travel across the gate. Handling was toward
under-steer, but never excessively. It took some deliberate action by the driver to unstick
the rear wheels, such as applying too much lock then lifting off. To regain adhesion, it was
merely necessary to take off some of the lock and reapply power, then adjust steering to
the new line.

There was something special about this front-wheel drive car that showed none of the
drawbacks of its layout – heavy steering under acceleration, excessive tyre scrub and
under-steer – while revealing its considerable virtues, like superior stability, traction and
ease of control. The Lancia Fulvia was one of Europe’s very best small capacity GT cars.