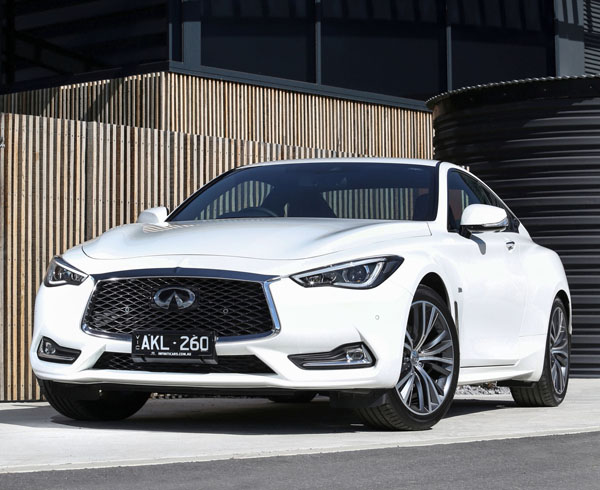 Infiniti’s sales results in Australia haven’t been as strong as the company would like. However, a strong assault in the past year, with new models seemingly arriving by the month, seems to be working.

The Infiniti Q60 is a medium-large sports coupe that is arguably the leader of the upmarket Japanese company’s renewed thrust on our market.

While its natural competitor is the Lexus, Infiniti would also like to see itself entering the shopping lists for those considering the big name German and British products. Typically prices of the Japanese car are $5000 to $7500 beneath those of the equivalent Germans.

Our test car was the Infiniti Q60 2.0-litre 2.0t GT fitted with the optional Enhancement Pack. This adds adaptive front lighting, powered glass sunroof, Bose Performance audio with noise cancellation, and around-view monitor for a price of $65,900. On-road costs have to be added.

STYLING
Long, low and aggressive, the Infiniti Q60 has an excellent execution of the company’s double-arch grille, long bonnet, large rear haunches and crescent-shaped C-pillars. Riding on 19-inch wheels it works very well and attracted plenty of comments during our week at the wheel.

With a co-efficient of drag of 0.29, the big Infiniti’s aerodynamic efficiency isn’t as good as we expected from the dynamic shape.

Inside, the big Q60 is unmistakably aimed at the sporty driver. It has a pair of large deeply-hooded dials directly in front of the driver, a real ‘cockpit feel’ in the way the front occupants have separate areas. The twin touchscreens are easy to see and access. 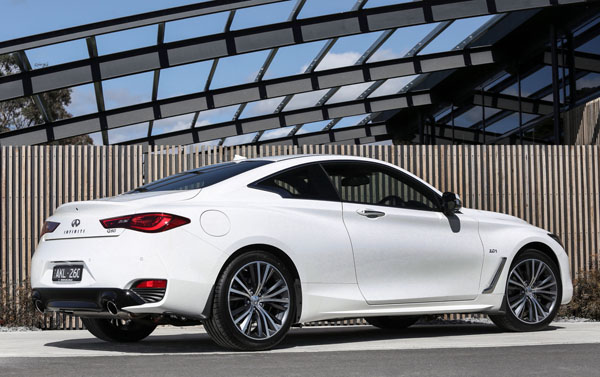 ENGINE / TRANSMISSION
The engine is pretty typical for its class these days, a four-cylinder 2.0-litre turbo-petrol engine producing 155 kW, and 350 Nm from a very low 1250 revs, to 3500 rpm. Being very much prestige Euro centred, Q50’s drive is to the rear wheels, it uses a multimode seven-speed automatic transmission

The sprint from zero to 100 km/h comes up in 7.3 seconds. Quick, but not brilliant, those who want more grunt can opt for the 298 kW 3.0-litre twin-turbo V6 petrol engine that recently joined the range. Must make a note to get ourselves behind the wheel of one of those asap…

INFOTAINMENT
The centre console has dual touchscreens (8.0-inch upper and 7.0-inch lower) to control with the Infiniti InTouch central control system. Compared with the previous generation InTouch has fewer buttons, making it not only safer to operate, but also giving the cabin an uncluttered appearance.

Neither Apple CarPlay nor Android Auto are offered at this stage – a real minus in this class. Infiniti hopes to rectify this situation soon.

Quality of the optional Bose Performance audio system is impressive. We found radio station pick up was over variable several times during our test period. But atmospherics can interfere and it’s impossible to do accurate back-to-back testing on the road. 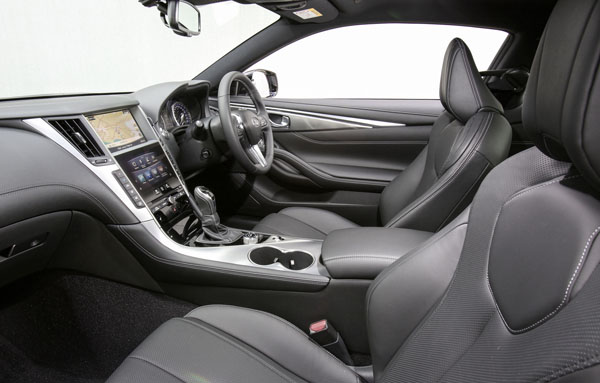 SAFETY
Infiniti Q60 monitors potential hazards and actively help the driver to avoid them. If a collision is unavoidable, the system helps to mitigate the effects on the occupants.

The Q60 is equipped with six airbags as standard – driver and passenger front and side impact airbags, and roof-mounted curtain airbags with a rollover sensor.

DRIVING
The rather wide doors of the Infiniti have an infinite number of ‘hold’ positions, preventing paint damage in tight parking spaces.

You can personalise the interior environment and store profiles for multiple drivers, identified by their Infiniti I-key (intelligent key). This can memorise more than 250 programmable settings, including driving seat positions, audio, and navigation settings; display settings, and heating and ventilation preferences.

Legroom in the front is good, but the back seat isn’t particularly generous, shoulder width is two people of average build. The coupe roofline limits headroom for the taller person.

Being a Japanese car the Q60 has a generous 340-litre boot that can take two full-size golf bags.

Engine performance is good without being outstanding. We will have to wait for the new V6 with 50 per cent more capacity to get into the real sports coupe territory. Turbo lag is about average for this class.

Fuel usage was about six to eight litres per hundred kilometres on country and motorway cruising, rising to nine to eleven litres in town. This is a heavy car, at 1.7 tonnes without anyone on board. The European machines in this class are lighter and less thirsty.

Infiniti is proud of the technology that has Q60 measuring lateral acceleration sensors to detect changes in the road, such as hills or corners, and enhances gear-select patterns according to the changing conditions. We found this works nicely and the big Infiniti was almost invariably in the right gear at the right time.

Steering feel is okay for cruising but we found the feedback on the twisty stuff had a somewhat artificial feel, you can learn to adapt to this and make the car perform well enough, but perhaps the Infiniti engineers should spend some time behind the wheels of its Euro competitors to get some more feedback on this (pun intended).

Drive Mode Selector provides a range of modes – Standard, Snow, Sport, and Personal. Our preference was the Sport mode as it increases the level of steering effort required and quickens the steering ratio for more immediate handling responses. In addition, changes to engine and transmission mapping deliver the required driving characteristics.

In Personal mode Infiniti Q60 drivers can personalise the steering performance by selecting one of two core modes (Standard, Sport) and then specifying their preferred response (Default, Dynamic).

We don’t like floor mounted parking brakes – something Infiniti appears to have copied from old Mercedes-Benz models. Thank goodness the Merc guys have got away from these awkward devices, hopefully Infiniti will do the same thing.

SUMMING UP
Stylish, with an aggressive stance on the road, the Japanese Infiniti Q60 sports coupe is something out of the ordinary and will appeal to those tired of endless German cars in this field.