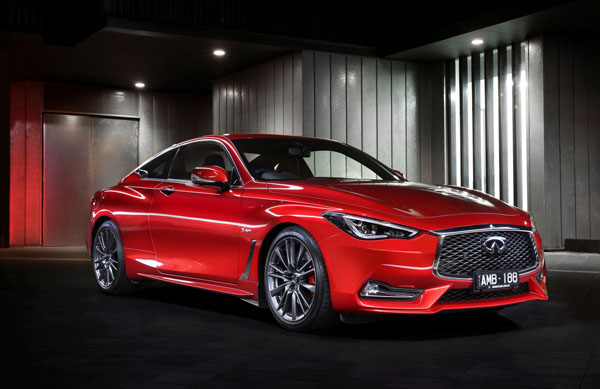 The eagerly awaited Infiniti Q60 sports coupe in V6 format has finally arrived in Australia, making the model range now complete. The turbo-petrol four-cylinder units arrived here late in 2016, and while the fours are very good, performance buyers in this class tend to lean towards the most powerful powerplants on offer.

Tagged as the Infiniti Q60 Red Sport it has an all-new design 3.0-litre V6 twin-turbo-petrol engine that’s a member of the ‘VR’ powertrain family. It produces up to 298 kW of power, torque is 475 Nm.

As it’s aimed very much at the European prestige coupes, it’s no surprise that the Infiniti Red Sport is driven by the rear wheels. Infiniti Q60 Er Sport’s seven-speed automatic transmission incorporates Adaptive Shift Control with a lateral acceleration sensor to detect changes in the road, such as hills or corners, and enhances gear-select patterns according to the changing conditions. It also reads driving behaviour and adapts shifts to driver feedback.

Signature Infiniti design cues such as a double-arch grille and fascinatingly-shaped C-pillars that arc forward continue to work very well in the Red Sport model, giving it a “ready-for-anything” attitude.

The Q60 uses efficient LED headlamps that use of ‘light guide technology’ to spread light evenly on the road ahead. Infiniti tells us they are designed to emulate the shape of the human eye.

Aerodynamic efficiency is good without being outstanding, the Q60’s drag coefficient is 0.29. Part of this results from vents in the front guards directing air from the engine bay. And the door mirrors improving the flow of air down the flanks of the vehicle. Clever stuff.

Inside, the centre of the dash is dominated by twin touchscreens (8.0-inch upper and 7.0-inch lower). These give access to the InTouch central control system, the latest generation of Infiniti’s infotainment technology. This has reduced the number of buttons, giving the cabin a neat, uncluttered appearance 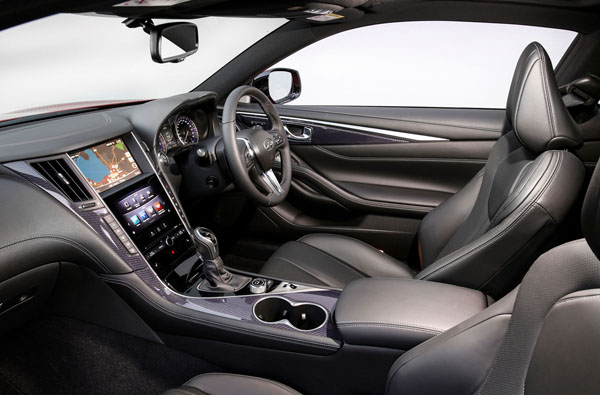 Legroom front and back are not generous, shoulder width is ample for those people of average build although the coupe roofline limits headroom for the taller person. The boot is big enough to take two golf bags – something that’s totally necessary if you’re to sell an upmarket sports coupe in Japan.

Infiniti’s ‘spinal support’ seats reduce the spinal curvature and provide extensive upper body support that spreads the occupants’ weight evenly all the way up the seat.

Infiniti Q60 safety technology enables the car to monitor potential hazards and actively help the driver to avoid them. If a collision is unavoidable, the system helps to mitigate the effects.

We are yet to get ourselves into the new, more powerful Infiniti Q60, but have it sitting on our list of road test machines. Stay tuned.