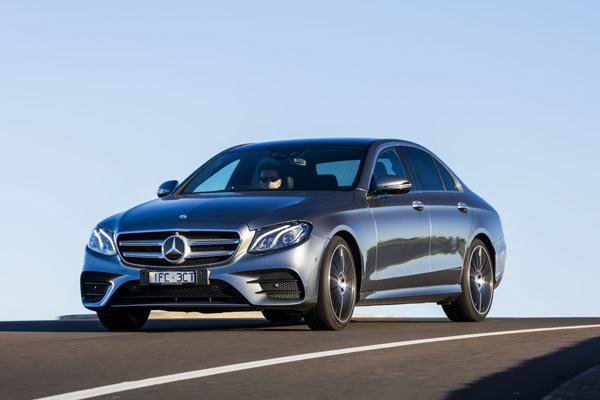 The Mercedes-Benz E-Class has long been that middle child unable to truly hog the spotlight despite its long list of favourable talents. With the sublime S-Class as a confident older sibling and the precocious headline-grabbing C-Class as a younger, you have to jump pretty high to get noticed.

Now, however, repositioned as the core of the brand and charged with taking the Mercedes-Benz tradition of style, comfort and top-class innovations into the future, the E-Class is taking centre stage.

We put the E220d, which starts at $92,900, to the family test for the week. Until the end of May 2017, Mercedes-Benz Australia is offering a limited 220d Night Edition, priced from $96,800 with a reported $9000 worth of extra kit including black 19-inch AMG wheels, panoramic sunroof, special Night Package details and styling and a 13-speaker Burmester surround sound system as a start.

STYLING
Smooth and sleek, the E220d sits low and proud to the ground the imposing front grille and badge package a complementary foil to an almost coupe-like rear end. More traditionally styled lights should look out of place but don’t while pronounced door creases complete a classically stylish look.

That effortless chic is mirrored in the spacious cabin where fit and finish is as you would expect from a true luxury offering.

Despite the soft leather, modern highlights and considered touchpoints, it is the double 12.3-inch integrated colour touchscreens placed next to each other on the top of the dash that capture the attention and imagination. This is the face of Mercedes’ infotainment and driver instrumentation system and can be controlled either by a touchpad on the steering wheel or by a larger unit in the middle of the console.

The thing about luxury is that looking is not enough, you want to feel it as well, and Mercedes obliges in this instance with supportive and bolstered powered seats in standard leather. Heated and vented, they fit nicely in the small of the back and are long enough under thigh too, making extended trips a welcomed event. 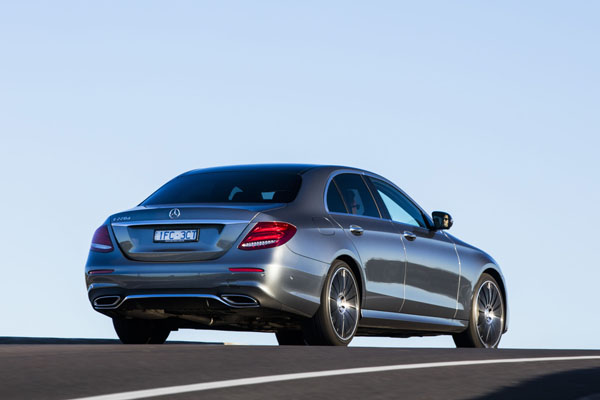 The back seat can hold three in reasonable comfort although the transmission tunnel does intrude on the legroom allotted to the person in the middle. There are two cup holders in the centre armrest to match the two in front, deep usable door bins and two IsoFix mounts on the outside seats.
At 540-litres the deep boot further adds to the sedan’s practicality, and will fit two medium-sized suitcases with ease, that space growing at the pull of quick access levers that will lower the 40:40:20 back seat. There is no spare though, which may raise the eyebrows – Mercedes opting to go with the run-flat tyres instead. But look at the above comment, ‘deep boot’…

INFOTAINMENT
The 12.3-inch screens that front the Mercedes-Benz COMAND multimedia system is an impressive unit featuring top notch graphics and a crisp clean design. They stretch cross from the centre of the dash behind the steering and feature Apple CarPlay, Android Auto and digital radio and also display the speedometer, fuel levels and tacho for the driver. You can choose from three different looks – Classic, Sport and Progressive – and the digital nature of the system allows you to customise the screens to show only the information you think relevant.

This is the home of your ambient lighting colour wheel as well giving you the option of more than 60 colours. It seems trivial but it is a feature the kids had fun with all week.

Operation of the COMAND system either via finger swipes on the steering wheel touchpad or the touch sensitive control in the centre console takes a while to master. It is not as intuitive as you would hope and can be cumbersome to change on the move. Potentially dangerous, as well. 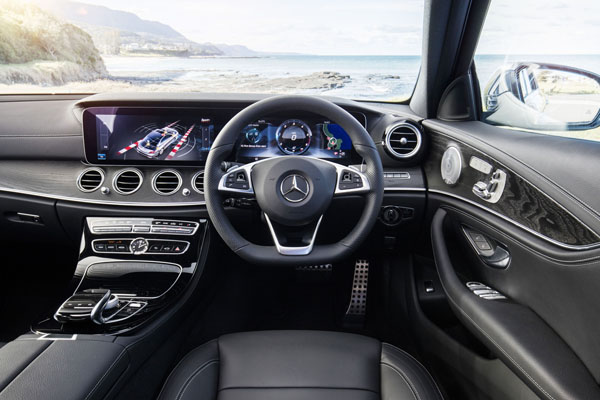 ENGINES AND TRANSMISSIONS While the E-Class’s cabin, exterior and features are certainly big selling points, it is the drivetrain in this 220d that is the true hero of the piece.

The new 2.0-litre four-cylinder diesel unit offers 143kW of power and 400Nm of torque providing a platform for a seemingly effortless drive. The nine-speed automatic transmission is a sensible companion, moving quickly through its repertoire for peak fuel economy but is quick to drop down a gear or two when extra effort is required.
It is super quiet, too, a rare quality in a diesel.

SAFETY
Mercedes is at the top of the tree when it comes to safety technology and the suite featured in this E-Class gives more than a small indication of where they are placed in the autonomous driving space. Nine airbags, autonomous emergency braking, lane-keep assist and active bonnet assist are just three highlights in a list that also includes self-parking, semi-autonomous driving, active blind spot assist and cross traffic detection.

DRIVING
Let’s face it, driving is a cinch when you have a car that can pretty much do everything for you and keep you ensconced in comfort while it does.

This E-Class is definitely an interesting proposition. It can park itself. Not just manoeuvring into a space while you control the brake and accelerator, mind you. Once a space has been detected and at your signal it will slide in easily, even switching from forward to reverse if needed, while you gather your things and wait to alight.

It can overtake by itself. If you are driving along the highway and indicate your intention to overtake, the E-Class will move you across to the adjacent lane as suitable and will bring you back after you have passed the car in front.

It can drive by itself. OK, this is a little bit of a stretch but it can, mostly. Mercedes is quick to point out that we are talking autonomous driving here not automated so there has to be driver involvement. The car does better on clearly marked roads with a car in front of it, like freeways for example, but is less astute on country backroads where the edges of the road especially without line markings are trickier to distinguish.

As an aside, you can technically take your hands off the steering for up to a minute but that’s not allowed here in Australia.

Having these driver aids at your disposal is an advantage especially as they don’t detract from the enjoyment of the car.

And this definitely is a lovely car to be in. The ride feels comfortable and balanced and course road sections are nicely managed. There is poise from take-off, no hesitation when pushed to overtake or merge and relaxed refinement when cruising. The air suspension in our test car kept it eager in and out of corners adding a dynamic quality to a classy drive.

There is no question that some competitors in this class like the Jaguar XF, BMW X5 and even the Audi A6, can offer a more engaging experience if you want it the E-Class’s balance between comfort and handling is hard to beat.Fuel economy is pretty good too with our week in the E220d showing figures of 5.2L/100km in the real world. That’s 25 percent more than the manufacturer’s claim of 4.1L/100km, though.

SUMMING UP
Sometimes you step into a car, settle yourself in and take a deep, relaxing breath. The Mercedes-Benz E220d is one of those.

It is not flashy or loud, just quietly confident in its ability. It has class and style, offers an accomplished drive, eye-widening technology and reassuring comfort. A job well done.