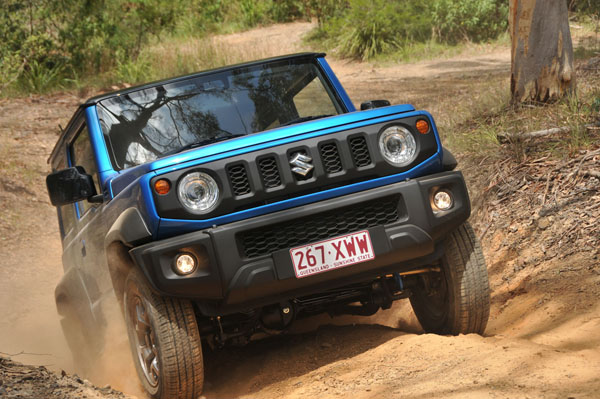 We can’t remember the last time a new vehicle has had such a dream run as the Suzuki Jimny. Since the first pictures of the chunky looking new model were released midway through 2018 Suzuki dealers have been bombarded with enquires from potential buyers.

Showing they are serious many have put down deposits, with a global waiting list of about two to three months. The Suzuki people in Queensland people won’t reveal their figures, but the smiles on their faces are a giveaway.

Even better for Suzuki, the Jimny literally doesn’t have any competition. No other company builds a low-cost small genuine 4WD. While there are many small crossovers and SUVs on sale, none are ‘real’ 4WDs with a body-on-chassis ladder-frame construction.

The engine drives all four wheels through 2H, 4H and 4L modes. It even has a ‘proper’ lever on the centre tunnel to select ranges, not the silly dashboard buttons on the superseded Jimny.

We’ve just attended the Suzuki Jimny launch in Queensland. (Queensland Suzuki operates independently from the rest of Oz, though the two importers are quite good friends these days.) 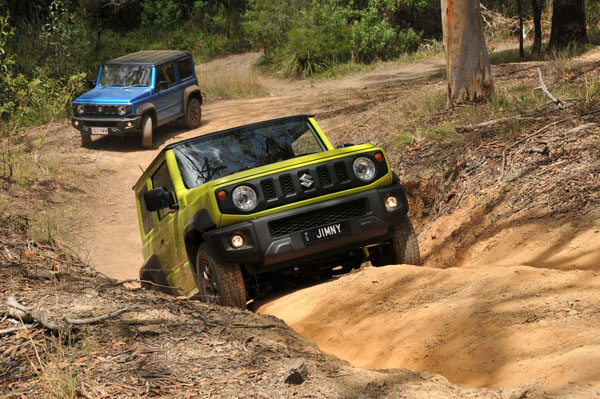 Though we loved the new Jimny’s shape in photos I reckon it’s not quite so appealing in the metal – it looks just too boxy. Then again, its stunningly practical in the way every square centimetre inside can be used.

Obviously beauty is in the eyes of the beholder, so call into a Suzuki dealer to see what you think.

We do love the new interior, it’s got a neat old-style look with big easy-to-see instruments and Suzuki’s excellent infotainment screen.

Power comes from a 1.5-litre four-cylinder petrol engine with 100 horsepower (75 kW in Aussie numbers) and 130 Nm of torque. The latter is at a relatively high 4000 rpm, but it feels grunty enough over a wide range.

The engine is let down because it’s sitting in front of either a five-speed manual or four-speed automatic transmission. One more gear in the self shifter and a couple more in the auto would have made Jimny nicer to drive.

Our brief on-road testing was done only in a manual. The engine is running at 3000 revs on country roads when almost every other new vehicle is turning over in the low 2000s. The engine is reasonably well insulated from the cabin but it does sound busy. 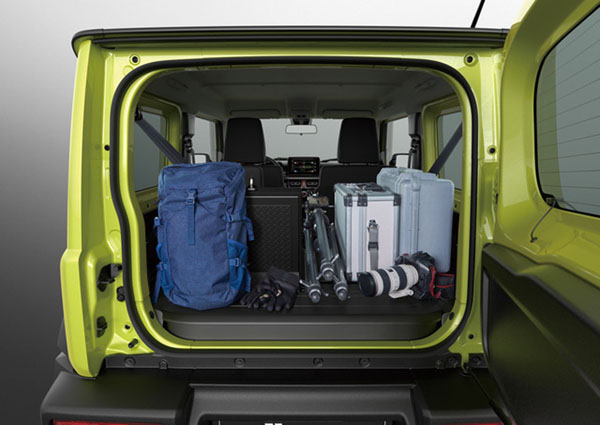 Ride comfort is way ahead of any other Suzuki Jimny, Sierra or LJ Series 4WD we have driven. It’s perhaps not the quite to the same standard as a Swift or Baleno, but comes mighty close.

Similarly, cornering shows levels of grip and ease of control at speeds belying that fact that it’s a body on chassis 4WD.

Then came the exciting part of the testing – serious off-road driving on moguls and steep, deeply rutted hill trails. Suzuki Jimny is just brilliant. It has even better approach / ramp-over / departure angle than before. It has clever features that provide maximum grip to the tyres that have traction by using Suzuki’s All Grip Pro system.

Suzuki Jimny takes you places where other alleged SUVs would get well and truly stuck and does it so easily that it feels more like a stroll in the park than a battle with the terrain.

The front seats are larger than in the superseded Jimny and, due to the squared off body, you don’t feel you’re rubbing against the person sitting alongside you. There’s more space in the back seats and they have reasonable legroom even with a full-sized adult sitting in front of you.

Boot space is pretty good for such a small vehicle and the back seats fold down to improve cargo space. You can also fold the front passenger seat almost flat to provide enough length to carry a ladder or long surfboard. Folding down the driver’s seat as will make a vaguely comfortable double bed.

A lower-specced Jimny GL seems likely to be introduced later. Stay tuned and we will advise if / when that happens.

All-in-all the latest baby Suzuki 4WD is a masterpiece of automotive engineering and practicality. If you enjoy adventurous weekends but live in a big city and can only afford one vehicle – Jimny is it.