Mercedes-Benz A-Class has not only grown up, it has also become significantly more mature. In its earliest days it was a cute stubby car designed to fit the tightest of European city parking spaces. Now it has grown to be virtually a smaller version of the Mercedes C- and E-Class ranges.

It is larger inside than the model it supersedes, with more shoulder space, elbow room and headroom in both the front and rear seats.

At 370 litres the boot is 29 litres larger than before and more accessible due to a larger opening.

At this stage all new Merc A-Class models are five-door hatchbacks, a sedan will join them later this year.

Our test vehicle was the Mercedes-Benz A 200, it was fitted with several options, the most interesting from the point of view of keen drivers being the active suspension.

STYLING
The latest compact Merc body is surprisingly conservative to our way of thinking. It has fewer creases and a relatively subtle front, though the latter varies in style from model to model. Then again, providing the look of a scaled down C-Class may prove an excellent marketing move.

The quality inside the cabin is impressive both in style and materials, with detailed touches that lift it right into luxury territory. 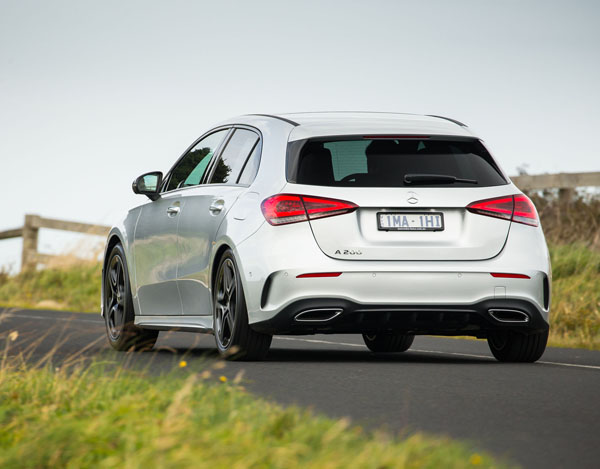 We are still coming to grips with the new Mercedes dashboard style with its very elongated instrument panel and a somewhat empty area in front of the passenger. But there is no denying the functionality of the system and the fact that the display gives you a choice of modern classic, sport or understated layouts, with the possibility of up to 25 profiles.

POWERTRAIN
The European engine designers are doing impressive things in small-capacity, high-power, low-emission units. The A 200 we tested has a four-cylinder 1.3-litre (Yes! 1.3 litres) turbo-petrol engine that puts out 120 kW of power and 250 Nm of torque.

It drives the front wheels through a seven-speed dual-clutch automatic.

INFOTAINMENT
The latest technology features are based around the MBUX (Mercedes-Benz User Experience). It can be activated by saying ‘Hi Mercedes’ to gain access to important functions, destination details, phone calls, music choices, as well as the ability to write and hear messages.

Regular radio programs, such as news reports, will be suggested to the Merc’s occupants through a new advanced voice recognition system that understands ‘natural’ language. It doesn’t need set commands and can even get its electronic brain around various accents.

We found the voice recognition worked reasonable well and even my mixed Australian/Scottish accent didn’t overly faze it. 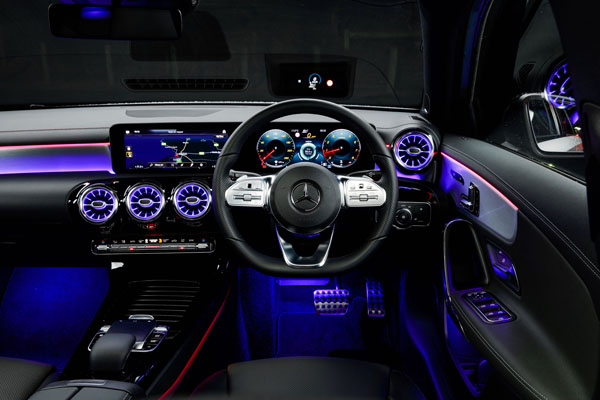 (As an aside, during a trip to Mercedes in Germany in the mid 1980s I was asked to speak dozens of individual words into a microphone attached to a computer as part of early stages of building voice recognition. Aussie journos in our group did the same thing.)

SAFETY
Believe it or not Mercedes did some of its earliest safety research during World War Two, probably to stop inexperienced non-commissioned soldiers from killing senior officers they were taking from place to place.

Fast forward to the 21st century and the smallest Benz has a staggering array of safety features. Those which work at crash avoidance are brake assist with semi-autonomous braking, active lane keeping, blind spot monitoring, a warning not open a door if traffic or pedestrians are close to the vehicle on the outside, and traffic sign recognition.

If you still get into a crash nine air bags will expand to you look after you and your fellow travellers: front, pelvis side and window bags for driver and front passenger, side bags for rear occupants and a knee bag for driver,

DRIVING
This is where the all-new A-Class really shows its stuff. Ride quality and noise suppression inside feel every bit as good as that of the C-Class, perhaps even an E-Class.

Even on the notoriously noisy concrete motorway surfaces between our base on the Gold Coast and Brisbane the small Merc was almost silent inside.

There was some tyre roar on course chip surfaces but we have heard far worse. Surprisingly there was more wind noise around the mirrors at speeds of about 80 km/h and over than we anticipated. Perhaps the Merc is set up to cruise at 130 to 150 km/h in Europe and mirror aero has been based around that.

Comfort is, again, like that from a car from the next size up. The front seats support well and the back seat can be used by a tall traveller behind a 182cm driver such as myself.

When colleague Derek Ogden attended the Australian media launch of the new A 200 he drove cars with both standard and active suspension and concluded, “I can’t see many buyers going for the standard model after driving the electronically elevated active suspension.”

Engine performance is very good, and although there’s some initial turbo lag once it’s up and motoring, there’s ample acceleration for real world driving and safety overtaking in the country.

The dual-clutch auto reads the driver’s intentions well and works with the engine.

Fuel consumption was impressively low, with easy running having the car using just five to six litres per hundred kilometres on motorways and lazy country running. It rose to eight to ten litres in heavy traffic during the busy holiday period when we were testing it on the Gold Coast.

SUMMING UP
Always wanted the prestige of owning a Mercedes-Benz but found them out of your budget? Take a new A-Class for a test drive and there’s every chance you will sign up on the spot.

MODEL RANGE
A 200: $47,200
A 250: $49,500
Note: These prices do not include government or dealer delivery charges. Contact your local Mercedes-Benz dealer for drive-away prices.