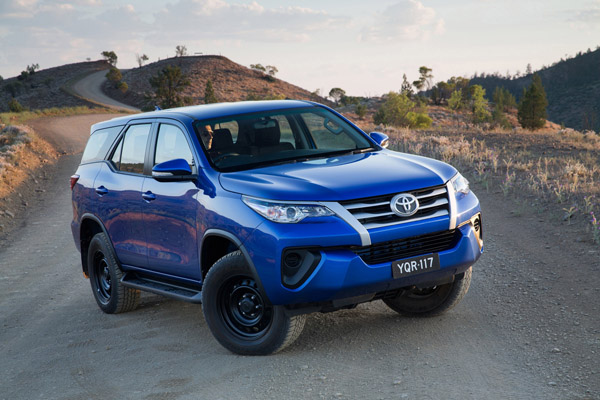 Toyota Fortuner is a seven-seat SUV that’s based on the Toyota HiLux pickup truck. While it shares many of its body-on-chassis underpinnings and mechanical components, the fortuner has a multi-link rear coil suspension, unlike the HiLux which is setup as a working vehicle.

It has a bold frontal appearance with large foglight surrounds and a tall bonnet. The body kicks up at rear and carries slim rear windows.

There are numerous combinations of seating and cargo carrying. The middle row seats can side backward and forward and the backrest folds down. The third row seats fold up to the side of the cargo area.

The front pair of seats are reasonable comfortable though they don’t provide what you would call sporty side support. There are air conditioning vents to all three rows.

Australian engineers worked in close conjunction with Japanese engineers on the design of the coil-spring suspension is used in the Fortuner.

On sealed roads the Fortuner is quieter than you would expect in a pickup based wagon. Some sealed roads that have seen better days may create a rather jiggly ride at times. On the other hand new Fortuner rides nicely on smooth to moderate sealed roads.

Off-road, the ride quality on corrugations and over rough n’ ready surfaces is good for a modified pickup though not quite to the standards of dedicated SUVs. Obviously there have to be a lot of compromises in 4WD on-road / off-road suspensions.

Owners who done long distance family trips in the great Aussie outback tell us they’re delighted with their Fortuners.

Toyota Fortuner is powered by a four-cylinder turbo-diesel 2.8-litre engine that produces 130 kW of power; and 450 Nm of torque, that’s when it sits on front of a six-speed automatic – torque is reduced to 420 Nm with the six-speed manual.

The six-speed rev-matching manual is fitted to the topline Fortuner Crusade model to give it a touch of class.

The commercial vehicle roots of this engine are displayed by the fact that maximum power is generated at just 3400 rpm. Similarly, peak torque sits at 1600 to 2400 with the auto, and 1400 to 2600 with the manual.

As a serious 4WD the Fortuner has a two-speed transfer case. Shifts between 2H and 4H can be done on the fly at speeds up to 100 km/h.

The manual can tow up to 3000 kilograms, the auto’s capacity is slightly lower at 2800kg.

Seven airbags are standard, with the curtain airbags covering the third row seats. Fortuner has achieved a five-star ANCAP rating. An Australian-designed bullbar has been produced to work with the airbags during a collision.

Toyota is king of the 4WD market in Australia and offers a huge range of vehicles. Fortuner is something out of the ordinary and has inevitable compromises. Make a list of what’s important to you in a SUV and if the Fortuner ticks enough boxes go for it. 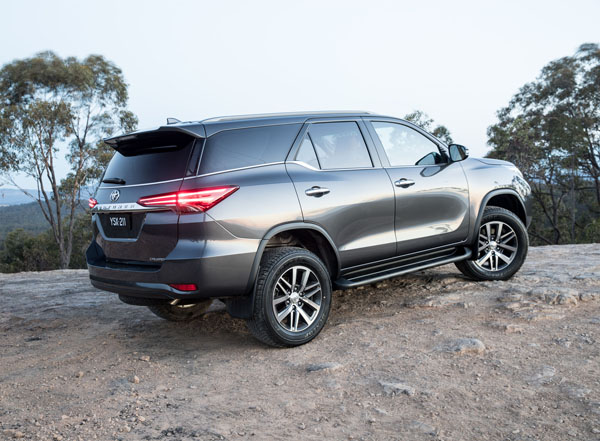 WHAT TO LOOK FOR
Look at the service books to make sure the work has been done on time every time, ideally by a Toyota dealer.

These old style diesels may have particular filter problems. This can mean loss of performance. Check the service books to see if the filter has been replace.

Do an initial walk around to get a general indication of the life a Fortuner has led. In particular for scars or damage to the lower corners, the door sills and scratches on all side panels.

Get down on your knees, or better still up from underneath a hoist for signs of contact with hard parts of Australia.

Has a towbar been fitted? If so a Fortuner may have pulled some big loads on rough unsealed roads. Or just a small trailer to the local tip.

During your test drive do some hard acceleration and watch for oily smoke from the exhaust.

Get it off road and listen for squeaks and rattles which may mean it has been seriously fanged off-road.

CAR BUYING TIP
The more vehicles of the type you’re considering you inspect, the more easier it becomes to spot the good from the bad