The relentless advancement in technology is everywhere, and nowhere more so than in the automotive field. Witness the stunning new Audi S4 high-performance range.

So, costing a staggering $33,000 less, the Audi is much quicker, more economical and significantly cleaner.

Given that Audi’s catch phrase Vorsprung der Technik translates approximately into English as Advancement Through Technology, these changes perhaps shouldn’t surprise us. But it does raise the question of what will come out of Audi’s HQ in Ingolstadt in 24 years time?

A word on the price though, to brings things back to reality. While the list price of the first Audi we tested – on a drive program out of Mount Panorama on the Friday of the Bathurst 12-hour race weekend, we motoring journos lead a tough life! – had a tag of $116,196, not $99,900. 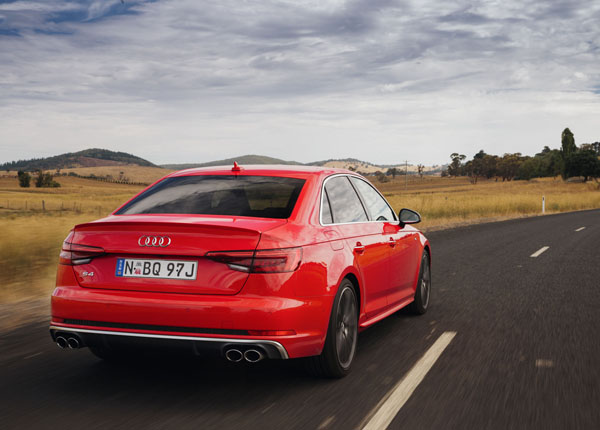 Audi S4 comes in both four-door sedan and five-door station wagon format, the latter referred to in Audi speak as Avant and priced from $102,990.

Styling changes to the standard Audi A4 to produce the S4 are comparatively subtle, though train spotters will have no trouble seeing that it sits 23 mm lower, has a revised grille treatment, side skirts and rear diffuser. Audi’s stylists have gone for ‘high-performance’ looks in the add ons as they use aluminium and chrome with a grey look where appropriate.

Inside are sports seats with good side support, a flat-bottomed steering wheel and an extensive use of carbon inlays.

The powertrain of the Audi S4 features a turbo-petrol V6 3.0-litre engine that puts out 260 kilowatts of power and 500 Newton metres of torque. The latter from a very low 1370 rpm, continuing till 4500 revs.

Transmission to permanently to all four wheels is by way of an eight-speed Tiptronic automatic that’s optimised to suit the sporting nature of the car and Audi’s quattro layout.

Driving modes are Sport, Normal and Efficiency. We primarily used S during our initial 400+ kilometres at the media launch, but promise to try the others when we carry out our week’s test in our home area later.

Our drive program took us from Mt Panorama to Canberra airport, the long way around to make the best of quiet, interesting roads. The sports Audi is surprisingly well balanced for a car with an engine a fair way forward. Indeed, we had to lift the bonnet to check this wasn’t a front-mid layout.

It corners at speeds double the suggested for most corners without trying particularly hard, with the quattro system’s optional sport diff playing its part. (Don’t try this at home … a race track is the best way to explore limits, but we had excellent mapping of the road route we followed.)

A less obvious area of advancement through technology in recent years is the ability to build a car with sporting suspension and sexy-looking low profile tyres that is still reasonably comfortable. Some of the backroads we traversed had seen better days, but the S4 sedan and Avant wagon soaked up the lumps and bumps pretty well. A soft-riding limo it’s not, but passengers will seldom experience any real discomfort.

There’s some engine turbo lag, but it really has been reduced to a minimum thanks to the installation of the turbocharger within the ’V’ of the engine. Once the lag is past, acceleration is immense and sure to bring a smile to your face as it makes for very safe overtaking. With maximum torque coming in at a ridiculously low 1370 revs hills cease to exist.

Audi S4 is a technologically advanced sports sedan, or wagon, at a relatively low price. One for the short list of anyone who wants efficient family transport that also provides driving excitement.