Mazda continues its relentless way in the sales race in Australia, this time with the introduction of more powerful versions of its halo sportscar the brilliant little MX-5.

The MX-5 has been famed since its introduction way back in 1989 for having excellent balance and handling, but somewhat down on power. Now the engineers have made major changes to the 2.0-litre versions of both the MX-5 roadster and the RF (Retractable Fastback).

These changes cover the full gamut of the design and see its output significantly increased from 118 kilowatts to 135 kW. And the lifting of maximum revs from 7000 to 7500.

Everything from the air intake, through the combustion chamber, to the exhaust system has been extensively revised. There are lighter reciprocating components, reduced internal friction and faster gas flow.

Though extra torque is harder to achieve than straight out power it has been raised from 200 Nm to 205 Nm and is over a wider band of the rev range.

Just as importantly, indeed probably even more importantly, the sound and overall feel of the engine have been improved. It now has a sporty growl and is beautifully responsive to throttle inputs.

But an even louder growl, perhaps with some aggression added, would suit us even more. Greedy, aren’t we?

We were very impressed with the engine and suspension improvements on a scenic drive route put on by Mazda Australia to launch its heavily revised machine to the motoring media. This took us from Coolangatta airport in Queensland into Byron Bay in NSW and back again over some demanding twisty roads through hilly areas that are still green thanks to good rainfall in recent weeks.

The first thing we did on getting down into the little roadster was adjust the steering wheel for not only height, but also for reach. Mazda’s guys and gals have finally listened to complaints that the lack of in-and-out movement of the wheel. Being able find tune my position within the MX-5 made it feel even more as though I was part of the car. 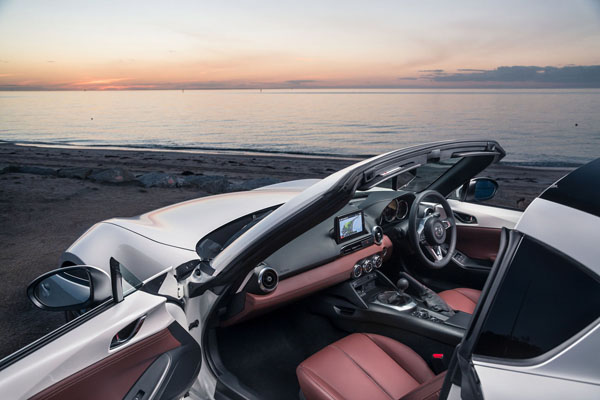 However, it has to be said that there’s still now quite enough room for my lanky 181cm frame. The seat has to be all the way to the rear, and the backrest was touching the body behind it. And – no fault of the car this – my ageing knees weren’t keen at getting my backside down into the car, and even less obliging at getting back out again. Try before you buy if you’re not as young as you used to be…

The sports Mazda is even sharper in its handling feel than ever before – and that’s saying something – with sharper delivery of the torque. There have been no changes to the suspension, but keep in mind that there were signification alterations to the suspension tune that we reported on in February this year.

The styling of the gen-four Mazda MX-5, the ND series, is basically unchanged, but new-design 16-inch black wheels are an obvious feature. Keep in mind that, as mentioned earlier, Mazda Oz introduced a restyle only a few months back.

Note that the technical knowledge learned while working relentlessly on the 2.0-litre Mazda MX-5 powerplant have been carried across to some extent to the smaller 1.5-litre unit. However, its power is only up from 95 to 97 kW, and torque increased by 152 Nm, up by just 2 Nm.

The free revving nature of the smaller engine has long endeared it discerning drivers but we have had the opportunity to experience the upgraded 1.5 at this time. We look forward to getting into one sometime soon. Note that the smaller engine is now only offered in the standard version of the MX-5 roadster, not in the slightly more upmarket GT or in the retractable fastback.

Mazda’s relentless pursuit of perfection in all its models is nowhere more evident than in the engineering advancements in this latest edition of its halo car, the built for fun MX-5.