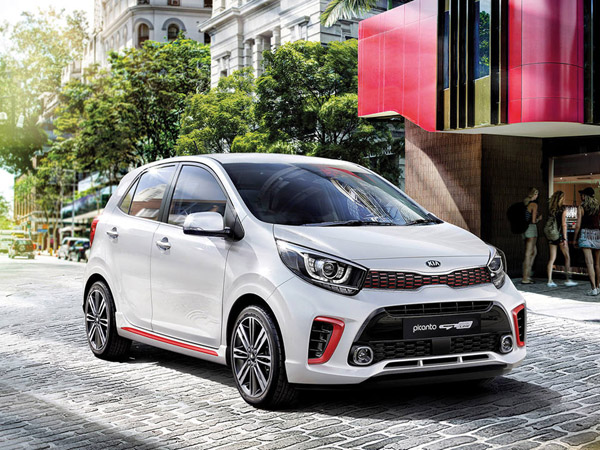 Since it was launched 12 months ago, the Kia Picanto has taken up a position at the leading edge of the Australian light-car market. In January that edge was sharpened with the addition of a special edition, designated GT-Line, to mark Kia’s sponsorship of the Australian Tennis Open.

Such was the popularity of the sporty Picanto, the new ‘top seed’ has been made a permanent fixture of the team, at $17,290, plus on-road costs.

The Picanto GT-Line is available in automatic only and comes in Clear White or three premium colours ($520 option), Aurora Black, Titanium Silver or Signal Red. The test car was Clear White with stylish red embellishments. 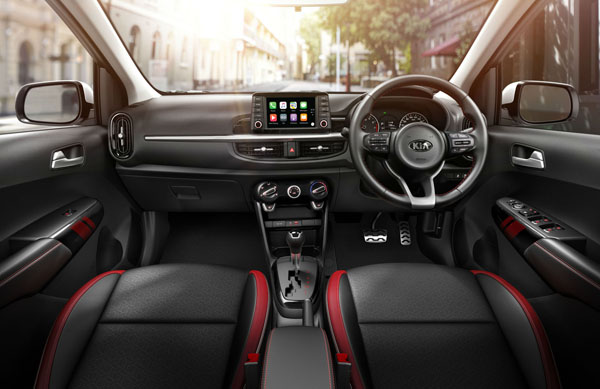 STYLING
In pedigree terms, the Picanto owes more to the Italian stand-tall styling of the Fiat 500, rather than the squat British Mini stance.

The wheelbase is relatively long, 2400 mm, so the wheels have been positioned more to the corners of the giving the Picanto not only reasonable internal space, but also a generous hug to the road.

There is no mistaking the Kia GT-Line’s pedigree, with strong, straight lines across the front of the car emphasising the company’s trademark ‘tiger-nose’ grille and new wrap-around headlamps. Vertical lines of the side air intakes and a separate lower grille reinforce the Picanto’s confidence in its new ‘face’.

At 3595 mm, the latest Kia Picanto is no longer than its predecessor, but side skirts and a sculpted body surfacing appear to have stretched the car. The wide C-pillar are quite upright, combining with a longish rear overhang to give this tiddler a confident look.

INTERIOR
Predominantly horizontal, the design adds visual width to the interior, highlighting a bigger cabin. The dashboard is more central, with a 7.0-inch touchscreen appearing to float above the centre console enabling many of the car’s controls to be moved higher into the driver’s line of sight.

A satin silver strip runs across the dash for a quality look, with large, vertical air vents bookending the front of the passenger compartment. The base of the dashboard has been moved upwards by 15 mm for greater knee room for front occupants.

INFOTAINMENT
The 7.0-inch touchscreen at the centre of the dashboard is available with Apple CarPlay and Android Auto for full smartphone integration. A rear-view parking camera with dynamic guidelines is also standard.

ENGINES / TRANSMISSIONS
The GT-Line is driven by a 1.25-litre engine producing 62 kW of power at 6000 rpm and 122 Nm of torque at 4000 rpm. The engine drives the front wheels through a four-speed automatic transmission.

SAFETY
The stronger (by 44 per cent), lighter body is backed up by six airbags – front, front side and curtain – as well as a range of active safety features.

These include standard vehicle stability management with electronic stability control for driving confidence under braking and cornering.

DRIVING
Kia’s renowned Australian ride and handling team has gone through the Picanto. With the longer wheelbase, presenting a more refined ride, sportier characteristics and decisive steering. However, potholes still result in the odd bang from time to time.

The GT-Line, especially front on, looks the part of a sporty little hatchback but just cannot squeeze enough power out of the little motor to get the driving juices flowing. It’s competent enough tootling around town and that’s it.

Despite the maker’s claim to have improved cabin insulation, the latter was accompanied by a deal of tyre noise from the concrete surfaced roads, as was the case on course bitumen road surfaces.

The straight-backed stance means there is ample head room in the rear for average-size passengers and the ability to maximise the 255 litres of luggage space. This is easily increased to 1010 litres by folding the 60:40 second-row seat backs.

Picanto is ostensibly a five-seater, but shoulder space out back is very limited with three adult passengers abreast. Legroom in the rear is minimal if tall folks are in the front.

The headrests are adjustable vertically, rare in this grade of vehicle.

SUMMARY
For those who don’t mind paying a premium price for a little car with a name like a pizza, the addition of the GT-Line to the Picanto range as a permanent offering is a chance to stand out from the pack. And the seven-year warranty weighs in with a huge bonus.