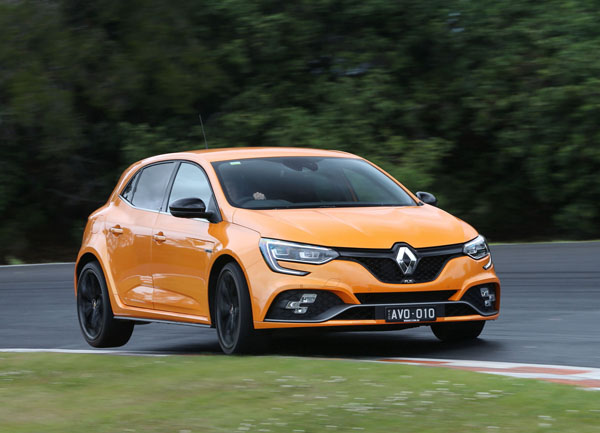 Renault’s latest hot-hatch is the Megane R.S. 280, a full on sprits machine which is now in its third generation. It has the latest in powertrain technology, chassis tuning and aerodynamic assist.

This is a serious machine that’s aimed at the keen driver who wants to get the best from their motoring life. Though it has to be said the stunning styling and excellent colour choices mean it will also appeal to the person more interested in serene cruising than in track days.

Power comes from a hot 1.8-litre four-cylinder turbo-petrol engine that’s tuned to the stage that it should be run only on 98 octane premium fuel. It produces up to 280 horsepower, hence its name. That’s 205 kilowatts in Australian numbers. Torque is a strong 390 Nm which is reached at a relatively low 2400 revs and continues to 4800, even after that it still remains at a relatively high figure.

Transmission is to the front wheels by either a six-speed manual or seven-speed dual-clutch automatic.

On the manual versions, you can choose between two types of chassis, the standard Sport or the pretty serious Cup model. The latter is slightly lighter and even more focused in its intent.

The interior features sports front seats with bolsters that support without being overly aggressive, aluminium pedals and a multi-mode instrument layout.

DRIVING
South East Queensland turned on a brilliant early spring day that perfectly suited the test-drive program arranged for us in the new Megane R.S. This took place from the Norwell Motorplex in the sugarcane growing area of Woongoolba, though the suburbs and then up through the hilly areas of Canungra and back again.

Forget the Comfort mode in the R.S. even in day-to-day driving it’s likely to prove just too sluggish in acceleration and the feel of the steering is light and dead. 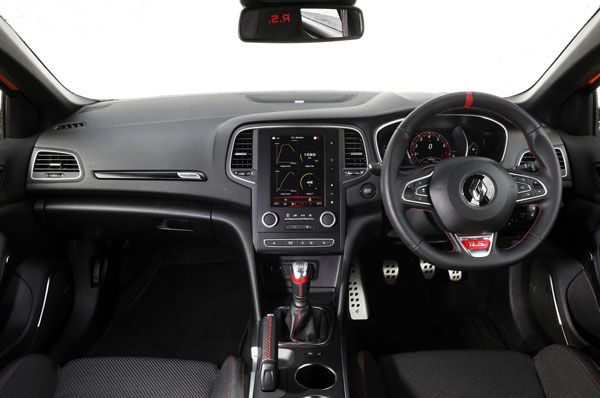 Once into Sport, though, the quick Megane really comes into its own. The engine takes on a lovely growl, does all the right snap-crackle-pop things during downshifts and when decelerating.

The dual-clutch auto is lightning fast and responds almost instantly to paddle shifts. Left on its own it’s generally in the correct gear, but we do prefer cars where the paddles move with the steering wheel rather than being fixed to the column.

Then there’s the four-wheel steering. It takes a few minutes to really settle into the way it operates, and you tend to turn the wheel too much. But once you adapt to it you immediately feel the steering is just way it should be. For starters the fast ratios mean you can keep your hands in the one position on the wheel at all times, with the sole exception of very tight hairpin bends.

Road grip is enormous and you would really have to be pushing extremely hard to bring in the electronic driving aids.

Which brings us to track use…

Fresh from the Canungra run we spent a couple of excellent hours at the Norwell Motorplex, which is a driver training centre not a racetrack. We gradually worked up from familiarisation laps with a lead Renault Clio piloted by a professional driver showing us the way.

This was followed by hot laps on our own with the R.S. set in Sport mode.

Finally we donned crash helmets, pushed the Race mode button on the screen and had an excellent final session with the Renault doing none of the work to keep itself on the straight and narrow – or rather the curving and narrow.

As Norwell isn’t a race circuit there aren’t always the run-off areas you get on modern dedicated tracks, so getting something badly wrong you can hurt the car, though probably not yourself due to the plethora of secondary safety features.

Going hard in Race mode you can really feel the R.S. talking to you through the steering and by the feel of well bolstered semi-race seats. The four-wheel steering really does help the Renault through the bends and the fast steering ratio means you can keep your hands on the quarter-past-nine position at all times.

Engine response is excellent and the manual gearbox is fast and light in use. Pedal height makes heel-toe work simple. The brakes haul off speed so well that I initially found myself braking too early, once getting really stuck into it confidence in them increased.

SUMMING UP
The brilliant Megane R.S. 280 is definitely one for your short list if you love driving. A combination of sheer driving pleasure and standout styling is offered for a relatively modest price.