“What on Earth is Audi thinking of?” was my reaction to the invitation to attend the launch of the A5 and S5 Cabriolets – in Adelaide at the end of winter.

Feeling smug when stepping off the plane in SA I muttered, “I told you so,” under my breath as I battled against a wind that felt like it was directly from the Antarctic. The outside temperature was nine degrees, and dropping…

I was wrong. After taking a brave pill we powered down the soft top of a sleek new Audi A5 Cabriolet that was in a stunning blue shade. Settled ourselves in, turned on the seat heaters and the clever devices that blew warm air onto the back of our necks.

The mesh-type Audi air blocker was installed behind the front seats – turning it into a definite two-seater and we kept the windows up.

It was warm in there. Cosy, comfortable and perfectly acceptable for a fascinating day’s drive through the Barossa Valley to Victor Harbor and back to the airport. Audi’s designers really have given us a car for all seasons.

The new Audi A5 and S5 are the third variants in the virtually all-new range, following on the sedan and coupe which were introduced in March and May respectively this year.

Styling is excellent, an impressive feature being the almost invisible ‘shut’ lines that give a smooth swooping ‘wave-line’ from front to rear.

New grille designs follow the latest sharper corners and add to the apparent width of these convertibles.

Cleverly, the Cabriolets look almost as good with their soft top up as down. This is something that’s not easy to achieve given the tight space they have to be folded into. And, let’s be honest, even the keenest of open top drivers tend to have the roof closed most of the time, so good closed looks are an appealing factor. 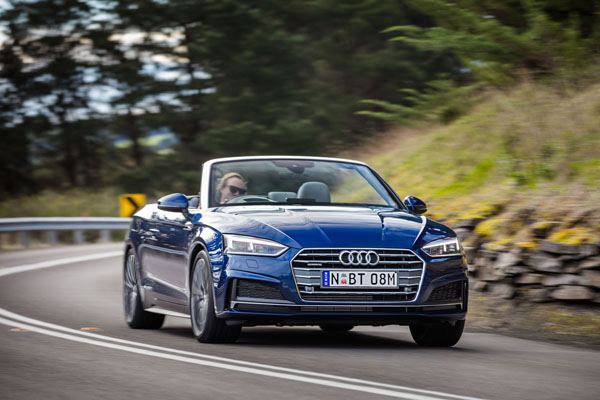 Longer overall and in the wheelbase than the outgoing model, the new Audi Cabriolets have better space in the rear seats than before. Not that I’d like to make an extended trip back there, mind you.

As is the norm in this class, the lost width in the rear due to the folding soft top means there are two seats, not three.

Boot space is good for a convertible and we found it could take three cabin bags. The drop down area that houses the open top is powered up and down, not done manually. Love it.

The roof opens in just 15 seconds and takes 18 seconds to get back up again. It can be opened and closed at up to 50 km/h by touching the respective switches just once. However, this feature doesn’t work when stationary. A somewhat odd arrangement to our way of thinking. 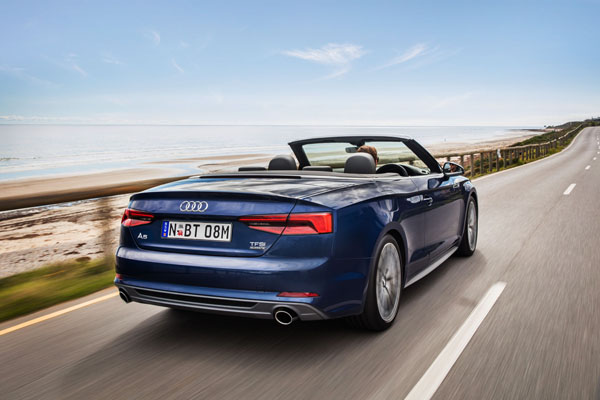 The Cabriolet’s infotainment system has an 8.3-inch high-resolution colour monitor. This can be duplicated to some extent in the central panel of the three-mode Audi virtual cockpit. There’s MMI navigation; Google Earth and local search; a DVD drive; a 10 GB flash memory; two card readers; Aux and USB connections. Smartphone interface integrates iOS and Android.

Audi A5’s model range comprises a two-wheel-drive (front wheels) with a 2.0-litre four-cylinder turbo-petrol engine with 140 kW of power. Torque of 320 Nm comes in at an impressively low 1400 revs and stays at that level till 4200 rpm. Changes are most drives will have the engine at full grunt virtually all the time.

Audi S5 is very much the sporting Cabriolet and produces 260 kW, and 500 Nm from 1370 to 4500 revs. A little bird tells us a hotrod RS5 could reach us Downunder before Christmas. 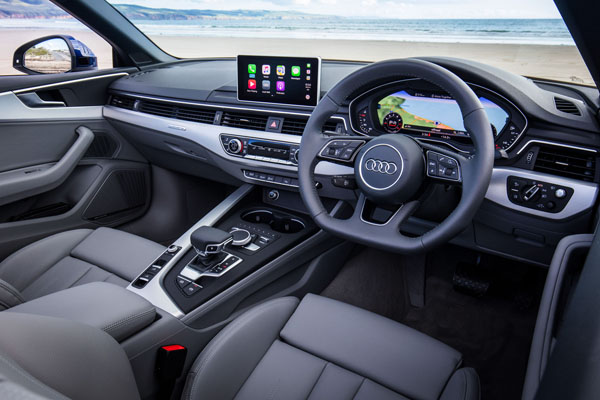 All new generation Audi Cabriolets have automatic transmissions, with a seven-speed dual-clutch mated to the 2.0 engines in the A5, and an eight-speed torque convertor unit in V6 powered S5.

DRIVING
As with other new-gen A5 variants the Cabriolets are lighter and more rigid than their predecessors thanks to the modular platform. There is some mild scuttle shake on rough roads, but on the whole you almost feel as though you’re in a sedan.

Obviously there’s some wind noise with the top down, but its muted to the level that lets you enjoy the sound without it overpowering conversation.

With it closed it’s remarkably quiet as a lot of engineering has gone into not only the soft top itself, but also into thicker windscreen glass and other enhancements.

There is some wind rustle around edges of the windscreen with the roof but even cruising at 100 to 110 km/h it was minimal.

Engine performance from the 185 kW unit is likely to be more than enough for the majority of drivers. Power comes in quickly with a minimum of lag and the transmission quickly senses the need for more urgency and shifts down a cog or two to add to the torque being supplied by the engine.

Handing is fine for a grand tourer, with a near neutral feel and plenty of electronic assistance to help the Cabriolet around bends at speed. We haven’t had chance to sample the sporting S5 at this stage, but will get hold of one asap and report pack to you.