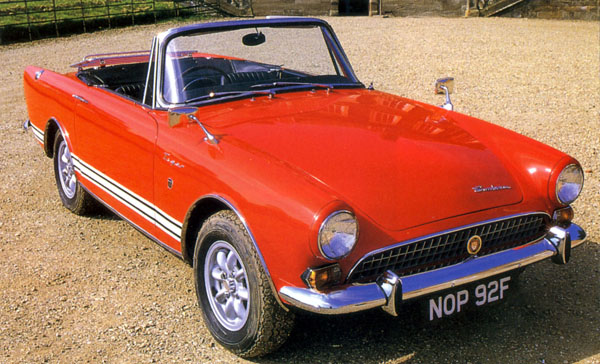 The four-cylinder Sunbeam Alpine had a very attractive open body and sold well right from its initial release by the Rootes Group in 1959. No doubt motivated by the success of the AC Cobra, discussions were held with American Carroll Shelby, who set about to carry out initial engineering to allow the fitting of a V8 engine to the Alpine body.

After the initial considerations Rootes’ engineers took over and out came the four-cylinder 1592 cc engine and in its place went a Ford V8 of 4.2 litres. To couple this to the rear wheels a new four-speed gearbox and beefed-up final drive were added. Being much bigger, the V8 engine required extensive re-engineering under the bonnet and stiffening of the body shell.

The Sunbeam Tiger came onto the market in 1964, but because of its low volume was not produced on the high volume Alpine production lines. Instead Rootes sub-contracted the assembly job to Jensen, located just up the road in West Bromwich.

Jensen was famous for its own big V8 GT, the CV8, and was also producing the big Healey for BMC. The fitting of the V8 engine meant that the Tiger had an increase in power from the 72 kW of the Alpine to 122 kW, making the Tiger a very different kind of car from the modest little Alpine, even though their exteriors looked identical except for differing badges.

The Tiger’s top speed was 187 km/h and it accelerated from 0 to 96 km/h in 9.5 seconds with such a huge increase in torque that a gearbox was almost superfluous. The big V8 was a tight fit under the Tiger’s bonnet and overheating proved a problem.

However the increase in performance came at a cost. The Tiger was no car for the novice. The Hillman-derived suspension was not entirely satisfactory as it was never really up to the job because of the increased engine power, even though the car had been fitted with a Panhard rod and optional limited-slip differential. As well, the hastily derived rack-and-pinion steering was of somewhat dubious quality which did not help matters. Tigers were often modified their owners in an effort to overcome some of these deficiencies.

In spite of the shortcomings, the Tiger sold well in America. It wasn’t offered in Britain until 1965 and in 1967-68 Rootes introduced the Mark II version with a bigger 4.7-litre engine from the Ford Mustang, which had a 150 kW output and raised top speed to 201 km/h. This model had wider gear ratios and was easily distinguished from the earlier model by its body stripes and egg-crate grille. The powerful Tiger, with its relatively light bodywork, was a natural in racing and rallying, though it was never fully developed.

When Chrysler took a controlling interest in Rootes the Tiger’s life was cut short. The new management did not like the fact that it used a Ford engine and as no Chrysler V8 would fit it, production was halted. In total 6495 Mark I and 571 Mark II cars were built and today these cars are still sought after as a cheaper alternative to the AC Cobra.