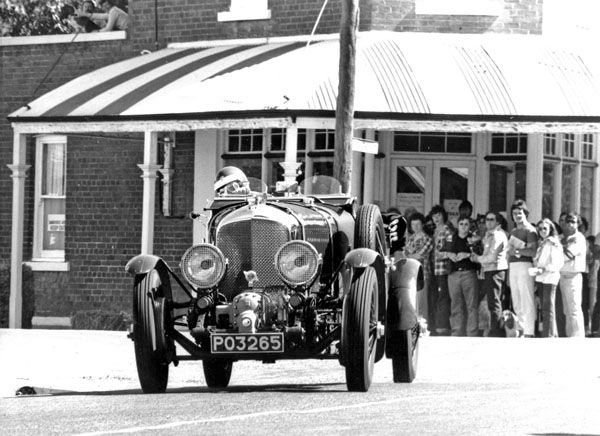 Although the Blower’ Bentley was a symbol of the excellence of British engineering and was, in its day, every boy’s dream racer, it was shunned by its designer, W O Bentley, a former locomotive engineer, who believed that engines were everything. If a car needed more power he believed it better to enlarge the engine rather than tune it for better performance. But due to this belief Bentley paid a heavy price for his love of massive powerplants. The chassis and tyres of his cars suffered from having to carry heavy machinery at high speeds over the rough roads of the 1920s.

Earlier, in 1914 when war broke out and Bentley found himself designing rotary aero engines, Bentley’s role in Britain’s war effort was significant. He persuaded most other aero- engine makers to use his advanced new aluminium alloy pistons. At the end of the war in 1918 a payment of 8000 pounds enabled him to establish Bentley Motors in a small factory at Cricklewood, North London. The engine of the first Bentley was a magnificent affair. Although it had only four cylinders, it was very efficient, with an overhead camshaft operating four inclined valves per cylinder and a five bearing crankshaft and, as you would expect, aluminium pistons. The engine capacity was 3.00-litres driving a separate four-speed gearbox and featured a sturdy chassis.

Following World War l there were 45 other British firms which had started making cars and Bentley was finally convinced by his star driver that a lighter, more highly tuned engine was necessary to keep ahead of the opposition without imposIng impossible demands on the chassis and tyres. When Bentley gave in and built his most famous car, the supercharged 4.5-litre, it cost him his company.

To cater for the heavy coachwork which many customers built on to his chassis he built an experimental six-cylinder 4.5-litre Bentley in 1925 which was later bored out to 6.5-litres to compete with the more powerful Rolls-Royce.This engine ran far more silently due to a very expensive camshaft and pioneered the use of rubber engine mounts. But the cost of development was enormous and Bentley Motors found themselves in financial difficulties until 1926 when they received backing from a racing driver with Kimberley diamond mining connections.

With this additional finance W O Bentley was able to design a new four-cylinder 4.5-litre engine, using technology from both the 3.00-litre and 6.5-litre, to produce 82kW but this was raised to 97kW in its most exciting guise for most customers. There was, however, an even more sporting 4.5-litre Bentley, the famous Blower’ model of 1929, in which the engine had been redesigned by Amherst Villiers, following encouragement from the racing driver Sir Henry Birkin. W O never liked the concept, but reluctantly allowed a few cars to be built. Since the Le Mans 24 Hour race was for production cars a production run of 50 was needed to be eligible to compete in 1930. Although an unsupercharged 4.5-litre won Le Mans in 1928, the Blower’ could never match this.

Whenever Blower’ Bentleys competed they were very fast. But many were forced to retire with broken engines in races such as Le Mans and this cost Bentley their reputation for reliability. The production run of only 50 cars proved financially crippling and Bentley Motors went into receivership. They were bought out by Rolls-Royce in 1931 and their racing days were over.