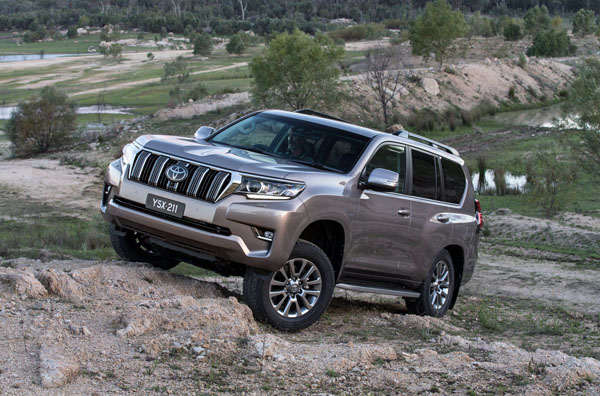 It seems like an eternity since I drove my first Toyota Prado. Since the original Prado
debuted in 1996, it has clocked up more than 300,000 sales, making it Australia’s best-
selling SUV over the past 19 years.

Now in its fourth generation, the current model was launched 13 years ago, so it is not
surprising that it’s starting to show its age.

Prado was last updated in 2020, with more power for the engine and add-ons across the
range, but when you get down to it — it’s basically the same old car.

STYLING
The style hasn’t changed much since they squared it off a few years ago.

For grades apart from GX, customers can choose between having the spare mounted on
the tailgate or hidden under the rear of the vehicle.

Note, however, that the latter option replaces the second or sub-fuel tank, which reduces
the total fuel capacity from 150 to 87 litres.

This won’t be an issue for city dwellers, but could give country folk pause for thought,
especially those in outback locations where fuel stops are few and far between.

Our test vehicle, top of the range Kakadu, is very well equipped. It has leather accented
trim, three-zone climate air, keyless entry and start, tint for the rear windows, and a tilt-
and-slide sunroof. 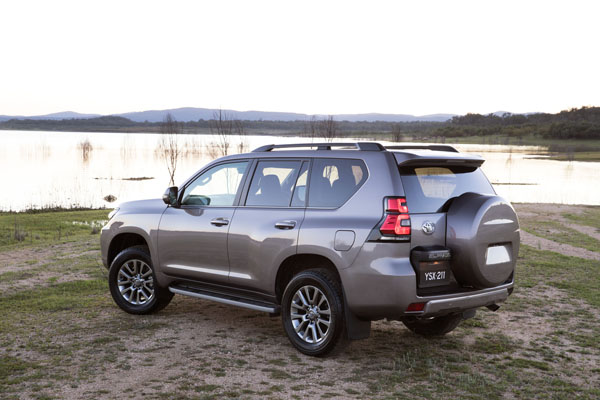 There’s also AM/FM/Digital Radio with premium JBL 14-speaker audio plus a 9.0-inch rear
seat entertainment system with three pairs of wireless headphones. Good luck sorting out
who gets the headphones with five in the back.

ENGINES / TRANSMISSIONS
All four grades are powered by a 2.8-litre four-cylinder turbo-diesel that produces 150kW
of power and 500Nm of torque.

It’s paired with a six-speed auto (with paddles shifters in the Kakadu) and drive to all four
wheels through a full-time four-wheel drive system, with high and low range and lockable
Torsen-style centre diff.

SAFETY
It has seven airbags and a five-star safety rating. The pre-collision safety system includes
autonomous emergency braking which can now detect cyclists during the day and
pedestrians night and day.

Prado’s lane-departure alert system now offers steering assistance by applying the brakes
to one side of the vehicle to help prevent it drifting unintentionally into another lane.

Newly adopted road-sign assist can recognise speed-limit changes and can reset the
cruise-control to take a new limit into consideration.

DRIVING
The turbo diesel produces 20kW more power and 50Nm more torque than before which is
a significant increase, especially the torque.

The extra performance comes from a new ball-bearing turbocharger with a larger turbine
and impeller, and improved engine rigidity and cooling.
At the same time, it achieves better fuel economy thanks to optimised pistons and piston
rings, changes to the cylinder block and head, higher fuel-injection flow rate and the
adoption of high-performance materials for the exhaust manifold.

The tailgate window does however open independently for quick access. Because the
swing tailgate opens sideways it can be a handful to operate if the vehicle is standing on a
hill.

Prado is not a car that likes to be rushed, either on or off road, in a straight line or through
corners.
The turbo takes a second or two to spool up, then torque comes on hot and strong with a
rush, adding some unpredictability to throttle response.

Importantly, overtaking is still not the easiest of manoeuvres, requiring some planning and
spending too much time on the wrong side of the road.

Ride is cushy, old school, bordering on rolly-polly, thanks to softish suspension and high
centre of gravity, although you can adjust the suspension by switching drive modes — with
Sport+, Sport, Normal, Eco and Comfort modes from which to choose.

The beige/blonde wood interior trim dates the car, as do the analogue instrument gauges.

Off-road Prado is a force to be reckoned with, able to tackle the rough stuff, without cause
for concern.
Kakadu gets the clever, Aussie-designed Kinetic Dynamic Suspension System and Multi-
Terrain Select system. When it senses a wheel drop, the system can disengage the
stabiliser bars allowing opposing wheels to move independently of each other.
It’s the difference between having a wheel spinning uselessly in the air or that wheel on
the ground where it can help to push the vehicle forward.

With crawl control activated, all the driver has to do is steer, even in the roughest
conditions.

Prado can tow a 3000kg braked trailer, van or boat.

It is covered by a five-year warranty with two years extended engine and driveline
coverage.
Capped price servicing is $260 per service up to three years, with complimentary map
upgrades for 3 years.

SUMMING UP
Toyota Prado is an ideal vehicle for family adventure, with a braked towing capacity of
3000kg and strong off-road capability.

Fortuitously, we’re preparing to embark soon on an outback adventure, from Broome in
Western Australia to Darwin in the Northern Territory, along the Gibb River Road.

We’ve been tossing up between renting a Prado or Mitsubishi Pajero Sport. Personally, I
don’t mind the Pajero Sport, but it’s more of a budget focused 4×4.

Prado will cost more, but frankly it’s worth it just for the extra fuel tank capacity, which
means if we want to take an unplanned detour — we won’t need to worry about having
enough fuel to get back.