In a time when gas-guzzling pickup trucks and SUVs are dominating sales in Australia it’s great to see that Subaru has introduced the next generation of its neat little BRZ coupe.

And it’s a proper sports machines in that it’s driven by the rear wheels, not the front. More about that in a moment.

The original design was very successful so Subaru has been smart in sticking to a similar shape.

But it’s not just about looks, the new model not only looks great but is also more aerodynamic.

All the vents, fins, and spoilers are functional, working to reduce turbulence.

Cabin storage is rather limited, again because this is quite a small coupe.

There’s only a single drink holder in the manual due to tight space on the console and room that’s taken up by the gear lever.

Automatic models have two centre console drink holders. There are small bottle holders in each door.

A split-folding centre console box houses a 12V outlet, while USB ports are under the climate functions.

This standard is generally regarded as more accurate than the SAE measurements used by most car makers.

The speakers provide good quality sound during normal driving but can be drowned out a bit when on rough roads and on concrete motorways.

The Subaru flat-four boxer engine is a 2.4-litre unit, up by 20 percent in capacity over the previous model.

Transmissions are a six-speed torque converter automatic or six-speed manual.

Both have been revised from their predecessors, to not only handle the extra power and torque, but also to provide smoother shifts. 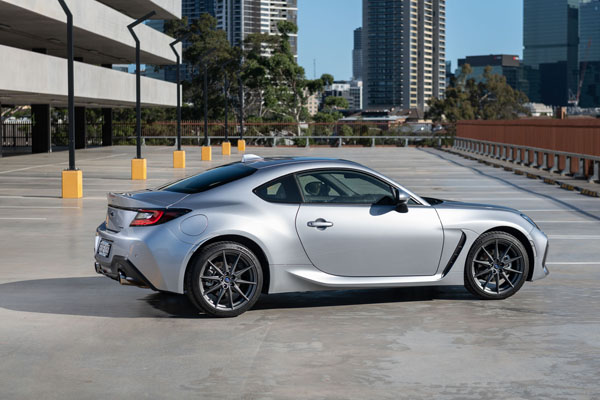 Unusually, we were given two cars to test for one week each, manual and automatic.

Drive is sent to the rear wheels via a Torsen limited-slip differential.

This is the only Subaru that doesn’t have all-wheel-drive, which is a major selling point of the company.

Seems like Toyota had the most powerful argument about this.

The Subaru stereo-camera-based EyeSight safety is now in the BRZ.

The BRZ has no fewer than seven airbags; front, side, and head, plus driver’s knee.

We averaged 10.0 litres per hundred in the manual and 9.3 in the auto.

It needs to run on premium unleaded 98 RON petrol which is often sold at 15 to 20 cents more per litre in our home areas of Brisbane and the Gold Coast – which is a major rip-off.

Unusually these days the BRZ has a full-size spare wheel. Pretty handy if you’re considering track days and need to carry extra spares.

The two rear seats are all but useless for adults. Which is hardly a complaint considering this is a small sports coupe.

Kids can travel in them but if you’re planning to do so frequently make sure to take them along on your test drive before deciding to buy a BRZ. 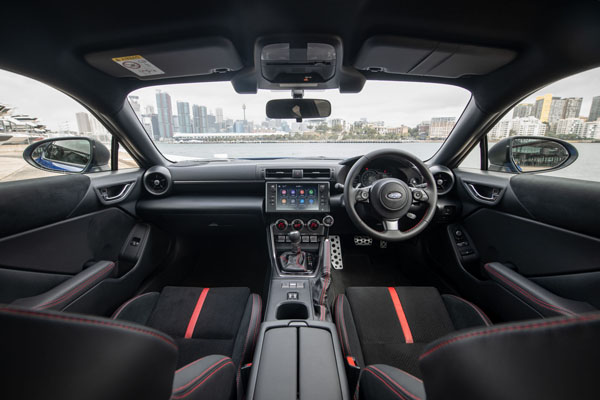 I’m tall in the body and found the headroom to be less than I like, so didn’t have the driver’s seat set as close to the floor as I normally would.

If you’re considering buying a BRZ to drive on track days there’s a further problem when you wear a crash helmet.

As I’ve said before, try before you buy and don’t forget the skid lid.

The sales guys at the dealership may find it odd when you turn up for a test drive – or perhaps see it as a compliment to their car.

The front bucket seats provide comfort for normal day to day use and have good lateral support for hard driving.

Even driving the BRZ on sealed country road it feels nice and solid. One bumpy dirt roads it’s perhaps stiffer than passengers would like.

The driver has the steering wheel to help support them and it’s better.

We didn’t drive on dirt roads as the BRZ isn’t likely to be sold to anyone who’s in that sort of country.

The larger engine has consistent torque through the rev range and this helps to provide a notable jump in responsiveness.

The engine’s smooth and quiet at in normal driving speeds, only when you get up to higher revs does it have the definite beat of a boxer engine.

Tyre noise is low on smooth roads but can become quite noisy when the roads are moderately rough you certainly feel the sounds rise, acceptable for a sporty car.

Subaru BRZ is something out of the ordinary these days – which is good to see in these times gas guzzling pickups and SUVs.

It has excellent handling plenty of poke from the engine, particularly when it has a manual gearbox sitting behind it.

Manual or automatic transmission, which would I prefer? Simple; automatic for city and suburban running, manual for a nice fang in the bush.

Would I buy on? Probably not, because my ageing knees don’t like getting in and out of this low-slung machine.

Note: These prices do not include government or dealer delivery charges. Contact your