A superb top-of-the-line 590hp Maserati Levante has just been released to those who love owning an Italian supercar that’s surprisingly good in harsh off-road regions.

Called Trofeo it’s the first Levante to be built around a V8 engine and one of the fastest SUVs ever, boasting a top speed of 304 km/h at a ridiculously short 3.9 seconds to reach 100 km/h.

The Levante Trofeo is equipped with a 3.8-litre V8 that’s a re-engineered and upgraded version of the engine fitted in the flagship Quattroporte GTS. It delivers 590hp (441kW) at 6250 rpm and the huge 730 Nm torque peak (or should that be torque plateau?) all the way from 2500 to 5000 rpm.

Like any other petrol Maserati engine it has been developed by Maserati Powertrain in cooperation with Ferrari.

The chassis of the fastest Levante has been tuned to handle the higher power output. The Integrated Vehicle Control (IVC) system has been incorporated for the first time in a Levante for impressive driving dynamics, better performance and genuine Maserati driving pleasure. 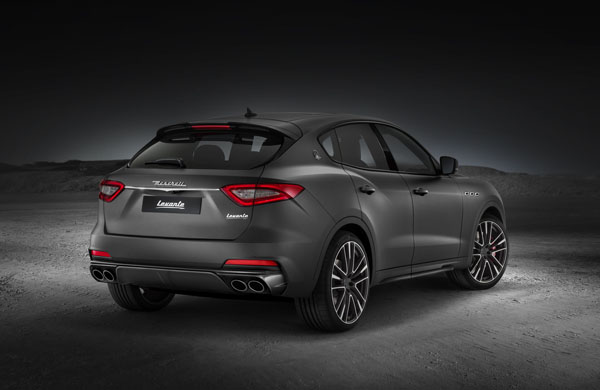 Restyling is mainly focused on the lower front fascia and the rear bumper and is underlined by carbon fibre design cues and 22-inch forged aluminium “Orione” wheels – the largest ever fitted on a Maserati.

The sculpted sport seats feature a premium full-grain Pieno Fiore leather. The natural tanning treatment ensures it develops its own characteristics and a uniquely personal character over time.

The development of a V8 Levante started as a skunkworks project by the Maserati technical centre in Modena, well before the official launch of the SUV model in 2016. Without informing the headquarters in Viale Ciro Menotti 322, the engineers built a V8 prototype intended to test the performance limits of the Levante platform.

That unbranded V8 “mule” prototype was an inspiration for the top management to proceed with the development of a super Levante built around a twin-turbo V8 engine.

In May 2017, Maserati engineers and testers were sent around the world to test the first V8 “mule” prototypes in diverse road and extreme weather conditions, ranging from the proving grounds of Balocco, Nardo and Barcelona to the twisty, desert or icy roads of Sierra Nevada, South Africa, Arizona and Lapland.

The long-term testing activities covered extreme environments and climates ranging from -35°C to well over 40°C.