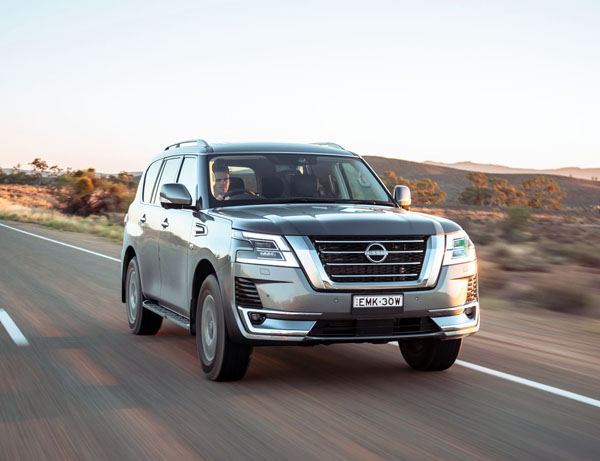 Like a couple of Sumo wrestlers from their native Japan, Toyota LandCruiser and Nissan
Patrol have been grappling with each other for more than 70 years.

The SUV (Sports Utility) tag really doesn’t fit these two giants, they are old-style, off-
roading 4WDs. They’re right up-to-date in terms of engineering and safety but lag behind
in technology, although in the case of the latest LandCruiser that has been addressed with
the new 300 Series.

The latest, sixth generation, Patrol has been here since late 2019 with a minor upgrade for
the MY2022 version that we’ve just tested.

Patrol is only available in two premium variants, the Ti and Ti-L, priced at $82,160 and
$95,115 (plus-on road costs), respectively. Both are powered by the same 5.6-litre V8
petrol engine with seven-speed automatic transmission.

STYLING
The recent trend towards coupe-like SUV styling has been by-passed with the Patrol
designers sticking with the traditional square corners and avoiding any fussiness. There’s
more chrome than some may prefer but to our eyes it really works well.

Sidesteps are almost a must for a vehicle of this size especially for smaller passengers.
Wheels are 18-inch all-terrain alloys.

INTERIOR
Unsurprisingly there’s lots of space in every direction inside the Patrol although, as is
normally the case, the third-row seats are best suited to children. Patrol Ti is a 2-3-3 eight-
seater while the Ti-L is a 2-3-2 seven-seater. All seats are leather.

Access to the third row is made easier with the second-row seats able to fold and tumble
forward.

With the third row of seatbacks in place there’s 467 litres of storage space, expandable to
1413 litres with the third-row folded flat. That increases to a van-sized 2632 litres with the
middle row rolled forward against the backs of the front seats.

The front seats are large, supportive and very comfortable. Both driver and front
passenger get eight-way electric adjustment as well as heating and cooling. The driver’s
seat has a memory function.

There is a deep centre console cool box which can be accessed from either front or
second-row seats.

The instrument cluster is clear and uncomplicated, and that’s just the way we like it.
Everything is easy to find and operate with minimal distraction. 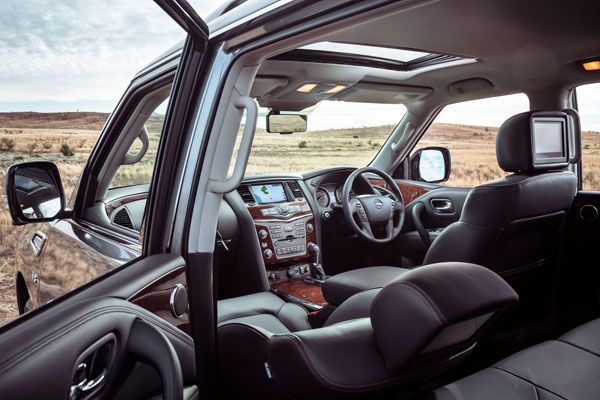 ENGINES / TRANSMISSIONS
Power for Patrol comes from a direct-injected, naturally aspirated V8 petrol engine that
delivers 298 kW of power at 5800 rpm, and 560 Nm of peak torque 90 per cent of which is
available from 1600 revs.

Power is put to ground through an advanced seven-speed automatic transmission and a
sophisticated, electronically controlled, all mode 4×4 system with settings for Auto, 4H, 4L,
diff lock and hill descent control.

INFOTAINMENT
Patrol’s infotainment system is showing its age. There’s an 8-inch touchscreen with
satellite navigation and traffic monitoring system but other features are limited and,
unusually, there is no Apple CarPlay or Android Auto compatibility.

The audio system has CD/DVD, AM/FM radio (no DAB+), MP3 and USB / iPod
connectivity with Bluetooth phone and audio streaming. There are two USB ports and a
12V socket at the bottom of the front console and two USBs in the rear.

DRIVING
Getting into the Patrol involves a bit of a climb for the less agile with the combination of
sidestep and grab handle coming onto play to assist.

The next chore is releasing the parking brake which, unfortunately, is of the old-fashioned
foot-operated variety.

Once underway though, these two little annoyances are quickly forgotten – at least until
the time comes to pull up alongside the petrol bowser.

On the open road it’s smooth, composed ride and exceptional occupant comfort make it an
ideal long-distance cruiser. The 140-litre fuel tank will stretch the distance covered but,
with fuel prices soaring there will be a nasty shock at the bowser.

SUMMING UP
Patrol is the most luxurious and sophisticated Nissan offered in Australia and although it’s
showing its age in many ways it provides a top-class drive on and off road and can double
as either a luxury people mover or tow vehicle for pulling large boats or horse floats.

All Nissan models now come with the five-year, unlimited kilometre warranty with free
roadside assistance during that same period.