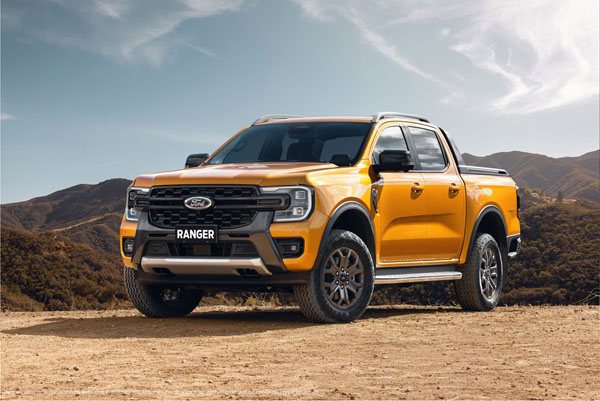 Australian specifications of the next generation Ford Ranger have been announced. It’s
highly regarded here as it has been specifically designed and developed for this country to
suit our Aussie drivers, particularly in ride and handling.

Whether a customer’s priority is fuel economy, refinement, towing or hauling, the
powertrains chosen for Next-Gen Ranger will provide customers with compelling
performance and capability, according to Pritika Maharaj, Ranger and Everest program
manager.

The highlight is the addition of Ford’s proven 3.0-litre V6 turbo-diesel, which is being
offered on both Ranger and the Everest SUV. “We’re offering this engine specifically
because some customers told us they wanted more power and torque for towing and
extreme off-roading,” said Maharaj.

Ford engineers treated the 3.0-litre V6 turbo-diesel like a brand-new engine, resulting in
184 kW of power at 3,250 rpm and 600Nm of torque from 1,750-2,250 rpm in both Ranger
and Everest. “We did a lot of application calibration and validation work in both the US and
Australia to make sure it would meet the needs of Ranger and Everest customers,” said
Maharaj.

“The 3.0-litre V6 turbo-diesel delivers,” added Maharaj. “When you drive a Ranger with the
V6 turbo-diesel, it feels like a much bigger truck. And it feels strong in the sense that it’s
got plenty of power and torque, which is exactly what our customers told us they wanted.”

In addition to the 3.0-litre V6 turbo-diesel, the Ranger will also offer the Single-Turbo 2.0-
litre and the Bi-Turbo 2.0-litre inline four-cylinder diesels. 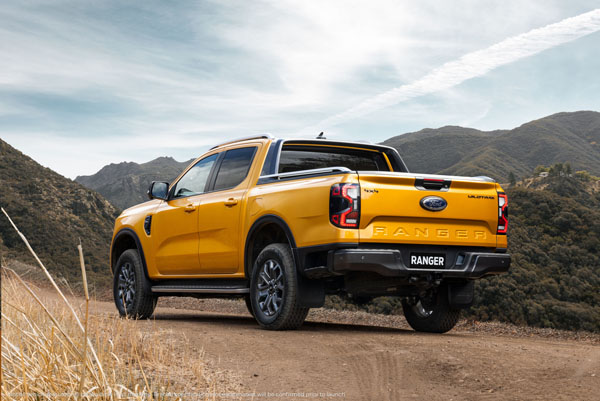 The bi-turbo makes 154 kW at 3,750 rpm and 500 Nm from 1,750-2,000. It has a bypass
system that determines the optimum operating mode, meaning the turbochargers can
operate in series (at lower engine speeds for enhanced torque and responsiveness) or the
smaller turbo can be bypassed allowing the larger turbocharger to deliver high power.

Transmission choices include a 10-speed auto that’s available on the 3.0-litre V6 turbo-
diesel and 2.0-litre Bi-Turbo engines. The current six-speed automatic transmission
available on Ranger will continue with the 2.0L Single-Turbo.

“Our customers told us that one of the reasons they love Ranger is because it’s one of the
best vehicles on the road for ride comfort and car-like performance. So, retaining that and
balancing it with off-road performance has been key throughout the development of Next-
Generation Ranger,” said Rob Hugo, dynamic experiences supervisor, Ranger.

A 50mm track and wheelbase increase for Next-Gen Ranger has improved vehicle stability
on- and off-road, said Hugo. It has also improved the unladen front approach angle and
unladen rear departure angle.

The track increases the width of Next-Gen Ranger’s tray which now fits a Euro pallet.

The rear dampers were moved outboard of the springs which makes for a more controlled
ride whether the vehicle is laden or not.

“The outboard dampers have allowed us to tune a more controlled ride whether the vehicle
is carrying a heavy load or not and solve a common complaint of pickups with inboard
mounted dampers that they can bounce or skip when unladen,” Hugo said.

There’s room under the bonnet for an optional second battery.

The Wildtrak can be fitted with an optional auxiliary switch bank (standard on Raptor)
making it easier to install accessories like driving lights, a winch and more. Moulded slots
in the bedliner allow you to ?t dividers to customise the tray, allowing you to store gear and
stop it from sliding around.

Ford is offering two four-wheel drive systems for Next-Gen Ranger. The base four-wheel
drive is a ‘part-time’ system with a two-speed electronic shift-on-the-fly transfer case
offering 2H, 4H and 4L as modes of operation. Next-Gen

Ranger is also available with an on-demand four-wheel drive system (2H, 4A, 4H, and 4L)
which allows Ranger to be driven in four-wheel drive on high-traction surfaces via its 4A
(automatic) mode. When selected, the system continuously distributes power between the
front and rear axles for optimum performance in all on-road conditions.

The Ranger continues to be offered with an electronic rear differential lock which can be
activated via the SYNC 4A13 screen. A differential lock allows both wheels on a specific
axle to turn at the same speed providing additional traction when you’re off-roading.

The latest Ranger will offer up to six, depending on the variant. The modes are: Normal,
Eco, Tow/Haul (auto only), Slippery for on-road, and Mud/Ruts and Sand for use off-road.
These modes adjust everything from the gearshift to throttle response, traction and
stability controls, ABS and more.

“These selectable drive modes are a very simple way of getting advanced traction to the
wheels the way it needs to be delivered without having to be an expert,” said Hugo.

Tow/Haul mode is a brand-new drive mode and is designed for those towing or carrying a
heavy load in their Ranger. Selecting Tow/Haul mode optimises the gear shift timing to
maintain power when you’re climbing up a hill or deliver the right amount of engine braking
when you’re travelling down a hill. The latest Ranger continues with a maximum braked
towing capacity of 3,500 kg with a 350 kg tow ball download limit.

Next-Gen Ranger, depending on the model, now has an integrated trailer brake controller,
trailer connection checklist and trailer light check to simplify the process of hooking up your
trailer. Driver assistance technology allow for drivers to programme the size of their trailer
for added coverage of their blind spots.

In addition to the selectable drive modes, the Ranger boasts a dedicated off-road screen
on the SYNC 4A13 infotainment system. At the press of a button, owners can access the
off-road screen, which shows driveline and diff lock settings, steering angle, vehicle pitch
and roll angles.

Now that the latest Ford Ranger is on sale in Australia, we will borrow one, perhaps two,
and publish our thoughts and shortly afterwards. Stay tuned…

Prices will be announced in mid-April when orders can be made. Delivery is expected in
June.