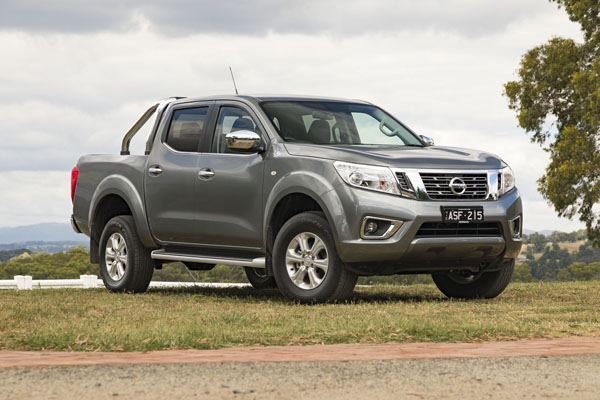 Australia may not be Nissan’s biggest ute market but it is one of its most knowledgeable. That is hardly surprising given our love-affair with utes and the remarkable fact that it leads the pack when it comes to new vehicle purchases.

It’s no secret that Australians expect a lot from their utes – work vehicle and leisure mobile, family carrier, weekend warrior, 4WD-adventurer, dump hauler – the list is almost endless. But we also want a vehicle with creature comforts and performance cred.

Nissan has updated the Navara to iron out suspension bugbears, largely based on Australian feedback, and we took the dual-cab ST home to see if they hit the mark.

STYLING
The Navara keeps its chunky muscular style with a no-nonsense nose, bold wheel arches and carefully sculpted tweaks to add a touch of softness. Interestingly, the change to the rear suspension is visible in the flesh with the tray of the dual-cab ute sitting noticeably higher, rather than dipping slightly like the Navara it replaces.

The interior tells that familiar tale of function and simplicity with the Nissan Navara featuring an uncluttered dash, effective instrumentation and uncomplicated controls. The 7.0-inch colour touchscreen feels a bit on the smallish side , but it will do, and there are enough storage options to keep most people happy.

There are reasonable comfits for those in the second row too. It is a touch tighter back there than the accommodations in some competitors and the seat feels slightly shorter but the kids are hardly going to complain – they will be too busy playing with the sliding glass window that gives access to the tub. Rear air-vents are a considerate inclusion while new IsoFix clips in the outer rear seats reinforces the family-friendly brief. 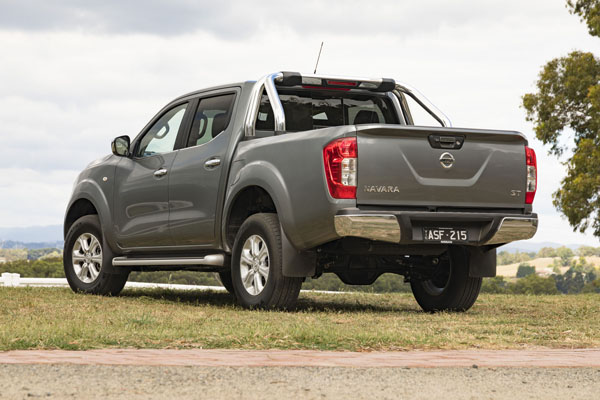 The tray in the ST is long and deep with the wheel arches not detracting from its usefulness. It is as adept at carrying camping gear and the family’s bicycles as it is at hauling tools and yes, those pesky palm fronds, so happy days.

Tonneau covers (soft and hard) are an optional extra but I would definitely spring for one so at least you can carry stuff without it all getting rained on.

INFOTAINMENT
A 7.0-inch colour touchscreen is the face of the Navara’s infotainment system. Connectivity is exceptionally easy, mapping is accurate and graphics are reasonable. The visual for the reverse camera can be a little grainy but it works well enough.

The system itself is easy to operate, radio sound quality is good and there is a USB connection and four 12V plug-ins should you need it. There is no smartphone mirroring for any ute in the Navara range at present. 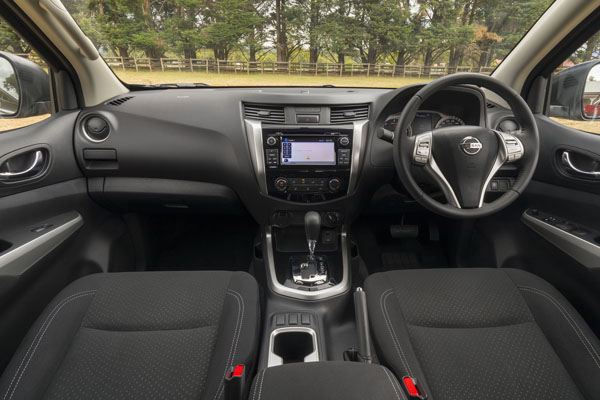 ENGINES / TRANSMISSIONS
Nissan Navara is offered with two diesel engines – a 2.3-litre single turbo (120kW/403Nm) or the twin-turbocharged unit that powered our test car. The latter is good for 140kW of power and 450Nm of torque and was paired with a seven-speed manual transmission.

It is a not a quiet blighter, especially when working hard and can feel somewhat underpowered at times. It is, all said and done, a capable performer though – even when weighed down – provided of course you don’t expect it to do 0-100km in five seconds.

SAFETY
The Navara received a five-star ANCAP rating in 2015 and in addition to seven airbags, traction control and EBD, the 4X4 also gets a Redarc brake controller for towing, hillstart assist and hill descent control.

Rear parking sensors are only available in the range-topping ST-X but all models would benefit from them as well as blind-spot monitoring, and autonomous emergency braking which is rumoured to be on its way.

DRIVING
OK, so the whole reason for this mid-cycle update was to improve the way the Navara felt on the road especially under load. The coil spring rear suspension was criticised for being too soft when this Navara was released in 2015 and the steering response too slow and dull.

Nissan tried to remedy the suspension criticism by introducing new rear dampers the following year but there were still murmurings (OK, shouts) of unhappiness from the rank and file.

Now, Nissan has revised the suspension with stiffer dual-rate springs and introduced a faster gear ratio for steering too so you can feel like you are having some impact on the turning wheels.

Certainly, under load, the Navara feels much improved with less wallowing and definite move away from the jiggling towards a better defined strut and confidence in its ability. It settles quickly over bumps, rights itself without fuss and doesn’t bottom out when least expected.

The compromise though is that without a load in the back, the dual-cab Navara is not as cushy for backseat passengers as the one it replaces. We are not talking organ-jarring escapades here but you definitely feel more than the odd bump.

That aside, Nissan Navara is a steady performer erring on the side of guts rather than grace but perfectly willing. The driver’s seat is pretty comfortable despite seeming quite flattish in appearance and we did a four-hour stint without complaint from the small of the back.

The Navara is fairly good in the economy stakes too with our test week (7.8L/100km) keeping it within spitting distance of the official 7.0L/100km figure. Nissan offers a three year/100,000km warranty with capped price servicing for the first six visits. Service intervals are 12 months or 20,000km.

SUMMING UP
At the very least consumers want to feel heard and plaudits to Nissan for not only listening to comment from the Australian market but also responding positively. The Navara is a healthy proposition in an environment in which one is spoilt for choice and these new tweaks are likely to support that position.