MG IS BACK – BUT NOT AS WE KNEW IT 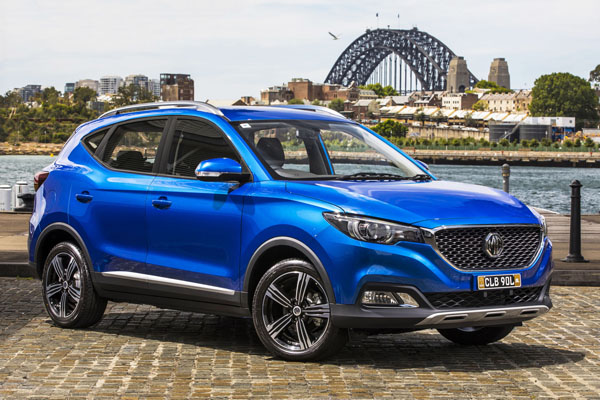 MG is best known for producing two-seat convertible sport cars. The name is an abbreviation for Morris Garages, has been around since the mid-1920s. Since that time ownership has passed to a number of different car companies including the British Motor Company (BMC), British Leyland, Austin, Rover and, since 2011, China’s largest automaker, the Shanghai Automotive Industry Corporation (SAIC).

Although you can be forgiven for not noticing it but Chinese MGs have been on sale in Australia since 2013 starting with the small-medium MG6 hatchback or sedan followed in 2016 by the MG3 city hatch city. With little or no marketing support sales of both have been negligible.

Given the current trend the logical next step was to enter the SUV market and this is now underway with the arrival of the mid-sized MG GS in early 2017 and the subject of our test the ZS compact SUV which followed at the end of 2017.

Two MG ZS variants are available with almost identical specifications but with different powertrains. The ZS Excite (previously called Soul) is priced at $20,990 and the Essence at $23,990 plus on-road costs in both cases. A lower-specced model called Core is expected to be added later this year. 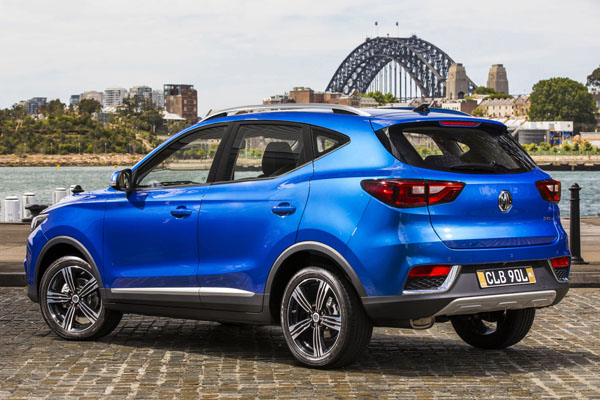 MG Essence adds a panoramic sunroof that extends almost the full length of the car and push button start/stop.

The only option with either variant is metallic paint at either $499 or $599.

STYLING
New MG ZS certainly looks the part. Its British designers have avoided the curves and swirls of many of its competitors and stuck to a traditional ‘two-box’ design. The large grille carries the traditional ‘MG’ badge in its centre. The badge also features prominently at the rear where it doubles as the boot opening handle.

Large wheel arches sitting around the 17-inch wheels do give a bit of gawky look. 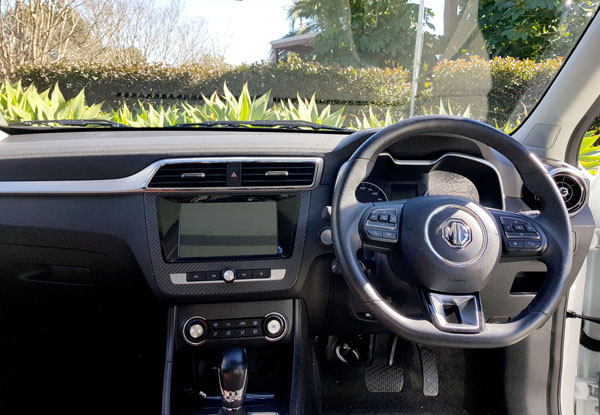 INTERIOR
For a vehicle of its external dimensions MG ZS is surprisingly roomy inside especially for rear seat passengers where the legroom is comparable to that of larger vehicles. The boxy shape provides good headroom even in the Essence with its panoramic sunroof.

Our main gripe was that the front seats are quite narrow which in conjunction with tall side bolsters can make it quite uncomfortable for larger occupants. While the steering wheel can be adjusted for height there is no reach adjustment.

There’s a real quality look and feel to the dashboard with carbon fibre trim while there’s a soft touch coating to the top. Then there’s that MG badge again, sitting prominently in the centre of the steering wheel.

Boot volume is 359 litres extending to 1166 litres with the 60:40 split rear seatbacks folded. The spare wheel is a 15-inch steel spacesaver.

ENGINES / TRANSMISSIONS
The MG ZS Excite has a naturally-aspirated four-cylinder 1.5-litre unit and four-speed automatic transmission; while the MG XS Essence has a more modern three-cylinder 1.0-litre turbo-petrol mated to a six-speed auto.

Like many in the compact SUV segment drive is only to the front wheels, there’s no all-wheel-drive option.

SAFETY
MG ZS only received a four-star ANCAP rating when tested in December 2017 due to a below average frontal offset test result. It doesn’t come with either autonomous emergency braking or lane departure warning.

INFOTAINMENT
The 8.0-inch colour touchscreen is just about the best of its size we’ve seen. It’s crystal clear, sharp and easy to use with a minimum of driver inattention. Bluetooth pairing is virtually automatic connecting when the smartphone locates the connection without any input from within the vehicle. Apple CarPlay is standard but not Android Auto.

There’s no embedded satellite navigation instead ZS uses a combination of smartphone and Google Maps.

DRIVING
There are three drive modes – Urban, Normal and Dynamic. Urban provides lighter and more responsive steering at low speeds and when parking; Dynamic, where we spent most of our time, tightening the steering and a higher damping effects for higher speed driving; with Normal sitting in between.

As with most of its rivals the MG ZS is aimed principally at urban drivers and it copes just as well as them around town. Even on the hilly terrain of the M1 motorway to the north of Sydney it ran smoothly and with an impressively suppressed level of road and wind noise.

During our rural drive we found that we could push through corners with more confidence than expected from a relatively boxy vehicle although there was a fair amount of body roll.

Fuel consumption is listed at 7.1 litres per 100 kilometres for the naturally-aspirated Excite and is significantly lower at 6.7 L/100 km for the turbo-petrol Essence. We averaged 7.4 L/100 km in the Essence that we tested.

We haven’t been able to test the MG Excite as yet but will endeavour to get into one up to Queensland asap for a comparison.

At present there are 17 MG dealerships, located in NSW, Queensland, Victoria, Western Australia and the ACT but with others likely to join them shortly.

SUMMING UP
Although it will struggle against its many big name rivals in the ultra-competitive small SUV segment the MG ZS has already made a promising start with just over 600 sales in the first half of 2018. No doubt some of these sales will have been because of the nostalgia attached to the badge but it also offers plenty more including an excellent value package, appealing looks and competent performance.

The big question-mark hanging over previous Chinese cars has centred around their build quality. SAIC has tackled this issue up front by providing ZS and future MG models with the security of a seven-year, unlimited kilometre warranty.