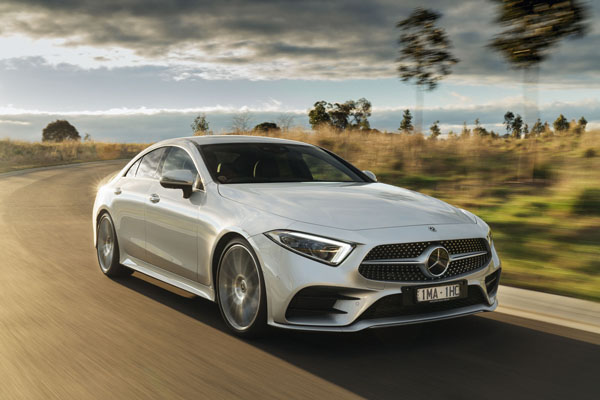 Mercedes-Benz CLS is a four-door coupe that has been a big seller in Australia almost since day one in 2003. At the time it created quite a sensation as it was argued by purists that a four-door car could not be called a coupe. The introduction of the stylish CLS resulted in a rethink of the definition, and we now have coupes with two, three, four or five doors.

STYLING
The third generation of the Mercedes-Benz four-door CLS Coupe pioneers a new design theme for the prestige car maker. It’s headed by a large diamond grille contour that widens towards the base, a forward-slanting front section, wide low-set headlamps and two-section taillights. The low greenhouse and frameless side windows certainly call out coupe.

Mercedes has long been a leader in aerodynamics design and the new CLS Coupe has a Cd (drag co-efficient) of just 0.26. This low figure results in a quiet peaceful ride and a reduction in emissions and fuel use.

INSIDE
Merc’s online system features a 12.3-inch high-resolution media screen for the Merc’s COMAND system. The screen sits alongside the electronic instrument panel to create an extra wide digital display. It can be used with Apple CarPlay and Android Auto . 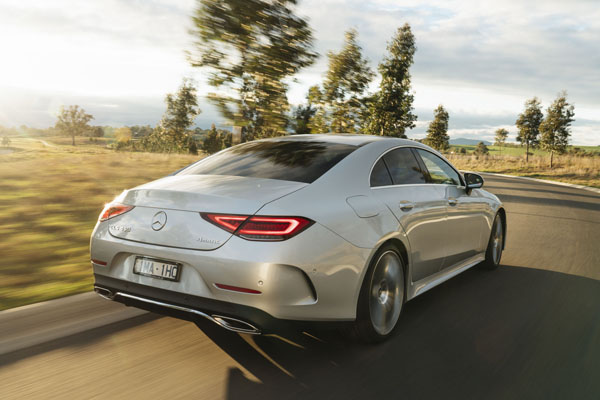 Mercedes CLS 450 4MATIC is the only one on sale at this time. It’s the first model outside the exclusive Mercedes-Benz S-Class range to be fitted with ENERGIZING Comfort Control, a series of in-cabin wellness programs.

Its climate control system has fragrancing; the seats have heating, ventilation and massage; and the steering wheel is heated. There are even lighting and musical atmospheres.

The new straight sixes replace the previous V6 engines that had to be introduced to make them shorter and allow space in front of them for crash protection. The new straight-six engines are more compact than the ones they replace so we now see a return to the silky smooth Mercedes engines of the past.

Both the new powerplants have EQ Boost technology, meaning there’s an integrated electric motor which adds more power and torque by way of energy stored in the battery. The battery is recharged when driving conditions are right which, cleverly, is most of the time.

As an example, the Mercedes-Benz CLS 350 has a four-cylinder bi-turbo engine that normally sends 220 kW of power and 400 Nm of torque to the rear wheels. This is boosted by an additional 150 Nm when EQ Boost kicks in. 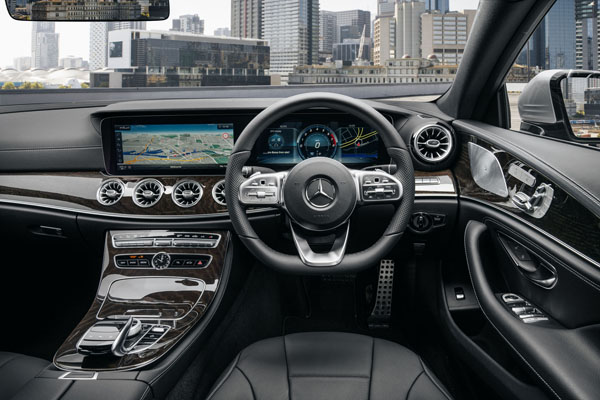 Similar torque improvements are achieved in the Mercedes-Benz CLS 450. It has a 3.0-litre straight-six bi-turbo engine and the 4MATIC all-wheel-drive system. It generates 270 kW and 500 Nm, with EQ Boost adding a further 250 Nm.

DRIVING
Our driving experience began in central Melbourne from “Mercedes me store”, the only one of its type in the southern hemisphere at this stage. A cafe and event space it’s not aimed at selling cars, but on being part of the cafe culture. While you can look at superb models of Mercedes old and new, photographs and even use the driving simulator we are assured no one will try to sell you a car.

We drove the CLS 450 through city streets further choked by a damaged crane threatening to collapse at any moment. Finally free of the traffic we drove out to Woodend by way of scenic roads in the Macedon and Hanging Rock areas, stopped for a coffee along the way then back by boring motorways to Tullamarine airport.

The big Coupe proved just about perfect for this sort of trip, cruising in a quiet relaxed fashion and with the delightful instant torque that’s provided by the EQ system to overtake safely and promptly when required.

Noise levels were low and the big tyres handled some rough n’ ready Australian country roads with nary a chirp even when pushed pretty hard.

Interior ambience is good, though I’m still not sure that I like the huge spread of screens across the dash. Obviously that’s a personal thing, so do your own private pre-purchase test drive and let me know what you think.

The Mercedes-Benz CLS 450 is on sale now, the CLS 350 and Mercedes-AMG CLS 53 4MATIC+ are will be available in November 2018. However if you’re interested in buying one it might be an idea to contact your favourite Mercedes dealer well ahead of that time.