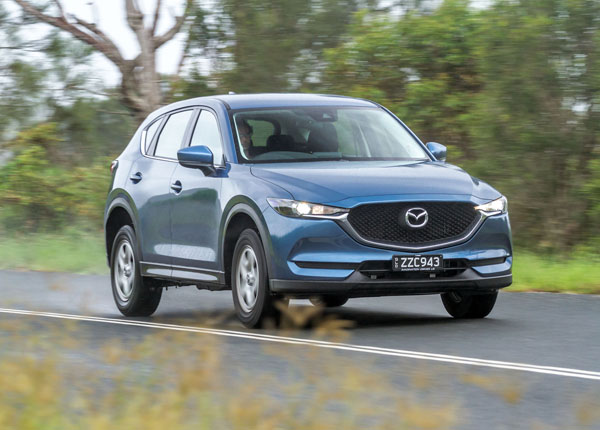 Mazda CX-5 has been a hit in Australia from day one when it arrived here just over five years ago in February 2012. Now the second generation has been introduced. And the relentless series of improvements that drive the Japanese marque mean it exceeds the original in just about every area.

Mazda Australia is very highly regarded by head office in Hiroshima so the chief engineer of the CX-5 program, Masaya Kodama came to Australia to introduced his new baby.

First let’s talk style as that was one of the biggest features of the gen-one Mazda CX-5 – indeed of all of the current range of Mazdas. The new CX-5 features a smoothing out of the original shape, almost to the extent of being minimalistic in its lines. It works exceptionally well to our eyes.

At a time when many marques’ stylists are coming up with over complex details, Mazda might be leading the field in the next generation of automotive bodies.

The CX-5’s grille is familiar, but different, and ties in with the lower areas. The doors have neat sculpting in their lower areas and the C-pillar treatment is interesting. If there’s one thing we aren’t keen on it’s the rather small rear lights. Then again, beauty is in the eye of the beholder, so pop along to your Mazda dealer and see what you think.

Inside, the central screen is a good size, the instruments are sporty in their layout and the dash sits quite a long way forward to give the visual appearance of added space.

A new model has been added to the already comprehensive CX-5 range. Called the Touring, it sits between the Maxx Sport and GT. Potential buyers really are spoiled for choice as Mazda Australia is very keen to further increase its sales from the 115,000 that have hit Australia’s roads to date. 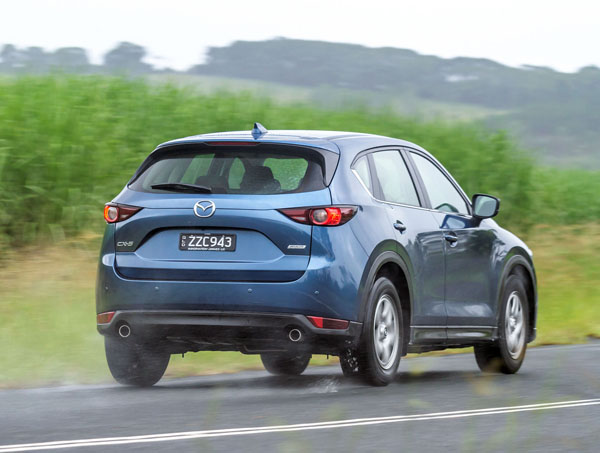 There’s comfortable seating inside for four adults, with a fifth being possible without too much hip and shoulder rubbing. However, it’s very much a 40:20:40 layout and may not suit all. The back seats can be set at two angles to let those back there assume their preferred position, as well as to juggle luggage / passenger space. Large armrests are a feature we really liked in the front.

Boot space, at 442 litres, is good and easy to load, with a spacesaver being used to give added depth.

Infotainment from the Mazda MZD Connect system via a 7.0-inch touchscreen includes AM and FM, as well as DAB+ radio. There’s Bluetooth hands-free phone and audio, Aux, and USB. Control is through steering wheel buttons for many functions, there’s also Mazda’s handy Comander rotary controller.

Satellite navigation is optional on the CX-5 Maxx but standard on all other variants.

Power comes from a range of engines, all using Mazda’s SkyActiv technology. Though based on the powerplants of the outgoing CX-5, they have significant improvements. The 2.2-litre turbo-diesel puts out up to 129 kW of power, with 420 Nm of torque at 2000 revs. The 2.0 petrol has 114 kW, and 200 Nm at a highish 4000 rpm. Note that Mazda Australia has again specified the engines be detuned slightly to suit Australia’s low-grade 91 octane standard petrol. 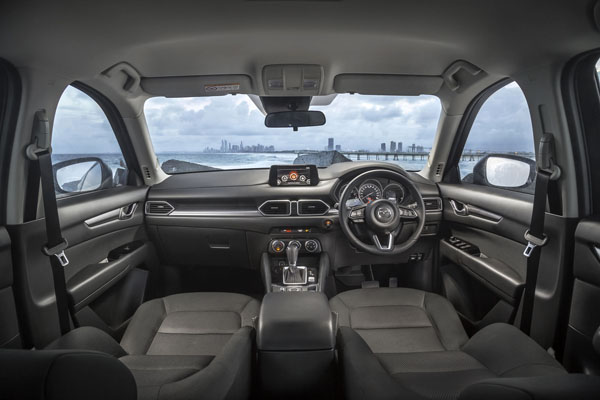 A six-speed manual is on offer with the smaller petrol engine, all others have a six-speed automatic transmission and this unit is also mated to the 2.0-litre petrol when requested..

Our initial two days of test driving arranged by Mazda for the new CX-5’s launch took place in a complex route from the Gold Coast, inland through the hinterland and out to Beaudesert, finishing up in heavy-duty peak-hour traffic in Brisbane. Next day it was a trip north through outer suburban areas, then to Brisbane airport along the coast road, with the highlight being Redcliffe. Yes, that’s varied and realistic.

We tried both the larger petrol and the turbo-diesel engine. The petrol was our preferred unit as its smooth, quiet and reacts fast to throttle inputs. While the turbo-diesel is quieter than average for its class it’s still audible from the outside, and has more turbo lag than we like.

The automatic is quick to sense driver demands and road conditions and shift to lower ratios when required.

The new Mazda medium-large SUV is spacious, quiet and comfortable to ride in and able to cushion occupants from the rough ‘n’ ready backroads. Though this isn’t classed as a sporty machine we did find the steering and handling to be softer than we like. And there’s not a lot of feedback through the wheel. Again, try for yourself as part of the pre-purchase test drive.

New Mazda CX-5 will sell on style alone and while it’s marginally more expensive than the superseded model we feel it still provides excellent value.