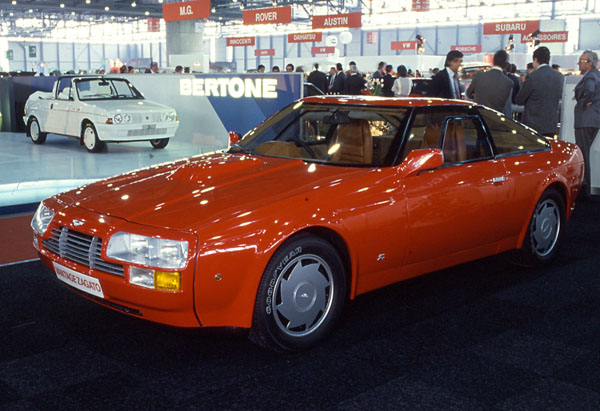 The Aston Martin company has had a truly chequered career. Over the years there have been a number of times when it looked certain to be going to the wall but on each occasion it was saved by fortunate circumstances ¬– like a major win of a title or at an important event.

In 1960 Aston Martin introduced their DB4GT Zagato, a great performing road-legal semi-competition car but one that proved difficult for the average driver to manage on the road and was outperformed by the Ferrari 250GTO on the racetrack. Following this Aston Martin went through one of its regular periods of instability.

In 1985 things started to look up again and Aston announced a new association with Zagato with the intention of building their fastest car ever. By fitting an uprated version of the Vantage engine into a smaller, lighter bodied car, they claimed they could produce just that. One that could easily compete with Ferrari’s latest Testarossa or GTO, or even the Lamborghini Countach QV. Many sceptics doubted Aston Martin’s claims but the company went ahead and accepted substantial deposits based on little more than a promise.

Released in April 1986 Aston Martin displayed not just a concept model but three fully trimmed and running production models. They had been built and trimmed by Zagato in Italy, with alloy and re-inforced polyester bodies on powered chassis shipped from the UK.

The Vantage floorplan was considerably modified for the Vantage Zagato as it was strictly a two-seater coupe with the familiar Aston Martin grille cleverly built into the smooth moulded nose. This was surrounded by four, large, rectangular headlights. The smooth bonnet line was only broken by the large bulge designed to accommodate the Vantage engine’s carburettors.

The new Zagato was significantly smaller than the Vantage and it was blessed with a far better drag coefficient. The 5.4-litre V8 engine with four overhead camshafts developed 322 kW and pushed the car to a top speed of 300 km/h. It was claimed to do the 0-60 km/h sprint in 4.7 seconds while still in first gear!

The Aston Martin Zagato, like the Vantage, was a very fast, very expensive and very beautifully finished motor and a credit to the marque.