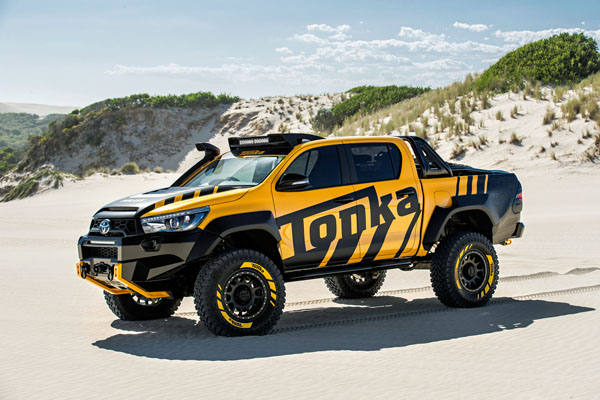 We’re all familiar by now with the ‘Mad Monday’ phenomenon where boofy blokes dress up in outrageous costumes and make pests of themselves to celebrate their sporting victories.

Having just taken out the motoring equivalent of a grand final win with its HiLux ute –
outselling all its rivals in the 2016 sales race – Toyota has decided to celebrate in ‘Mad Monday style by teaming up with toy truck maker Tonka to built an outrageously styled concept ute.

Both Tonka and Toyota are household names and celebrate significant anniversaries in 2017, Tonka its 70th anniversary and Toyota its 80th year of incorporation. 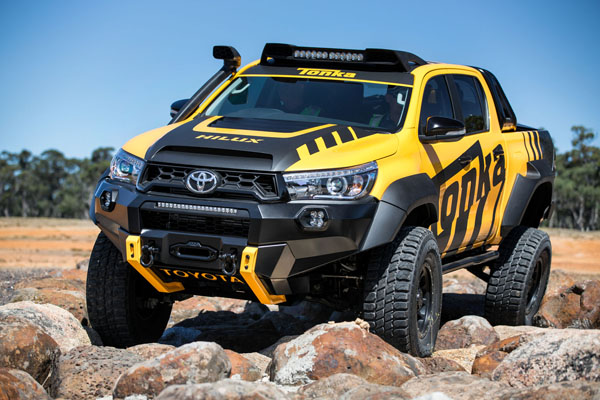 Toyota should get a free-kick out of the federal government’s recent decision to upgrade the Snowy Mountains hydro-electric scheme given that LandCruiser made its Australian debut in the early years of the original scheme.

The brainchild of Toyota Australia’s 150-strong product planning and development division, the HiLux Tonka Concept was built on the range-topping HiLux SR5 double cab with its 2.8-litre four-cylinder turbo-diesel engine. It was then given an extra 150 mm of ground clearance; high-riding axle; heavy-duty suspension and 35-inch diameter tyres.

The bonnet has a carbon-fibre skin topped by a large power bulge and air scoops. For underbody protection there’s a rugged bash plate made from 6mm-thick alloy while tubular side rails protect the body and chassis. 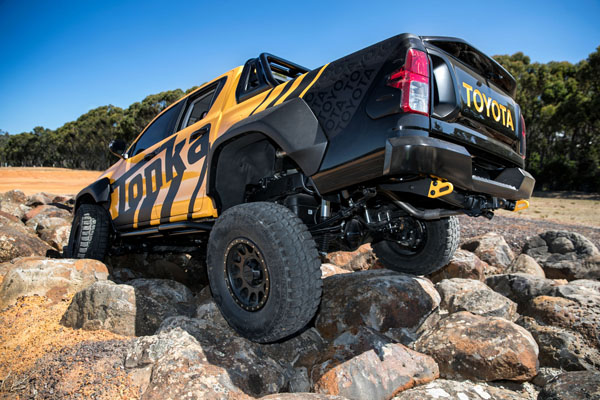 While the footy blokes go on a pub crawl, Toyota, with leading rally driver Rick Bates behind the wheel, took us on a mud and rock crawl at the custom-built indoor course at Sydney’s Australian Technology Park.

Sadly the Tonka HiLux is a concept vehicle and will remain so with no plans for it to go into production. Like the footy players though it will however be going on an end-of-season trip, taking in 4WD shows, field days and expos around the country.

What will be available is a new street version of HiLux built in conjunction with Toyota’s TRD (Toyota Racing Development) parts division. With more than half of all HiLux 4×4 sales the SR5 was clearly Toyota’s 2016 Player of the Year and so, like the Tonka, was the logical variant to be used for the TRD model. It has 15 new components over the standard SR5, seven of them from TRD.

The most notable addition is a bright red TRD-branded skid plate that sits below new TRD black grille, lower bumper cover and fender flares. There’s a black sports bar, black side steps and black mouldings at the leading edge of the bonnet and along the side. The rear features a soft tonneau cover, ute liner, taillight covers, TRD mudflaps and towing kit.

When it comes to exterior colours the choice is black and white.

Inside there are TRD carpet floor mats and leather-accented trim.

Power comes from Toyota’s 2.8-litre 130 kW turbo-diesel engine with a healthy 420 Nm of torque when mated to the six-speed manual and 450 Nm with the six-speed auto.