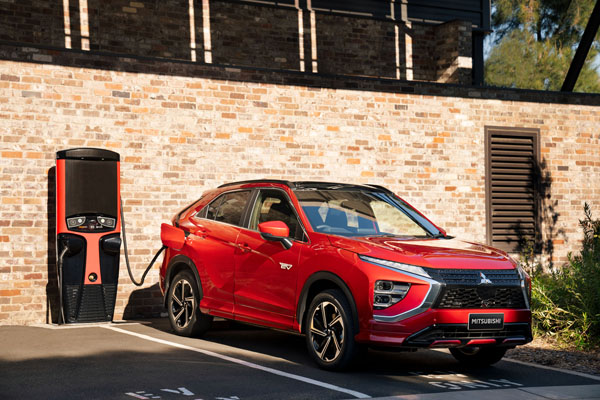 Mitsubishi’s plug-in hybrid Outlander has been around for going on 10 years. The plug-in
version of Eclipse Cross was launched just six months ago. It’s underpinned by the same
hybrid setup as the Outlander. It offers the same 55km of electric-only range – but it has
the advantage of being smaller and nippier.

Eclipse Cross sits between Mitsubishi ASX and Outlander in size.

STYLING
The Eclipse has grown in size and now offers a pleasant, comfortable cabin with room for
five, plus more rear legroom and a bigger boot than before.

A revised instrument cluster displays engine speed as well as EV charge levels and
battery use – but no digital speedo.

The heated seats and heated steering wheel are fairly superfluous in the context of our
environment. Unless you visit the ski fields that is.

Ventilated seats would have been a better option (and so would rear air vents). 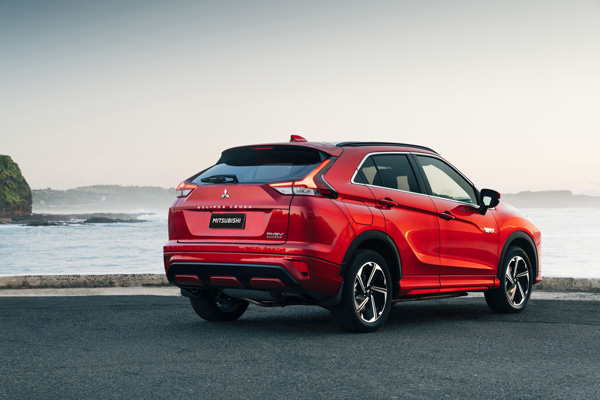 INFOTAINMENT
It has an 8.0-inch touchscreen, Bluetooth with voice control, AM/FM and DAB+ digital
radio, Apple CarPlay/Android Auto plus Mitsubishi Power Sound System that includes 8
speakers, 4 tweeters. Exceed is the only grade with built-in navigation.

Drive is to all four wheels through a reduction, single-speed transmission.

Multi-around monitor, blind spot warning, lane change assist and rear cross traffic alert.
Exceed adds ultrasonic miss-acceleration mitigation system. This reduces the chance and
severity of hitting obstacles when the driver mistakenly presses the accelerator when
stationary or at speeds of up to 10km/h. 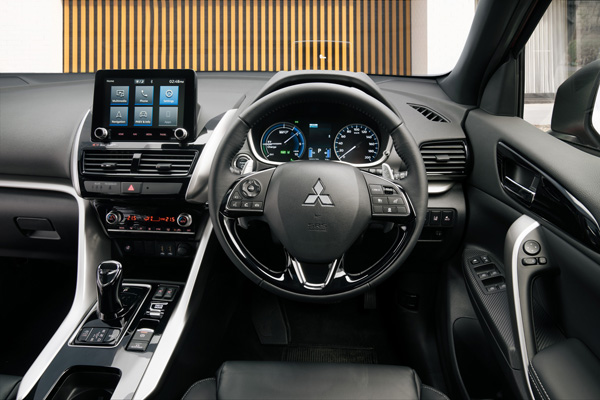 DRIVING
The Eclipse PHEV goes better than the figures might suggest, a bit of a rocket even. The
ride though is on the harsher side, even though they’ve done some work on the rear
suspension.

Steering and handling are at best uninspiring.

Throttle response is sharp thanks to the instant torque of the electric motors.

Claimed fuel consumption is just 1.9L/100km and it prefers 95 premium petrol, but will run
happily on 91. Unless you go to the trouble of charging the battery, fuel consumption will
be considerably heavier.

The trip computer tends to have a mind of its own – at least in our experience. As an
example, once the ‘refuel’ message pops up, the computer simply refuses to allow any
further access to data, keeping the long-term average a secret (4.6L/100km from
memory).

Mitsubishi argues that because the average daily commute is 32km, the plug-in’s 55km
range is more than adequate to deliver emissions-free commuting to “an overwhelming
majority of Australians”.

The 55km is under the old NEDC standard, the newer WLTP system it’s 45km (but 55
sounds better).

Basically, if you live in the ‘burbs, Mitsubishi is saying it’s enough to pop into the city and
back.

From a driver’s point of view, one could suggest that it’s costly and a lot of mucking around
for little return, and might have more to do with satisfying climate legislation than delivering
real world benefits.

If it was me, I’d be looking for a lot more range than 55km. I’d be wanting a much higher
return on my investment.

Because it’s a plug-in hybrid, you don’t need to worry about being stranded. When the
juice runs out, the petrol engine kicks in.

Running in EV Mode (available from 0-135km/h), the PHEV is powered by the front and
rear electric drive motors, drawing current from the battery.

In Series Hybrid Mode (available from 0-70km/h), the car continues to use the battery to
power the front and rear motors, while the petrol engine is engaged to run the generator to
charge the battery while driving.

This mode is also automatically activated when the driver wants maximum acceleration, or
for example when driving uphill or when battery charge is too low.

In this mode, the vehicle will attempt to revert to EV Mode as often as possible for
maximum efficiency and minimum emissions.

In Parallel Hybrid Mode (only available above 70km/h), the PHEV operates like a
traditional hybrid.
This means the petrol engine drives the front wheels in tandem with the front electric motor
via the multimode front transaxle, while the rear electric motor drives the rear wheels.
The vehicle is configured to revert to EV Mode or Series Hybrid Mode whenever possible.

Regenerative braking is available in all three modes and can be adjusted via paddles on
the steering wheel, with five steps that add drag when you take your foot off the throttle –
to send energy back to the battery.

If it all sounds a bit complicated, the good news is that you don’t need to worry about it.
The car takes care of everything.

Using the supplied cable and a regular 10A powerpoint it takes seven hours to fully
charge.

It has second cable for faster Mode 3 charging using a wall charger which takes four
hours, 0-80 per cent with a full-on commercial DC charger takes 25 minutes.

SUMMING UP
I like the concept, but I’d like it even more if the Eclipse had greater, all-electric range.

These cars are designed for countries other than Australia, where they typically travel
shorter distances, which explains the limited range – and that makes them a hard sell.

At $57K or so by the time you put the topline PHEV on the road, it’s also relatively
expensive.