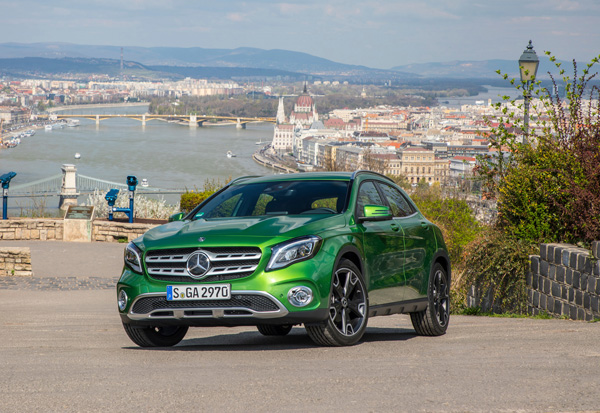 The Mercedes-Benz GLA is based on the company’s A-Class though no major external
parts are shared with it. However, many of the mechanical components are the same or
mildly modified.

As is common in this class the GLA-Class is better suited to two adults and three kids
rather than four grownups. But with some sharing of legroom, we carried four adults during
our road test.

The load area is a good size, but the rear seats disappoint in that the backrests don’t fold
down as far as we like. Try for yourself if you’re going to be carrying long bulky loads.
Though the sloping rear end steals some space from the load area, owners say they think
the compromise between style and load hauling.

The bold frontal style is appealing and has certainly been a major factor in sales success.
There’s nothing shy and retiring about the way the famed three-pointed star is displayed.
The definite swage lines in the sides work well and the taillights look as though they could
have been borrowed from big brother E-Class. The big rear diffuser gives the GLA a
purposeful appearance.

There are also 2WD variants, which drive the front wheels only. These are lighter and
slightly more nimble than the AWD models and frankly are all that most people need.

The GLA is taller than the A-Class and has greater ground clearance. In AWD guise –
4MATIC in Mercedes speak – it can tackle mild off-road running and make light work of
trips on rough dirt roads. Most are only used around town and for sealed highway trips so
it might be best to look for these on the used car market.

All engines are four-cylinder in-line turbocharged units sold in petrol or diesel format.
Strong torque is a feature of the diesels but the petrols aren’t too bad as they use the
latest in electronic technology to advance their torque to pretty good levels. The standard
Mercedes GLA-Class comes with a seven-speed automatic transmission.

Aussies just love the high-performance versions of European prestige cars so it comes as
no surprise that the Mercedes 45 AMG has been a big seller. It powerplant is surprisingly
small at 2.0 litres, but it has an impressive 265 kilowatts and 450 Newton metres on tap.
Naturally AMGs drive all four wheels through a seven-speed Speedshift double-clutch
automatic.

Handling is very good and works in a typically German no-nonsense manner. But keep in
mind this is a small SUV not a low-slung sedan or hatch. Electronic aids help get you out
of trouble should you get too ambitious when attacking bends.

Comfort is obviously not to the high standard of the big Benz sedans, but the GLA is still
pretty good for its class.

The GLA-Class received a minor rework in June 2017, with a facelift and interior revisions.

Mercedes-Benz has been well established in Australia for many decades, even in country
areas because Mercedes diesels have been longtime favourites with farmers. Check
around for a local dealer if you do live in the bush and are considering one of the German
machines.

Spare parts prices and servicing costs are higher than for less prestigious cars but not
outrageously so. We haven’t heard of any major delays at getting parts to outlying areas if
they aren’t held in stock.

A full-service record is common on Mercedes-Benz cars and adds to its second-hand
value.

WHAT TO LOOK FOR
Scars on the left-front wheel probably indicate meetings with kerbs whilst being parked –
often a sign of a sloppy driver.

Make sure the engine starts easily – diesels are slightly slower that petrols – and that it
settles into an even idle within a few seconds.

Look over the interior and the boot for indications of rough use, even upmarket kids can
cause damage when bored in the back seat.

We have heard of occasional electrical problems so try each item to make it works.
Chances are they have been sorted by now, but it’s still best to do a double check.

Sand and salt spray on the undersides are other signs a GLA-Class has been used as an
adventurous toy on the beach.

Few Merc GLAs are taken off sealed surfaces but check for scratches on the doors and
bumper corners. Under-car damage is a sign of serious off-road use.

CAR BUYING TIP
A magnet will be attracted to metal under paint but not to plastic filler used as a cheap
repair for minor crash damage.