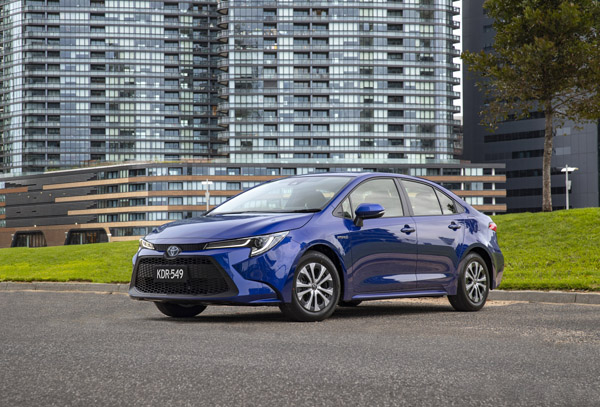 I must admit to having a soft spot for Toyota Corollas. Way back in the early 1970s when I
was young and money was tight, I owned a Corolla for eight years and over 170,000
kilometres. During that time it transported my wife and three new babies (two girls and a
boy) home from the hospitals where they were born. It never missed a beat.

That car was much smaller than today’s Corollas and had only two doors. The car I’m
reviewing here has four doors and is substantially larger than ye-olde 1970 model. It’s also
a hybrid, a term that wasn’t yet part of the automotive parlance in the ’70s.

Toyota is very serious about electrification in cars and the Corolla is a major seller
worldwide. So, the Japanese giant has put a lot of work into making all its vehicles low
polluters particularly on the European market where air quality is dropping and fuel prices
are rising.

STYLING
Corolla sedan is long and while not exactly sleek it’s pleasant to look at. The extra length
over the hatchback somehow gives it an upmarket look, not exactly ‘limo’ but certainly
good looking.

The front is quite low and the slim headlights are connected across the complete car and
run well up into the sides of the bonnet. The lower grille is very large and makes a styling
statement.

The upward sweep of the window line does work visually but may cause problems for
young children trying to see out of them. 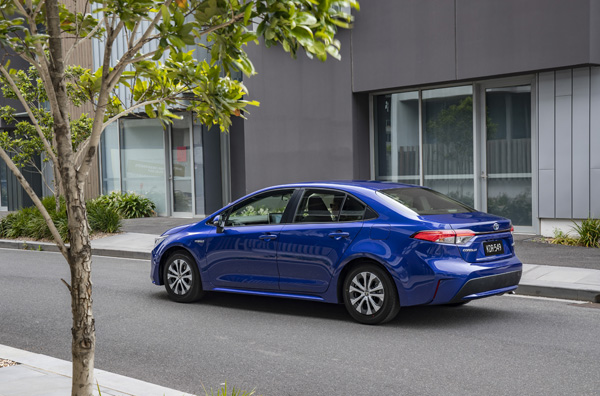 INTERIOR
There’s reasonable width for three adults sitting in the rear seat. But, legroom in the back
seat is limited, which is surprising when you realise this is quite a large sedan in this class.

The driver may have to give up a little space if there’s a lanky passenger behind them.

The Corolla is spacious enough but the materials are rather dark and sometimes it doesn’t
exactly feel like a happy place to be.

INFOTAINMENT
The Corolla sedan has bang up to date technology. Access to all your infotainment can be
made using voice control. It has Apple CarPlay and Android Auto. Toyota says: “Speak to
your dealer about device compatibility.”

ENGINES / TRANSMISSIONS
Corolla Hybrid has a 72kW/142Nm 1.8-litre Atkinson Cycle and a 53kW/163Nm
synchronous permanent magnet electric motor. They drive the front wheels by way of an
e-CVT automatic.

SAFETY
The Corolla hybrid has a five-star ANCAP safety rating based on tests conducted in 2018.
There are IsoFix anchor points on the outboard rear seats, and there are top-tether points
for all three positions. 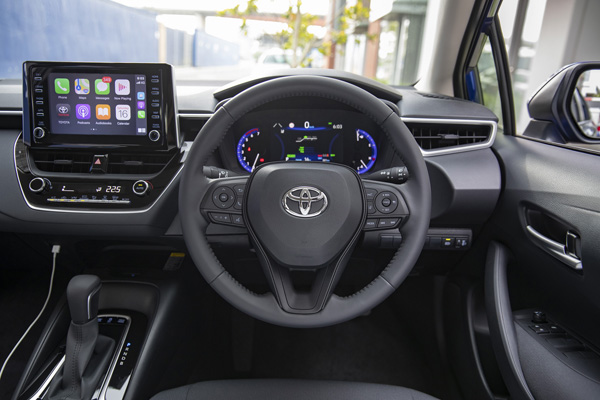 DRIVING
There’s four-way adjustment of the steering wheel. The driver’s seat has eight-way power
adjustment. So, it will be easy for just about anyone to find the right setting for them.

The front seats are comfortable and provide good support in normal driving. There are no
large side bolsters to clamber over as this is a cruiser not a high-performance machine.
So, the front seats are easy to get in and out of.

The back doors don’t open as far as like so it’s harder to get in than you might expect.
There’s good headroom front and rear. We have already tested the rear seat on a
hatchback and it’s a little bit tight for headspace. If you’re going to be carting large
teenagers in the back it would be a good idea for them to go along to the dealer’s as part
of your “what car should I buy?” initial trips.

Toyota has long been a major player Downunder and is well aware of what drivers like in
their car’s handling. The steering responds promptly and gives excellent feedback through
the wheel. Interestingly, Toyota suspension setups are often based on the findings of the
likes and dislikes of Australian buyers.

Fuel consumption was in the mid fours and low five litres per hundred on motorways and
level country roads. Around town it still only rose to high five and low sixes. We really
didn’t fang it on our favourite country roads so can’t comment on what consumption it
would have there.

Tyre noise is low at slow speeds on very smooth surfaces, almost Lexus-like according to
one passenger. However, once the surface was rougher it increased quite a bit. Perhaps
it’s caused by the low rolling resistance of the rubber. Try for yourself if you like a smooth,
quiet car.

SUMMING UP
Toyota Corolla has been one of the world’s best-selling cars for many years, often the best
seller. Having driven the latest model, now offered as a hybrid, it seems inevitable it will
remain at the top of the list for years to come.