AUDI A5 SPORTBACK IS AN EXCELLENT HATCH/COUPE CROSSOVER 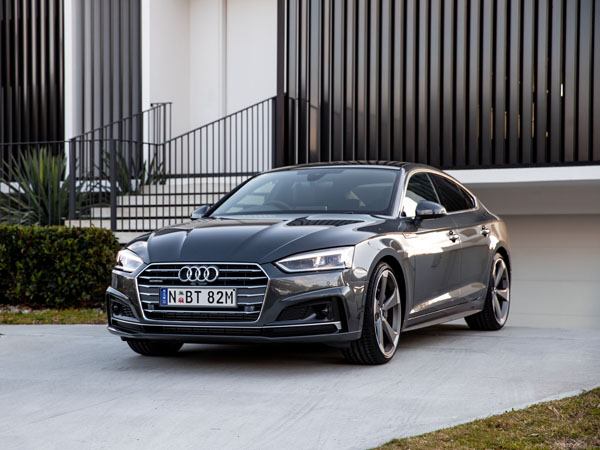 The Audi A5 Sportback is a five-door hatchback but with the long, low and sleek lines of a coupe and the added convenience of rear doors and a large rear hatch.

A5 Sportback has been on sale in Australia since 2012 with the second generation arriving in 2016. The current model came in October 2019 with a price cut of nearly $2000 and, according to Audi, $9000 worth of additional equipment including extra safety equipment, 19-inch alloy wheels, S-Line exterior bling, wireless smartphone charging and heated front seats.

There are two A5 variants, 40 TFSI and 45 TFSI quattro. Each is powered by a 2.0-litre turbo-petrol engine but with different levels of tune and, as the name indicates, all-wheel drive in the 45 TFSI quattro.

The Sportback is 60 mm longer and 15 mm taller than the A5 Coupe from where it takes many of its design cues including its sweeping defined lines, power-bulge bonnet, frameless door windows and a muscular stance.

Its smooth lines are accentuated by almost invisible shut lines where the bonnet meets the front guards. This theme continues along the sides with Audi stylists call ‘tornado lines’ with a gentle downwards, then upwards sweep until they tie in with the taillights. 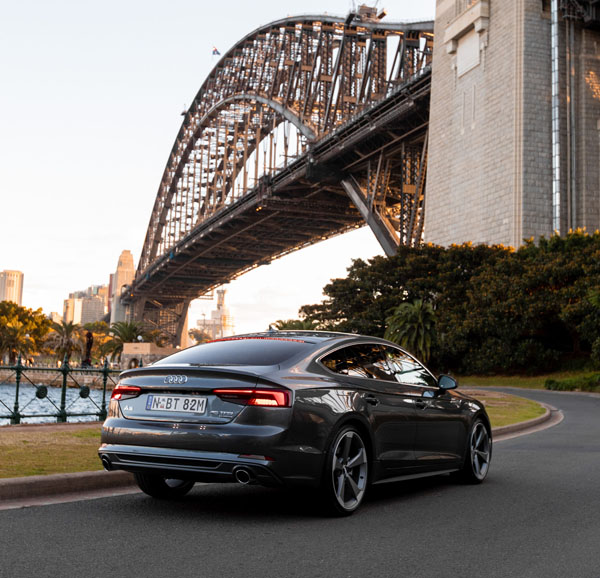 Another external feature is the ‘third’ brake light extending almost the full width of the roof of the car.

Inside, the materials are top quality with the look and feel of luxury and a finish to match.

The dashboard is dominated by two large screens, an 8.3-inch colour touchscreen in the centre/top of the dash that controls the Audi MMI system and the Audi Virtual Cockpit with its 12.3-inch display immediately in front of the driver. The Virtual Cockpit can be customised to provide the driver with their preferences of instruments or readouts.

The MMI system can be controlled by touch, voice, gesture, or through the rotary dial in the centre console. It provides access to navigation plus, Audi connect, LTE data transmission, Bluetooth, wi-fi hotspot as well as Apple CarPlay and Android Auto.

ENGINES
The A5 Sportback is available in two turbo-petrol engine choices both paired with a seven-speed S tronic dual-clutch transmission. The entry-level 2.0 TFSI with drive to the front wheels generates 140kW and 320Nm from 1400 rpm while the 2.0 TFSI quattro is good for 185kW, and 370Nm at 1600 revs. 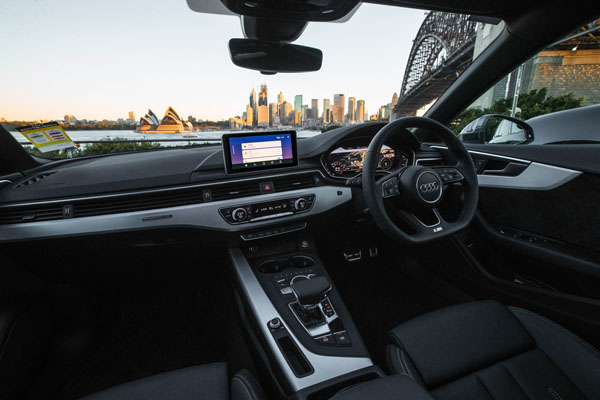 DRIVING
With so many sensible but unexciting SUVs on our list of car reviews we tend to forget how enjoyable driving can be, so it was a real treat to get behind the wheel of this delightful sports sedan.

Getting in an out can be a little awkward for the less flexible of us. Once seated I had to set the driver’s seat at its lowest level to avoid scraping the roof. But it is effectively a five-door coupe so this has to be expected and all was forgiven once we escaped from the urban jungle.

In-cabin storage isn’t great with narrow door pockets, small glove box, shallow centre console bin and no sunglass holder. There are two cup holders in the front and two at the back.

Although it’s a five-seater it’s better suited to two adults in the rear for trips of any length. There is good head and knee room, but there’s limited foot space under the front seats

At 480 litres the boot is excellent for a car of this shape.

There’s no head-up display option although the size and positioning of the Virtual Cockpit does allow access to information with only a minimal amount of distraction from the road ahead.

Around town the A5 Sportback is nimble through tight roundabouts and narrow streets. With the help of the latest technology it’s easy to park.

The ride is composed and handling is impressive, with grip levels well over those likely to be attempted by most drivers. Road bumps and dips were absorbed nicely and the cars were never knocked off line.

Steering feel is relatively light but accurate. There’s less feedback than we’d like but this is a personal taste. If you haven’t driven an Audi before you can judge on your own during a pre-purchase road test.

The latest A5 Sportback 45 TFSI is 85 kg lighter than its predecessor which not only helps with its agility but also improves fuel efficiency. Having said that we averaged around 8.7 L/100 km during our test week well above the published 6.5 L/100km. Clearly we were having too much fun.

SUMMING UP
This A5 Sportback, with its stylish looks, easy performance and improved practicality is an impressive hatchback/coupe crossover. The rear doors and reasonably large interior mean that it can be used for family transport although the attraction of its performance credentials will always be its main attraction to the keen driver.

Audi has resisted the upward trend in warranty period and remains with a three-year coverage, albeit with unlimited distance.