Porsche Panamera Sport Turismo adds another dimension to the prestige German marque’s range. A body that’s part way between that of a station wagon and a five-door coupe.

It attracted plenty of attention from those who know Porsches during our week’s road test, though some initially failed to recognise that it was a wagon, which may be exactly what the designers were aiming at.

Our test car was the big gun – the Panamera Sport Turismo Turbo, which is simply sensational.

STYLING
The new generation Panamera coupe has been on our roads for a bit over a year. It has gained praise for holding onto the original styling theme but taking out that the slightly bulbous roofline of the original. The wagon takes the rear end one step further and to our eyes is the best looker yet.

POWERTRAINS
The big 4.0-litre V8 has its twin turbochargers sitting inside the cylinder banks, which minimises turbo lag. It produces up to 404 kilowatts of power and 770 Newton metres of torque, the latter from just 1960 rpm, to 4500 revs. It has a zero to 100 km/h time of just 3.8 seconds when Launch mode is selected in the Sports Chrono package.

There’s a big variety of other engines on offer under the flowing bonnet of the latest Panamera: a 3.0-litre V6 turbo-petrol that can be specified with rear-wheel or all-wheel drive. All other models are AWD only. A 4.0-litre turbo-diesel has 850 Nm from just 1000 rpm. And a petrol-electric hybrid. 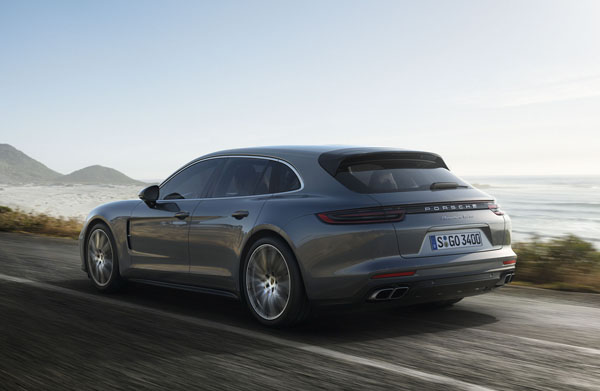 SAFETY
Active safety, that is the ability to avoid a crash, is exceptionally good thanks to outstanding handling, braking and overall performance. Passive safety, minimising injury during the crash, is also to a very high standard.

ANCAP and Euro ANCAP seldom test sportscars so there is no star rating for the Panamera.

DRIVING
Performance from the big twin-turbo V8 engine is simply sensational. There’s the stunning sound of a V8 engine being worked hard that’s sure to bring a smile to your face. Virtually no turbo lag and seemingly endless torque.

The PDK automatic transmission liaises beautifully with the engine and almost instantly senses the driver’s intentions in the way of acceleration.

There’s a huge amount of road grip in these low-slung German sports wagons and going around bends on dry roads at double the suggested speeds didn’t cause the slightest trouble.

Four-wheel steering gives good feel although it’s not quite as sharp as the pure Cayman, Boxster and 911 models. Which is a sensible bit of design as Panamera is a grand tourer rather than weekend track days. 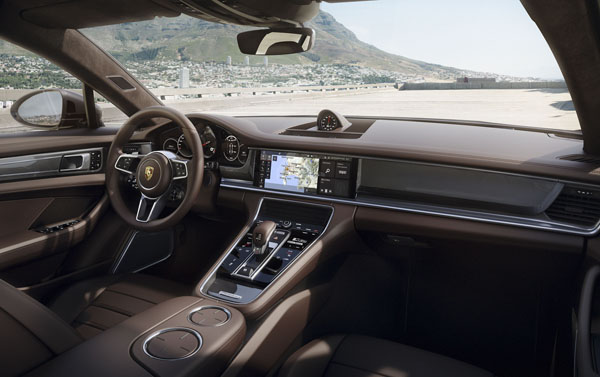 The large tyres and sportier suspension setup on the Panamera Turbo did create a fair bit of a coarse-chip racket at times. Nothing like as bad as in the latest Porsche 911s, though.

The front seats are large and spacious and have plenty of support in the interests of locating those in the front seat during hard cornering.

With the driver’s seat in position for my 182cm frame there isn’t comfortable legroom to sit behind myself in the back for long distances. Headroom is fine, though.

The outer back seats are virtually individual units and also offer good support. There’s centre seat to make Panamera a five-seater but it’s really only suited to short term use.

Luggage space is 520 litres, which is not a lot up from the 495 litres of the coupe due to the wagon’s sleek tail. The rear backrests fold down for added cargo carting.

SUMMING UP
New Porsche Panamera Sport Turismo Turbo is a stunning example of the latest in German sportswagon design. It looks great, goes like a rocket and while not exactly cheap it does provide good value in this stratospheric automotive arena.