Lexus has introduced an upmarket version of its large LX 570 SUV. Tagged the 570 S it has a sports mesh pattern for the spindle grille, styled front and rear bumper, side skirts and rides on gloss black 21-inch forged alloy wheels. The LX 570 S is offered with two exterior colours; Sonic Quartz and Starlight Black.

Courtesy lamps in the exterior mirrors project “LX S” branding on the ground.

Inside, there’s trim in semi-aniline perforated leather that’s offered in Black or, exclusively for the ’S’, a rich burgundy colour named Garnet. Shimamoku Grey ornamentation is also unique to the LX 570 S.

Comfort has long been a big feature of this Toyota LandCruiser based SUV and is further improved with a heated steering wheel, and ventilation and heating for the front and outboard second-row seats.

Lexus tells us alloy pedals, “add to the sporty design aesthetic.” Not sure we see the large Lexus as being a sporting model, though…

However, on the suspension front the big wagon has front and rear performance dampers to improve body rigidity and steering stability. We’ve yet to drive one but will do so and make our comment on this.

Infotainment in the Lexus LX 570 S operates though a 12.3-inch high-definition screen. 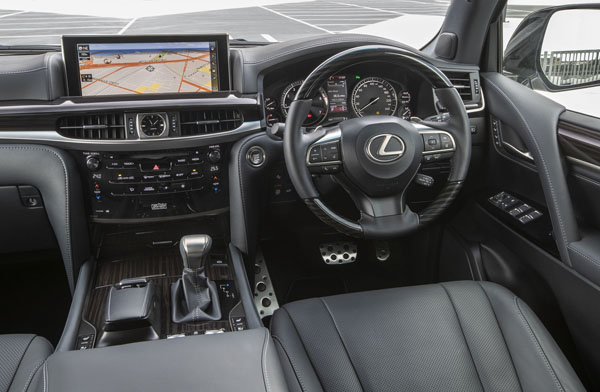 Power comes from a 5.7-litre V8 engine with 270kW/530Nm driving all four wheels through an eight-speed automatic transmission.

The big Lexus is capable of towing up to 3500kg (braked).