Upmarket German Audi was criticised by some when it chose to add a small, relatively low-cost model to its range in 1996. Critics said the new Audi A3 would devalue the prestige image. They were proven wrong because Audi used quality materials, comfort and high levels of driving ability to its small car.

In the intervening years Audi has introduced an even smaller model, the A1, and fellow German makers BMW and Mercedes have successfully introduced similar sized cars.

First generation Audi A3s are getting on in years so in this week’s used-car review we will begin with the second generation A3 from June 2004. In May 2013 the gen-three arrived downunder.

Audi stylists have stuck with the original successful shape over the years. Differences are obvious when the three generations are viewed side by side but the timeless lines make for good resale value.

In Europe the Audi A3 is often used as a family car, but in Australia it’s more likely to be bought by singles or couples.

Audi A3 is sold in three- and five-door hatchback bodies, with the five-door being almost station wagon in its rear end, so is a good load carrier. A four-door sedan was added to the lineup in 2014 but hasn’t set the sales graphs on fire.

An Audi A3 two-door cabriolet joined the range in November 2007 and was an immediate success. It can carry four adults if they don’t mind doing some serious compromising on legroom.

Four adults can get comfortable in an A3, but two plus two children is a more practical load. Rear-seat access is in the three-door because the front seat design sees it move well out out of the way. Naturally, the five-door – Sportback in Audi-speak – is the biggest seller.

Handling is very good, though there is perhaps just a little too much understeer at the limit to suit the full-on driving enthusiast.

Engine choices are many and varied. Most engines are four cylinder units but Audi’s fascinating five-cylinder turbo-diesel, sold from 2008 till 2010, is an interesting exception. A big capacity 3.2-litre V6 petrol quattro was first imported in 2004 and ran through till 2010. It has a huge amount of get-up-and-go in a relatively light car. 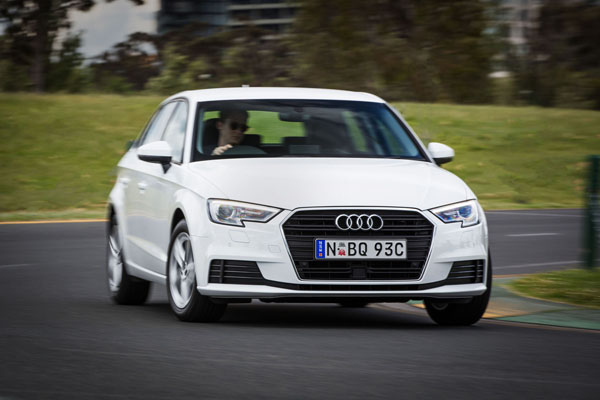 A rather odd super-economy model tagged as Audi A3 Ultra officially uses only 3.2 litres of diesel per hundred kilometres but isn’t a lot of fun to drive.

Power in most standard Audi A3 models is transmitted to the front wheels, the high performance models have the company’s quattro all-wheel-drive system. Quattro is also offered in some other models.

Audi S3 is a performance variant and Audi RS3 is a full-on hot-hatch with everything that means in the way of scintillating performance for those who know how to drive.

Check your insurance company about their attitude to the Audi S3 and RS3 variants. Some charge premiums that can add significantly to the purchase price of an older used car.

WHAT TO LOOK FOR
Uneven tyre wear, particularly at the front, probably means an A3 has been driven hard. This is more likely in one of the high-performance S and RS models, but check even the basic cars as A3s seem to attract press-on drivers.

Tyre wear may also mean one of the wheels is out of alignment after a crash, but a hard thump against a kerb can cause the same problem. If in doubt, get a professional opinion.

Make sure the engine starts quickly and idles smoothly even when it’s still cold.

If the engine hesitates under hard acceleration in older A3s there may be computer problems.

During your test drive check that an automatic transmission doesn’t hunt up and down the gears when climbing moderate hills with light to medium throttle openings.

Body repairs are most easily spotted by sighting along panels in a strong light to see if there are ripples in the metal. If there’s any doubt have a professional do a full inspection, preferably while the Audi’s up on a hoist.

Look over the interior and luggage area for signs of damage.

CAR BUYING TIP
Make sure you take a used car for a decent test drive. A quick trip around the block is a mug’s game and is often all that’s suggested by sales folks.