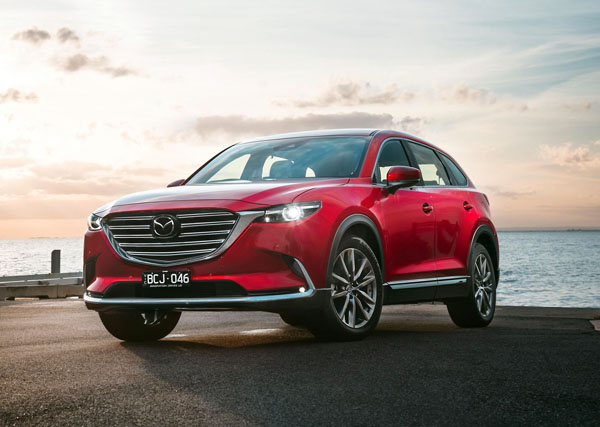 Mazda CX-9 is a large, handsome SUV that’s been popular in Australia since it was released in Australia in 2016. To keep it fresh in this highly competitive market segment it was updated in 2018 and recently had a solid makeover for 2020.

We spent four weeks in one to see how it feels now. Unfortunately our test period coincided with the early days of serious restrictions on movement due to Covid-19. We didn’t do any off-road work, but to be somewhat cynical, very few owners do. Mazda Australia is well aware of this so sells the CX-9 with two-wheel-drive as well as 4WD. Our test vehicle did have all-wheel-drive.

Nevertheless the 400 km plus on-road driving we did do reminded us why we like it so much.

The largest Mazda SUV is offered in Sport, Touring, GT and Azami variants. The previous range also had an even more upmarket model in the Azami LE. However the LE was discontinued for the 2020 season. To make up for that the Azami has been receive a higher-quality feel to its Nappa leather seating. The trim is offered in Walnut Brown and Pure White.

Our test vehicle was the new Azami with the white seats, maybe not ideal if you’re transporting kids, but as a couple we did like the trim – and it’s pretty easy to clean if the little darlings have been grubby.

Exterior changes include a dark 20-inch wheel finish and a new bright 18-inch ones. 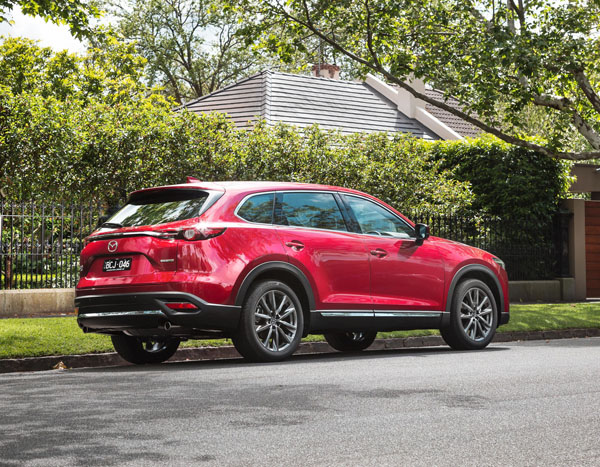 INTERIOR
The big SUV is just over five metres in length so even third row legroom is almost okay for adult passengers, though if they’re taller than average headroom they may have a problem. The window-line is quite high and could restrict outward vision for young children. Get the littlies to check it out while they are helping you on the test drive.

Third row access has been made safer and easier as there’s now a switch on the side of the seat cushion that tilts the seat forward. It’s now in a position where third row passenger can easily reach it.

A hands-free tailgate using a simple kick gesture will make life simpler if you have a load in your hands.

Cargo capacity is better than many in its seven-seat class, with a reasonable 230 litres with all seven seats in use and 810 litres as a five-seater. The loading height of the floor is a comfortable 805 mm.

POWERTRAIN
Power comes from a four-cylinder 2.5-litre turbo-petrol engine that peaks at 170kW. Torque is 420Nm from 2000rpm.

The engine is mated to Mazda’s SkyActiv-Drive six-speed automatic transmission. 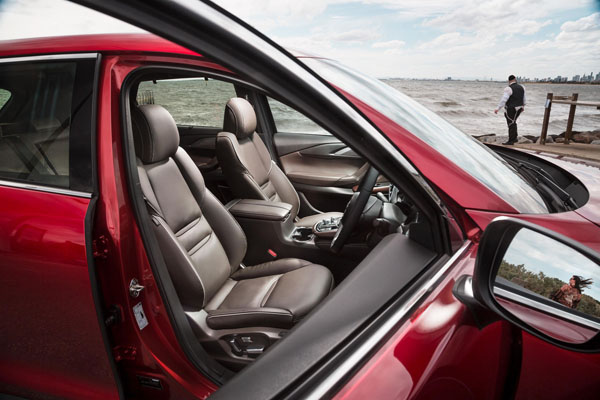 SAFETY
Mazda has never been a company to scrimp on safety features and all CX-9 variants come with a wide range of driver support systems, including Mazda’s i-Activsense that uses radars and cameras to recognise potential hazards. There is pre-crash safety technology to prevent or reduce the severity of impacts.

The automatic braking system can detect pedestrians in the dark.

It almost goes without saying these days, but we should reiterate that the big Mazda cruiser has a five star ANCAP rating.

INFOTAINMENT
Mazda CX-9’s infotainment screen has been enlarged to nine inches. It’s one of the best on the market, perhaps the best of all for its ease of use. But drivers should avoid taking their eyes off the road

The CX-9 uses Mazda MZD Connect system to provide access to the internet, social media, email, Pandora, Stitcher and Aha as well as hands-free voice and text messaging through Bluetooth.

All models get built-in satellite navigation while the GT and Azami have a Premium Bose 294-Watt audio system.

There are USB ports in the front centre console and two in the rear seat armrest. The addition of extra USB ports in this 2020 update further improves third-row functionality.

DRIVING
The CX-9 now has G-Vectoring Control Plus (GVC Plus). This uses brake control to help stabilise and return the vehicle to straight-line running when coming out of a turn. The all-wheel-drive system has Mazda’s Off-Road Traction Assist, which makes driving easier on undulating roads, preventing tyre slip.

All models now have the convenience of Auto-hold in the Electric Parking Brake, which holds the vehicle stopped, even if you’ve taken your foot off the brake.

This Mazda has good low-down torque that makes it pleasant to drive on a day-to-day basis though it’s obviously no sports machine. Its 12-metre turning circle can make parking a hassle in tight spaces, particularly underground carparks. However its parking sensors, reversing camera and the rear cross traffic alert does simplify things.

Out of town it’s like a luxury cruising sedan. Extra sound deadening material was added in 2018 and again in the 2020 model meaning the cabin is lovely and quiet.

The powered driver’s seat has a tilt function, adjusting the height of the cushion’s front edge to make it easier to get comfortable.

Fuel consumption is a pleasingly low at about seven to nine litres per 100 kilometres on country roads and motorways. But around town the size of the machine means you’re likely to use 12 to 15 litres per hundred.

SUMMING UP
Mazda is a major player in the SUV field, having CX-3, -5, -8 and -9 models. The CX-30 sort of fits in there as well. The big brother of them all, the CX-9, is an excellent long distance cruiser and almost falls into the luxury saloon class. Definitely one that should be on your short list.