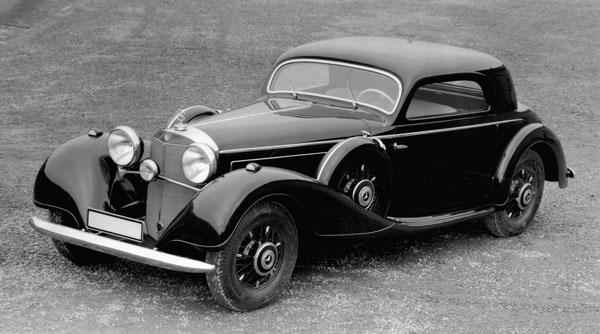 The Mercedes 540K was introduced in 1936 as a derivative of the 500K which was one of the first 160km/h cars capable of taking full advantage of the new autobahns which were being introduced to Germany.

This car with its supercharger had an engine rated at 135kW. When its design was first being considered a de Dion rear suspension was contemplated but due to lack of time the swing-axle layout used on previous Mercedes was retained. The most attractive form of the 540K was the Roadster. It had a well-appointed cockpit and was obviously built as a fast touring car rather than as a poorly disguised competition car. In fact despite its top speed it did rather poorly when any owners entered it in competitions.

The 540K actually had its gestation back as far as 1931 when the type 170 was introduced. This 1692cc six-cylinder car was the first Mercedes to use what then was a newly developed independent suspension system. This system featured parallel transverse leaf springs at the front and swing axles at the rear. The 540K was powered by a 5.4-litre engine with massive chromed external exhaust pipes. It was an exclusive car built for well-to-do German society, and was regarded as the country’s premier car.

Production of the 540Ks was never large, being in the sub hundreds rather than the thousands. In 1936 just ninety seven 540Ks were produced, in 1937 one hundred and forty five were built and in 1938 and 1939 ninety five and sixty nine respectively were built before the commencement of WW II brought production to a close.

In 1938 The Autocar magazine tested a 540K and it recorded the highest maximum speed for any car they had previously tested at 167.44 km/h with three people aboard on the track at the Brooklands raceway. The 540K had a four-speed gearbox with a 1:1 top gear. On the earlier 500K top gear had an overdrive ratio.

Some changes were made to the 540K during its lifetime. In 1938 the appearance was slightly revised and the pressed channel chassis was changed to an oval-section tube construction. Also the engine valves were upgraded to improve its top speed efficiency. In 1939 a five-speed gearbox was introduced with an overdrive top gear being adopted.