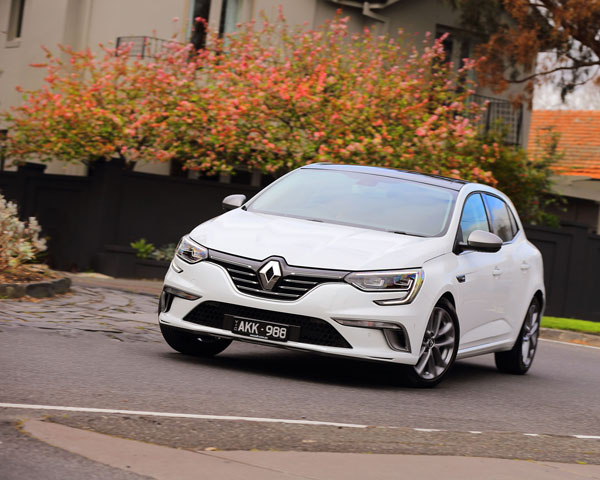 Renault’s all-new Megane five-door hatchback range is very well priced, starting at just $22,490 for the Megane Life with a manual gearbox. Megane is aimed at buyers considering Asian cars but who would like a healthy dose of French flair. This will be a major selling point of fourth generation Megane.

Our test car was a Megane GT-Line with a tag of $32,490, plus on-road costs. It has plenty of sporting flair in its shape but doesn’t have the added power of the $38,490 Megane GT.

STYLING
The fourth generation Renault Megane is longer and lower than the superseded one. Large headlights sit outside a large Renault ‘diamond’ badge. There’s deep sculpting of the doors, and a distinctive shape to the C-pillars that we really like.

From the rear it looks particularly low and purposeful, thanks to a wider wheel track and slim taillights.

Seventeen-inch alloys are standard on the GT-Line, our test car had the 18-inch optional units, the same diameter as on the full-on Megane GT. 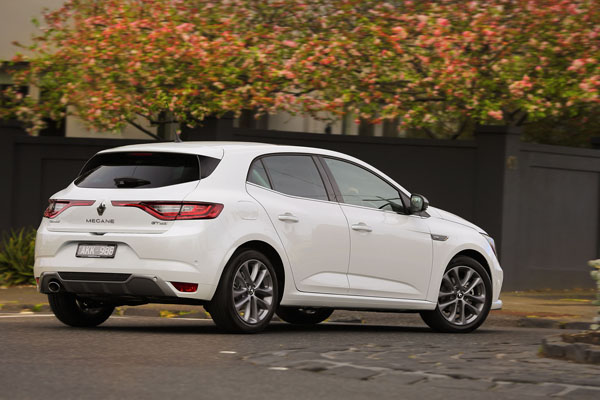 ENGINES / TRANSMISSIONS
Power comes from turbo-petrol engines in all Meganes. The GT-Line has a 1.2-litre TCe 130 horsepower engine with 97 kW and 205 Nm. This engine is used in all but the GT, which has a 1.6-litre TCe 205 horsepower unit with outputs of 151 kW and 280 Nm.

A portrait oriented 8.7 inch touchscreen is part of an options package. This shaped screen makes a lot of sense when using satellite navigation as it gives you a much longer view ahead. We love it and would prefer to see it standard on all models. Then again that would hinder the sales guys and gals trying to move buyers up a model or two in price.

SAFETY
Renault was the first ever car company to get a five-star safety rating and the French giant has taken safety even more seriously since that historic event. New Megane sailed through to ANCAP five stars with ease.

A blind sport warning system is fitted to the GT-Line and GT – though we would like to think that owners of these sports models would know how to adjust the mirrors correctly and so not need an electronic warning. 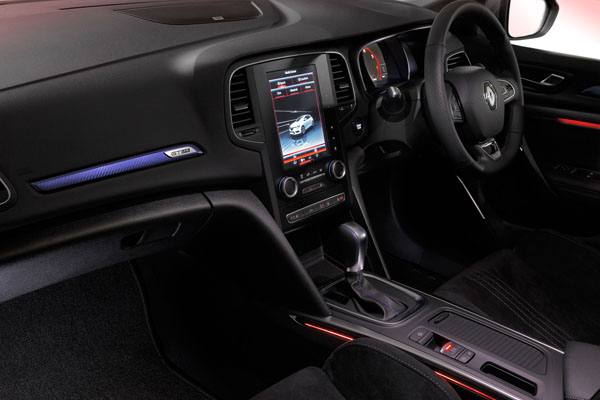 DRIVING
The front seats are reasonably easy to get into although the side bolsters are relatively high. Rear seat legroom is good and two six-footers can fit one behind the other without any real need for compromise.

Renault has been working on turbo-petrol engines for many years and really has this one nicely sorted. There’s more turbo lag than we like, but that’s probably unavoidable with present day technology.

The engine has reasonable performance in its Normal setting. Clicking up to Sport not only adds more grunt, but also gives it a nice sporting exhaust note, and even automatically blips the throttle on downchanges. Great fun.

There’s an Eco mode, but the engine feels pretty flat and doesn’t reduce fuel consumption all that much.

Spending most of our time in Sport we typically used six to seven litres per hundred kilometres on motorways and country roads. Given a blast on our favourite twisty, hilly bits it rose to 10 to 12 litres per hundred, but that’s more than acceptable.

Suspension and steering really are brilliant in the typical French manner. The ride is pleasantly supple most of the time, though some big bumps and dips on backroads did affect it at times.

Despite that impressive comfort the Megane in GT-Line has plenty of road grip, turns in readily and is happy to change its line partway through bends.

The translucent sliding cover under the sunroof isn’t up to Queensland summer sun and lets in too much heat and light for our tastes. Of course in Europe with its soft overcast it works well, so it may not be possible for the Australian product planner to specify any other cover.

SUMMING UP
Renault Megane GT-LnIe is a stylish hatch that thoroughly enjoyable to drive. The combination of French driving flair and comfort is just right and works well on all roads.

Megane has a five year, unlimited distance warranty and five-year roadside assistance. Capped price servicing for each of the first three scheduled services is priced at just $299.