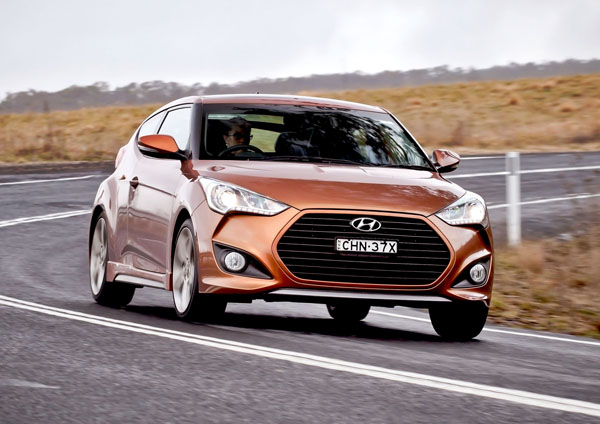 Hyundai Veloster is something right out of the ordinary: a coupe on the driver’s side and a hatchback on the other side. Not only does that make it an instant talking point and grab plenty of sales, but also makes it more usable.

The bane of two-door coupes is getting passengers in and out of the rear seats. Veloster overcomes this by having a small back door on the left side. It’s forward hinged and makes access to the back easy.

The diving roof line and expansive hatch give it sporting lines. It’s different inside as well. The dashboard is all curves and interesting details, but it’s user-friendly and you soon come to grips with the controls.

The front seats are supportive and comfortable. There’s decent legroom in the back seat but the headroom is marginal. Some will find the rear seats claustrophobic thanks to the sporty roof line and high side windows. Another drawback is that the heads of those in the rear can get cooked in the sun.

If you keep in mind it’s a coupe these sort of things don’t matter overmuch. But if you’re planning to use one as a small-family car make sure to have everyone along for your personal test drive.

The view out of the rear is impeded by the shape of the hatch so the rearview mirror doesn’t let you see a lot. Make sure you set the door mirrors correctly or there could be a dangerous blind spot.

The rear seats have a 60/40 split and fold to create a good size luggage area of 440 litres.

When launched in February 2012 Hyundai Veloster came with a 1.6-litre petrol direct injection with power of 103 kW and 166 Nm of torque. It had one of two transmissions, a six-speed manual and a six-speed dual-clutch auto. Performance is adequate rather than exciting, exacerbated by the fact that top torque wasn’t reached till almost 5000 rpm.

A turbocharged engine with 150 kW and 265 Nm arrived in mid 2012. Top torque is reached at only 1750 rpm – then continues at its peak until the engine reaches 4500 revs. There’s some turbo lag, but we’ve felt worse. Again it has six-speed manual or automatic transmission.

Hyundai Veloster Series II arrived in May 2015 so is still relatively rare on the used-car market. It had a facelift, new wheel designs and minor interior revisions. The Turbo got uprated to a seven-speed dual-clutch auto with paddle shifters, the manual remained as a six-speeder as did the autos in the rest of the range.

Hyundai is a major player in Australia these days, frequently finishing in second or third place in the sales race. That’s because the South Korean giant is building quality cars with interesting styling and, even more importantly is continually working at customer satisfaction.

Servicing and minor repairs can be done by home handy-people with experience and the underbonnet isn’t too cramped. Always leave important items to the professionals.

Insurance costs are about average for this class, but if you’re a young and/or inexperienced driver you may have to pay a fair bit for Turbo models. Shop around, but make sure you do accurate comparisons.

WHAT TO LOOK FOR
This sort of car can fall into the hands of drivers who like to thrash them around – perhaps crash them as well.

Uneven wear on the front tyres is a clue to hard driving. Run your hands across them, if the resistance is different in one direction you’re probably looking at a Veloster that’s been worked hard.

Crash repairs can be spotted by checking for wrinkles in the panels when viewed side on, ideally in strong light. Also look for paint spots on unpainted areas such as glass and badges.

The engine should start easily and idle smoothly from the beginning.

Some lag on initial acceleration on Turbo models is normal, if it’s too bad have the car checked out. Naturally aspirated engines are better than turbo ones, but there may be some throttle lag.

Gearchanges in manuals should be smooth and silent. A ‘box that’s been worked hard may be reluctant to change down from third to second. Again, have a professional test it.

Interior condition in these relatively new Hyundais should be almost as-new. Don’t forget to check the boot as well as all seats.

CAR BUYING TIP
Having bought a cheap new car some people seem reluctant to spend any money on its upkeep. Ask to see the service books.