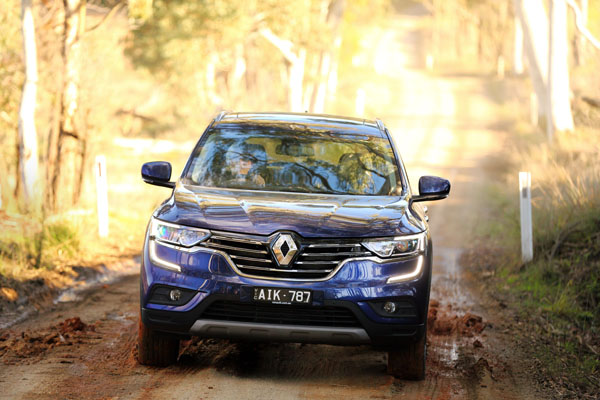 Unlike many of its rivals that have up to five different SUVs in their range Renault has settled on just two models, the compact Captur and, the subject of this test, the mid-sized Koleos.

A relatively late arrival on the SUV market Koleos went on sale in Australia in 2008. After facelifts in 2011 and 2013 the current, second-generation, model was released here in 2016.

Built at the Renault Samsung Motors plant in Busan, South Korea it shares the same platform, engine and transmission as the Nissan X-Trail.

STYLING
Koleos is a big, bold vehicle. The front features an almost vertical grille with chromed strips that run from the headlights along the full length of the guards and all the way back to the ‘gills’ in the front guards. The centre of the grille features a large Renault diamond with another diamond at the rear between horizontal taillights. 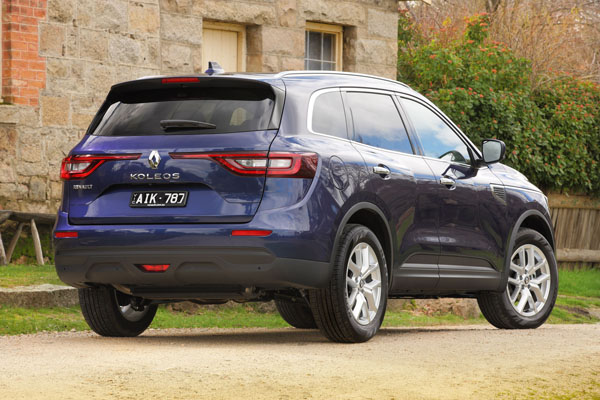 INTERIOR
Unlike its Nissan sibling Koleos only comes with five seats. Getting in and out is comfortable without too much bending or head scraping. There’s enough rear space in all directions for three adults to travel in comfort. With two rear passengers the central armrest can be folded to reveal twin o inbuilt drink containers.

There’s good volume of storage space with 458 litres when the rear seatbacks are in place, extending to 1690 litres when they are folded. There’s a full-size spare below the boot floor.

All models get a one-touch folding mechanism for the rear seatbacks. Intens has an automatic bootlid opening via the key fob and and can be closed either the same way or with a button on the bottom of the lid. The opening height can be reduced if needed.

ENGINES / TRANSMISSIONS
Koleos comes with the choice of petrol of diesel engines. The petrol is a 2.5-litre naturally-aspirated four-cylinder unit with peaks of 126 kW and 226 Nm at 4400 rpm. The diesel, only available in the top-spec Intens, has a capacity of 2.0 litres with 130 kW of power and 380 Nm of torque from 2000 rpm.

Oddly, although the diesel has significantly more torque than the petrol its towing capacity is 1600 kg compared with the 2000 kg behind the petrol unit. A Renault spokesman explained that this was due to the petrol engine being specially retuned to provide extra capacity to meet European demands.

Koleos also comes with the choice of front or all-wheel drive. The AWD has three drive options: 2WD, Auto and Lock controlled by a switch on the centre console.

INFOTAINMENT
Koleos gets Renault’s latest R-Link 2 system for its infotainment technology. The premium Intens model displays onto an 8.7-inch tablet-style touchscreen with the Life and Zen getting a 7.0-inch portrait screen.

Intens has two rear-seat USB ports in addition to the single one in the front console.

Life and Zen have an eight-speaker Arkamys sound system, upgraded to a 12-speaker Bose system with subwoofer and digital amplifier in the Intens.

DRIVING
As mentioned entry and exit is easy and the driver’s seat is wide, supportive and comfortable. The steering wheel is both tilt and reach adjustable.

These minor annoyances aside it’s a capable enough vehicle with good, but unexciting, performance from its 126 kW / 226 Nm engine, the latter not reaching its peak until a fairly high 4400 rpm. We found it needed a bit of coaxing to climb steepish hills and when overtaking. Fortunately there is a pre-set manual to assist the CVT.

Suspension is a little harsh and relatively firm without making the ride uncomfortable. Steering is light and direct.

The motorway is the natural habitat of the new breed of largish SUVs and Koleos showed that it could cruise comfortable despite its fairly modest engine capacity and outputs. Peak torque at 4400 rpm is relatively high in a class which is increasingly using turbo power. However, our test runs showed good pulling power from about 2000 revs with the added benefit of having no turbo lag. Even when pushed the cabin remained well insulated from outside noise.

Off-road Koleos had no trouble traversing some corrugated dirt backroads with help from the 210 mm ground clearance. It would be best to avoid anything too serious because the approach and departure angles are fairly shallow but most if its rivals are in the same situation.

SUMMING UP
Renault Koleos is attractively-styled medium-large SUV that performs and drives well, with commendable economy, plenty of interior space and good safety levels. Because of its European design it has a good blend of subtle style, genuine off-road ability with great load-carrying versatility.

It certainly doesn’t deserve to trail its market-leading competitors to the extent that it does and so is well worth a comparison test drive.

The close alignment between the Koleos and the big-selling Nissan X-Trail is a big plus for the French car because it should reassure potential buyers who may have any reliability and quality concerns. Despite pricing of the two models being similar, X-Trail outsells Koleos by a ratio of around seven to one.