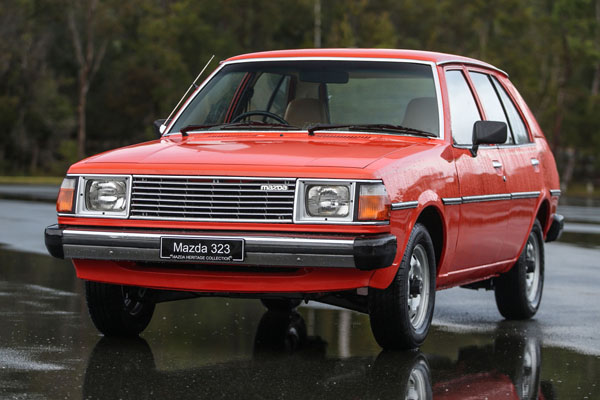 Mazda Australia is proud of the fact that its Mazda3 is chosen by more Australians than any other car. Pointing out that while Toyota Corolla sometimes outsells the Mazda3 overall, many Corollas are bought by company fleets. But when buyers make their own choices more go for the Mazda3. Splitting hairs? Perhaps, but it is certainly a valid point that given a choice, the ‘3 is number 1.

Mazda3 began its life as Mazda 323 just on 40 years ago and to celebrate its 40th anniversary Mazda invited a select group of journalists to drive examples of 323 and ‘3.

This fascinating event was held at the Mt Cotton Training Centre outside Brisbane to allow us to drive in controlled conditions. Sadly it rained for most of the day. Wet weather during Mazda events in Queensland is becoming an unwanted tradition, much to the embarrassment of we journalists living in the (allegedly) Sunshine State.

The event began with a fascinating talk by David Chalke from AustraliaSCAN highlighting the many social changes we have seen since 1977. Oil shocks and soaring petrol prices, road fatalities much higher than today, the aftermath of the Vietnam War, cigarette ads on the back cover of just about every magazine, the 2000 Sydney Olympics, sky-high airfares – and much more.

David’s talk brought back many personal memories; including being called up for Vietnam – but thankfully failing the medical – and sitting in the crowd of 110,000 hyped-up people experiencing the opening ceremony of the Olympics. 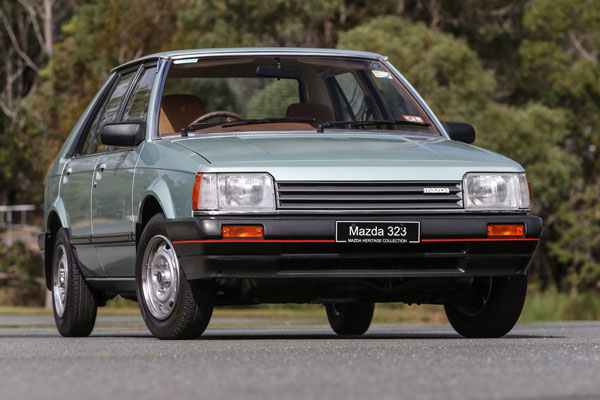 Then it was onto the Mt Cotton roads, first driving a rear-wheel-drive Mazda 323 dating back to 1977. The little Mazda was quieter and smoother than anticipated, though certainly not to the impressive standards of today’s cars. The four-speed manual gearbox meant the engine was pretty busy at 100 km/h but certainly didn’t feel in any way stressed. Much lighter than current small cars the 323 provided real driving enjoyment and a willingness to respond to steering and throttle. ‘Very enjoyable’ was the first note I scribbled on getting out with a smile on my face.

Next was the Mazda 323 that shared many parts with the Ford Laser including styling. This pair created a real stir on the Australian market, as quite a few buyers were beginning to move away from large family sixes. This 323 had front-wheel drive – one of the major automotive changes during the ‘70s was the switch to this space-saving feature. 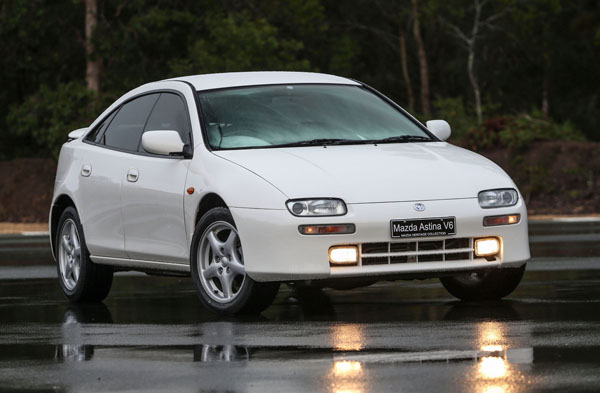 Who would have thought of a six-cylinder small car? Mazda did (1991)

The Mazda 323 was still light and pleasant to drive and felt a little more solid than the previous car. The view out was excellent thanks to the slim pillars and large windows.

My next drive was the Mazda 323 that I reckon the prettiest car of the day – the Astina with concealed headlights of the type normally only seen in full-on sports cars. Which may explain why the car had a lovely lively feel to match its style.

Did you know that a V6 engine was once optional in the Mazda 323? Not may people do as it wasn’t a success, partly due to being very expensive, but more likely because it didn’t have all that much performance. With a capacity of just 2.0 litres the V6 was tuned for European driving, so the power and torque were way up the rev range and not suited to low Australian speed limits.

Reliving the V6 was interesting because it’s a part of history that’s unlikely to be repeated. Even big name prestige cars these days are mostly powered by four-cylinder units, with sixes and eights becoming ever rarer.

Much nicer, was the next Mazda 323 SP20 . Not really a hot-hatch by today’s standards, though it had a bit more poke than the standard models and the suspension only had minor tweaks. Light, Agile, Good fun.

The first Mazda3 wasn’t the most stylish. Bigger and better things were to follow (2005)

Now came the first Mazda3. The change of name was an attempt to tag into the BMW model naming system, with the Mazda3 being in the same size class as the BMW 3 Series. Somewhat plain in its shape because Mazda was staring at financial troubles at the time so didn’t want to take any risks.

On the road it felt more modern than the last of the 323s. A little quieter, a fair bit heavier as crash safety regulations were starting to become pretty serious. It was competent enough, but far from interesting to drive.

The second generation Mazda3 jumped a major step forward. Good in many ways, but not so interesting in others. Smooth, refined and comfortable were the plus points I scribbled. But it had put on a lot of weight and didn’t offer a lot of driving enjoyment. Rather it was a sophisticated small family carrier, not a small fun car like its honourable ancestors.

The thick A-Pillars, which provide strength in a crash, made it hard to see out on tight corners. As this is a feature of virtually all late model cars drivers have become accustomed to having to move their head around on twisting roads. Occasionally not seeing other vehicles coming out of cross streets and running into them as a result…

Finally the current Mazda3 that I drove to and from Mt Cotton from my home on the Gold Coast before taking it onto the testing roads. Its Kodo styling works exceptionally, it’s smooth, quiet, comfortable and crammed full of active and passive safety features.

DECISION TIME
For around town trips and weekend drives to near-country areas I would choose to drive a lovely old restored Mazda 323 rear-driver. For longer trips – and to have a crash in – the latest Mazda3 would be my vehicle of choice.