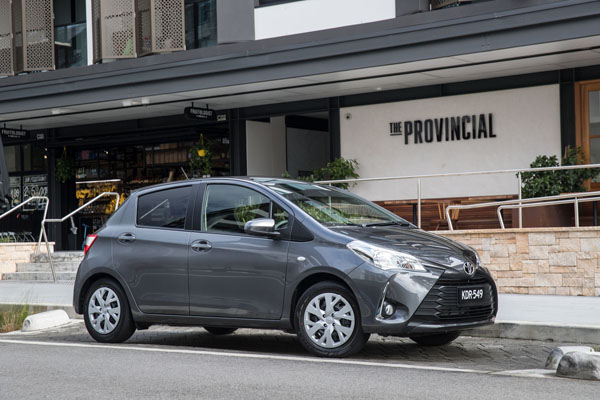 Safety and style: it appears Toyota is covering all bases with its revised light passenger vehicle, the Yaris hatchback. It has class-leading safety systems available across the range and is clothed in an interesting shape from the Toyota ED2 design studio in the south of France.

The result is premium safety that’s standard on the top-of-the-range Yaris ZR we drove, and a $650 option on the Ascent and mid-range SX variants.

Despite styling improvements, the starting price stays at $15,290, plus on road costs, for the Ascent and an unchanged $17,330 for the SX, with the option of automatic transmission remaining at $1530. The new auto-only ZR price of $22,470 reflects the addition of the safety equipment.

STYLING
The French connection placed a greater emphasis on horizontal lines to express a wide, more planted stance and low centre of gravity. This was done with a new front bumper mimicking a catamaran with broad sections flowing down from new headlights, flanking the wide, trapezoidal grille.

The new grille contributes to the Yaris’s more steadfast appearance with stepped horizontal bars delivering a 3-D effect. Fog lamps on the ZR are packed in a more compact recess with a vertical line that follows the outer edge of the bumper and features a bright chrome trim detail.
New headlamps include a forked frame around the main lamp that flows seamlessly into a single line extending in a matching chrome trim element towards the central Toyota emblem.

The ZR rolls on 16-inch alloy wheels with silver finish, while the catamaran styling is repeated at the rear with a new bumper design that harmonises with the lines of the tailgate and extends to side reflectors separated by a lower bumper garnish. A rear spoiler and automatic levelling head lamps top and tail the Yaris upgrades.

The cabin has also been freshened with gloss black ornamentation replacing the silver highlights on the steering wheel, audio unit surround and around the gear-knob base.
Toyota Yaris SX variants, in addition to the bigger engine, are equipped with rear and rear side privacy glass, and a premium steering wheel and gear-lever, while premium features fitted to the ZR include automatic climate control air-conditioning, satellite navigation, plus Toyota Link internet connectivity.

ENGINES / TRANSMISSIONS
The 1.5-litre engine fitted to the SX and ZR delivers maximum power of 80 kW at 6000 rpm and top torque of 141 Nm at 4400 revs and is mated with a four-speed automatic transmission. It is now rated at Euro 5 for emissions.

SAFETY
Every model in the Australian Toyota Yaris range has seven airbags, a reversing camera, vehicle stability and traction control, anti-skid brakes with electronic brake-force distribution and brake assist, and an emergency brake signal that flashes the hazard lights.

The premium safety system, standard on ZR, consists of a pre-collision system, lane departure alert and auto beam headlights. The pre-collision system monitors the road ahead, warning the driver of an imminent collision risk and readies the brakes for maximum operation when the brake pedal is pressed.

If the driver fails to respond to the warning, the system will trigger autonomous emergency braking to slow the car to reduce the severity of any impact. Lane departure alert looks out for lane markings. If the Yaris begins to deviate from its lane without the turn indicators being used, the system alerts the driver with visual and audible warnings. Automatic high beam detects the headlights of oncoming traffic or tail lights of vehicles ahead, automatically switching between low and high beam to avoid dazzling other drivers. 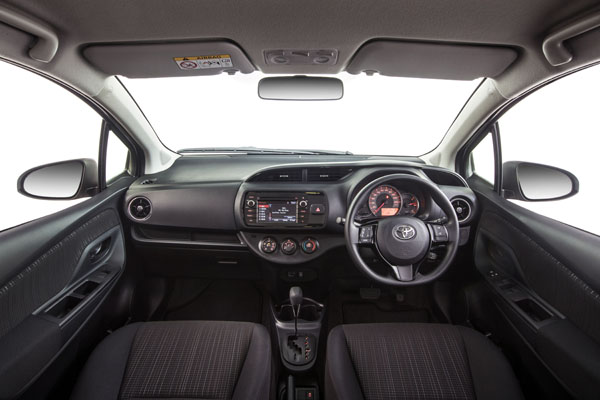 DRIVING
As far as driving’s concerned what’s new about the Yaris ZR? First up, it rained on test; so what’s new? What’s new is that the Yaris has only one windscreen wiper that quietly and efficiently swipes almost all the glass, leaving a wide and clear view ahead.

No surprise then, that in these days of efficiency with economy, other small-car manufacturers will follow suit.

The automatic high beam headlights left a little to be desired by operating in a random pattern not consistent with how I possibly would have worked them for clearest vision of the road ahead.

The four-speed automatic transmission of the Yaris is a tad behind the times but is in quite good harmony with the motor, the 141 Nm of torque pulling it through. Peak torque doesn’t arrive till 4400 revs, but it has a fair bit of grunt leading up to that engine speed.

The Yaris retains the quality of fit and finish associated with Toyota vehicles with space and comfort to match, the ZR variant is a worthy range topper.

SUMMING UP
Since taking over the small-car mantle from the Toyota Echo in 2005, the Yaris has led the light-car segment in four years and has been runner-up five times. The fresh face and added safety features should help maintain this outstanding record.