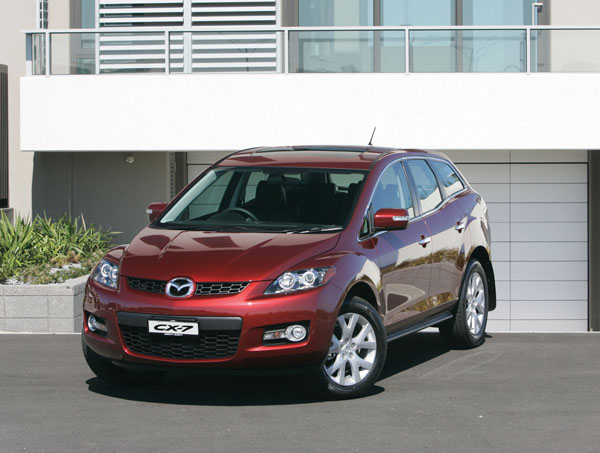 Mazda CX-7 entered new territory when it was launched downunder in November 2006. It was a cross between a hot-hatch and an SUV rather than a toned-down 4WD as was the norm back then. Powered by a turbocharged 2.3-litre four-cylinder engine with 175 kW and a hefty 350Nm it really gets up and boogies when you hit that pedal on the right. Not surprisingly it likes a drink.

Despite its sort-of SUV shape Mazda CX-7 in AWD format really isn’t intended to do any more than mild off-road running. You could conceivably take it onto a beach, but most owners are unlikely to go beyond dirt tracks. Don’t even think of going onto a beach in the FWD models.

Note that the ‘7’ in the model name stands for medium-sized vehicle in Mazda terminology, it doesn’t have seven seats, only five (Mazda CX-8 diesel and CX-9 petrol fill the seven-seat spot).

The CX-7 has good interior space for four adults and a child. There’s pretty good legroom in all seats, but the sunroof fitted in the upmarket versions steals a fair bit of headroom. The sporty slope of the roof limits what can be carried in the way of bulky items. The boot floor is relatively high but the width and length make it a good load carrier. 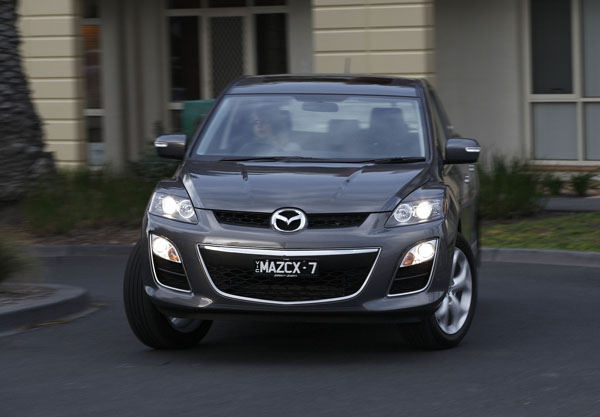 In October 2009, Mazda expanded the CX-7 range, offering a cheaper model with 2WD and a 2.5-litre naturally-aspirated petrol engine with 120 kW and 205 Nm. Like it turbo-petrol brother it’s not particularly economical. If you want reasonably low fuel consumption a 2.2-litre turbo-diesel engine was added at the has 129 kW of power and 420 Nm of torque.

Then again, if you’re looking for the semi-hot-hatch feel of the original Mazda CX-7 these lower powered engines take away the fun.

The great majority were sold with automatic transmissions, though there wasn’t an auto option on the diesel. Petrol manuals are likely to be hard to resell in years to come as Australia is rapidly moving to be an auto-only market.

Styling changes to the 2009 CX-7 saw a new radiator grille and head and foglights and a reshaping of the front bumper.

Inside there’s a revised dash with a 3D look, changes to the instrument lighting and a new design of steering wheel incorporates controls for various in-car systems. A larger in-dash screen is fitted to all models. 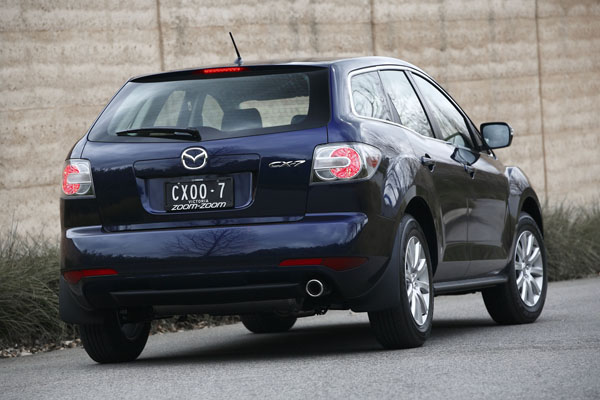 Added sound deadening and a slight improvement in rigidity of the body give the 2009 to 2012 CX-7 a more sophisticated feel.

Mazda has been selling cars for in Australia for almost 50 years and now has dealers around our continent. As is usual with most marques sold here, there’s a concentration in urban and country city areas. If you live in a relatively remote region it’s smart to check on availability of spares and repairs.

Insurance costs are generally moderate, with insurance companies apparently not having noticed Mazda sneaking semi hot-hatches onto the market.

Mazda CX-7 was taken from the import list in Australia late in 2012 and replaced by the slightly smaller CX-5 a model that has been a huge success since day one. Resale value of the CX-7 hasn’t really suffered by its withdrawal from the market.

WHAT TO LOOK FOR
Few are driven as serious hot-hatch SUVs, but look for signs of uneven tyre wear, especially at the front.

Similarly, heavy build up of brake dust also indicates harsh use of a CX-7.

Check the service books to make sure the work was done on time.

Turbocharged engines that are driven hard for sporting performance can suffer extra wear if not warmed up correctly after start. Look an feel for signs of oil leaks at the turbo.

Feel for serious lag from any turbo, particularly the petrol, that may indicate it has major problems. Similarly look for a sudden burst of smoke from the exhaust during your test drive. All the more reason to have a professional inspection of the CX-7.

Manual gearboxes that are stiff in their changes and/or crunch of fast downshifts may be due for an overhaul.

Automatics that are slow to change, overly slow when shifting, or change ratios when you reckon they shouldn’t should be regarded as suspicious.

Do the usual checks of the condition of the seats and carpet (don’t forget the boot for the latter) for signs of damage caused by cranky kids or lazy uploading of cargo.

CAR BUYING TIP
Young and/or inexperienced drivers may be slugged significantly more insurance for vehicles aimed at high-performance driving. Check on prices before falling in love with the car.