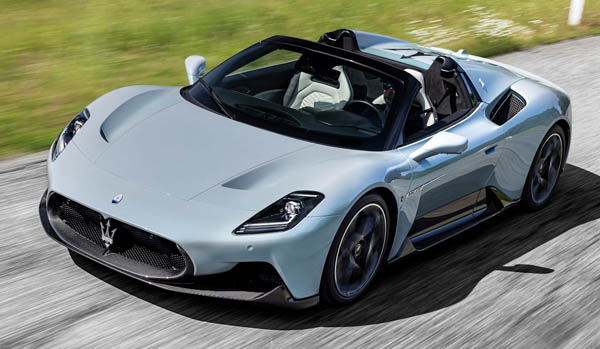 Performance and comfort are now taken to a new level in terms in the great outdoors:
Maserati presents the MC20 Cielo spyder.

It has an innovative retractable glass roof that opens and closes speed in just 12 seconds.

The new model is equipped with a state-of-the-art electrochromic (smart glass) window
that can instantly be transformed from clear to opaque at the touch of a button on the
central screen, courtesy of Polymer-Dispersed Liquid Crystal technology.

Maserati MC20 Cielo weighs just 65 kg more than the coupé, By limiting the increase in
weight to around 60 kg, Maserati says it maintains the dynamic performance and driving
pleasure of the coupé version in the MC20 Cielo. Sounds great. When the MC20 Cielo
reaches us Downunder we will hopefully be able to borrow one and give you our thoughts
on this.

The carbon fibre chassis provides uncompromising torsional rigidity, offering a
combination of extraordinary handling on the road and on the track.

The new model also adds a wide range of Active Safety Systems, unlike any other model
ever has in this segment. As well as the parking sensors, rear-view camera and blind spot
monitoring included in the MC20 since the MY22, the new spyder introduces autonomous
emergency brake, traffic sign information and the Surround View 360° system, to help with
parking manoeuvres using four extra cameras.

The new spyder will broaden the MC20 range and will bring Maserati into the segment of
convertible sports cars. The brand intends to expand its offering to cover the convertible
segment, which represents 35 per cent of the global super sports car market.