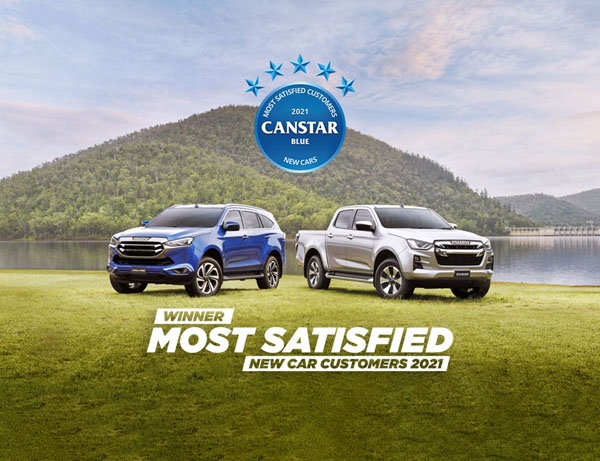 The Isuzu D-MAX Ute and MU-X SUV continue to impress, with one of Australia’s most-
respected and recognised comparison websites. UTE given the 2021 Canstar Blue
Customer Satisfaction Award for New Cars.

Isuzu UTE was the only Automotive brand in Australia to be awarded perfect scores
across all seven Canstar Blue categories; Overall Customer Satisfaction, Reliability, Value
for Money, Driving Experience, After Sales Service, Point of Sale Service, and Car
Servicing.

Leading the 2021 Canstar Blue automotive accolades was Canstar Journalist, Dean
Heckscher, who objectively reported on each of the automotive brand entries, and
remarked that, “Isuzu was the one to beat in Canstar Blue’s latest overall new car ratings,
scoring five stars in all categories, giving it the inside lane on competitors in a crowded
Australian market.”

“Isuzu evidently ticks the boxes for those who are after a new car,” commented Mr
Heckscher.

Not only did IUA score the full five stars across all categories, it was the first time in
Canstar Blue’s 11-years of surveying that an Automotive brand has received a perfect
score in the customer survey.

Tasked with maintaining the award-winning level of customer service throughout each of
the 155 Dealership sites across Australia is IUA Deputy Managing Director of Service,
Parts, and Aftersales, Mr. Takeshi (Ted) Yasui, who reflected on the accolade saying, “We
have always put our customers first, and to be the first brand to receive a perfect survey
score is proof of that.”

“Over the last decade, IUA has built a reputation for customer satisfaction, reliability, and
value for money, which is evident with the response from customers surveyed, and the fact
that Isuzu UTE Australia has won the 2021 Canstar Blue Customer Satisfaction Award for
New Cars.”

“Being singled out as the only automotive brand to score five stars for Reliability is a real
testament to our designers and engineers who have invested over four million kilometres
of durability testing in the development of the new-generation Isuzu D-MAX and MU-X.”

As part of the 2021 Canstar Blue research, the survey concluded that over a quarter (26%)
of all survey respondents said that they had modified or accessorised their new car.

“Amongst the lifestyle, towing, and touring customers, both the D-MAX and MU-X have
proven to be the ideal blank canvas for accessory fitment and customisation, with
customers able to customise their Isuzu to their specific tastes and requirements from a
catalogue of 213 Genuine Accessories available for fitment,” said Mr Yasui.

Canstar Blue’s five-star rating for the D-MAX and MU-X isn’t the only five-star rating to be
awarded to the new-generation Isuzu nameplates, with both vehicles revered as two of the
safest vehicles on Australian roads; with their maximum five-star safety ratings as awarded
by ANCAP. Standardised across the entire range of D-MAX and MU-X, is Isuzu’s
Intelligent Driver Assistance System (IDAS), which encapsulates the latest in advanced
safety and driver assistance systems.