LATEST TOYOTA KLUGER IS THE SAFEST YET 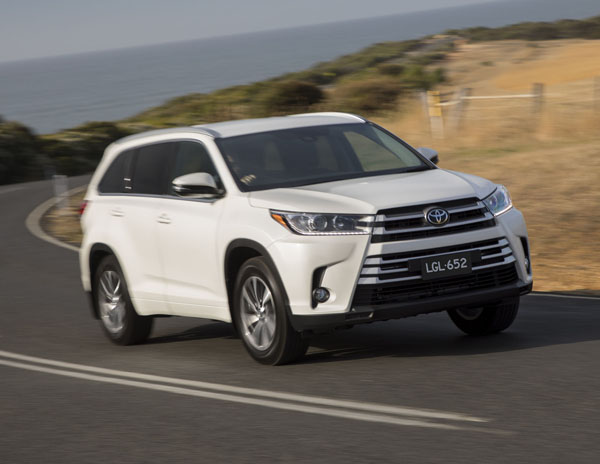 Toyota has established itself a one-stop shop for 4WDs and SUVs, with seven models ranging from the urban C-HR through to the go-anywhere / do-anything LandCruiser 70 and 200 series. In between there’s the RAV4, Fortuner, Prado and this week’s review vehicle the semi-luxury Kluger.

Kluger is aimed at the SUV buyer who wants to transport the family in comfort rather than tackling any serious off-road terrain. Having said that it does come with the option of all-wheel drive although that’s more likely to be used for recreational towing than bush bashing.

Kluger comes in three equipment levels GX, GXL and Grande each with the choice of front-or all-wheel drive but with a single drivetrain, 3.5-litre petrol and eight-speed automatic transmission. All are seven-seaters.

DRIVETRAIN
Power comes from Toyota’s long-established 3.5-litre V6 which was upgraded in 2017 with the added efficiency of direct-injection. This saw an increase in power of almost 8.5 per cent, to 218 kW, while torque rose to 350 Nm.

At the same time the automatic transmission was improved from six to eight ratios. The combination of the revised engine and new transmission led to a reduction in both fuel consumption and CO2 emissions by at least 10 per cent when measured on the official cycle. 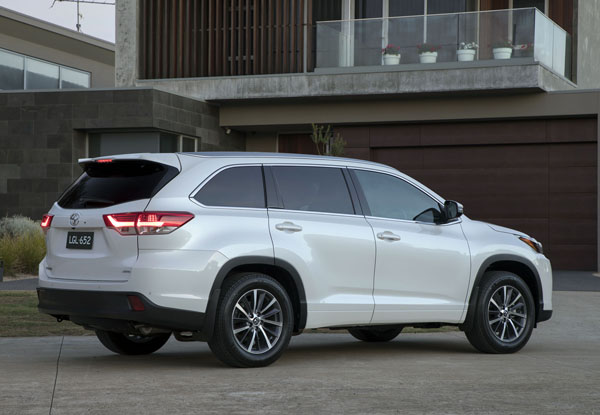 INFOTAINMENT
Kluger GX has a 6.1-inch colour touchscreen with the Toyota Link multimedia system. GLX and Grande get a larger (8.0-inch) screen and advanced Toyota Link as well as satellite navigation and digital radio. Bluetooth pairing is intuitive and there is a sensibly located long narrow slot on the front console ideal for storing smartphones immediately above the USB port.

SAFETY
The most recent Kluger update, in January 2018, saw no external or mechanical changes but with a number of advanced safety features previously only available in the Grande added to the GX and / or GXL models.

Now standard across the range are crash prevention or mitigation features including the Toyota pre-collision safety system that uses the combination of camera and radar to monitor the road ahead not only for other vehicles but also for pedestrians.

Also new to GX and GXL are autonomous emergency braking, lane-departure alert, active cruise control and automatic high beam. These add $950 to the price of the GX taking it to $44,500 with front-wheel and $48,500 with all-wheel-drive. 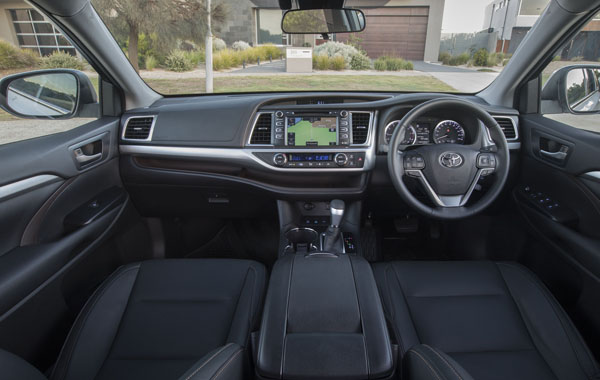 DRIVING
As is invariably the case Toyota Kluger has grown over the years and at just under five metres long and two metres wide isn’t that far behind LandCruiser 200. There’s a decent climb up to get in which can be a problem for older occupants although there is a running board to lend a hand, or should that be foot?

The front seats are large and comfortable, there is excellent legroom and headroom in the three second row seats. These slide forward to help access to the third row seats although it will never be too easy for adult passengers – two children in these rearmost seats makes most sense.

Boot space is very good for a seven-seater. All rear seats can be folded flat with 60/40 splits in both the second and third rows.

Kluger’s bulk can cause problems in tight car parks where the Grande’s range of four cameras, including top-down panoramic view, as well as rear cross traffic alert really come into their own. Excellent not only for on road use and parking, but also useful should Kluger be taken off-road.

Although the engine’s torque peak of 350 Nm comes in at an extremely high 4700 rpm there’s more than enough grunt from much lower revs.

Once out on the motorway it’s easy to forget Kluger’s size and imagine yourself cruising in a luxury saloon but with the added benefit of a high driving position and plenty of interior space. It’s very quiet with minimal intrusion even on coarse road surfaces.

Ride comfort in the Kluger is good with safe and predictable handling partly through a considerable level of Australian testing from the early design stages. You certainly wouldn’t describe it as sporting but nor do we expect it to be.

The all-wheel drive Kluger variants have Dynamic Torque Control (DTC) which helps the driver to get maximum traction and cornering stability. The system uses information on vehicle speed, yaw rate and steering and throttle angles to control torque distribution automatically between the front and rear axles. It drives only the front wheels when the vehicle is cruising and switches to AWD only when required.

Fuel consumption from the Grande AWD that we tested is listed at 9.5 litres per 100 kilometres. We averaged just under 11.6 L/100 km over our normal blend of urban, motorway and rural driving.

SUMMING UP
Toyota Kluger is a large comfortable SUV that will generally be used predominantly as an urban people carrier. Having the option to take the all-wheel-drive versions into mild off-road conditions will attract adventurous family buyers as will its 2000 kg towing capacity.

Toyota shows no sign of deviating from its three years / 100,000 kilometre standard warranty and given its market domination probably doesn’t need to. Every new Kluger is covered by Toyota Service Advantage capped-price servicing at a maximum of $180 per service.