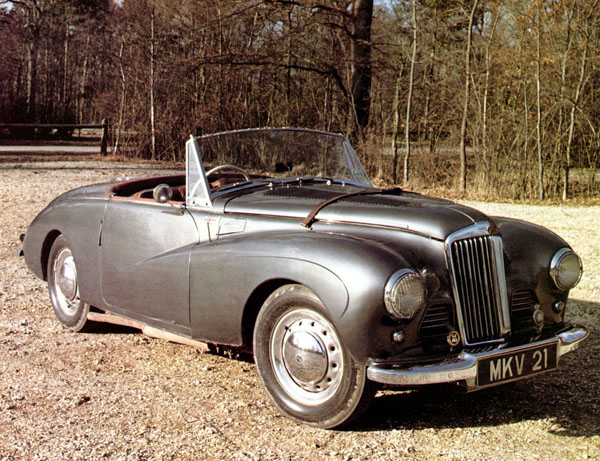 Sunbeam was one of the very few British companies to seriously build, develop and race a team of Grand Prix cars. When it won the French Grand Prix in 1923 Sir Henry Seagrave became the first driver to win a Grand Prix in a British car. This feat was not repeated again until the 1950s. The company went into liquidation in 1935 and was eventually taken over by the Rootes Group, along with its sister company Talbot, to join the Hillman and Humber marques.

The first two-seater Alpine came into being in 1953 being based on the Sunbeam-Talbot 90 saloon but whilst the car was quite successful in competition it was discontinued in 1955. In mid-1959 a sportscar derivative of the Sunbeam Rapier was marketed and this was once again called the Alpine. The design had good appeal as the car was fitted with a smart two-seater body shell with prominent tail fins and wind-up windows.

Initially the engine fitted to the Alpine had a capacity of 1494 cc which allowed the car to reach 160 km/h but acceleration was slow taking 14 seconds to go from rest to 97 km/h. The use of a smaller engine size than its main competitors, the MGA/B and Triumph TR series hampered sales but the competitive price and good equipment levels enabled it to stay in the market.

Rootes produced Alpine cars from 1959 to 1968, growing up to Series V, and to a 1725cc engine. Overdrive was available as an option for all models and even automatic transmissions were on the options list for a short time. Both open cars and closed hardtop models were offered and a few fastback conversions were produced by an outside company with Rootes approval.

The basic lack of performance was rectified in 1964 in an unusual way. Following the success of the AC Ace into the Cobra with a Ford V8 engine transplant Rootes decided to fit a 4.2-litre 122 kW Ford V8 engine to the Alpine which could be done and the present styling maintained as the engine slipped under the bonnet without the need to alter any skin panels. Also the body structure of the original car was very strong so the additional torque could easily be accommodated without the need to strengthen any sections. Released as the Tiger, assembly was carried out by Jensen.

The transformation in performance was remarkable. Whereas the four-cylinder Alpine needed 14 seconds to reach 97 km/h the Tiger took only 9.6 seconds and the maximum speed rose from 160 to 190 km/h. The production of Alpines was discontinued in 1967 after the Series 2, 4.7 litre went on sale as Rootes had been acquired by Chrysler who could not stand to see a sportscar in their range using a rival manufacturer’s engine.