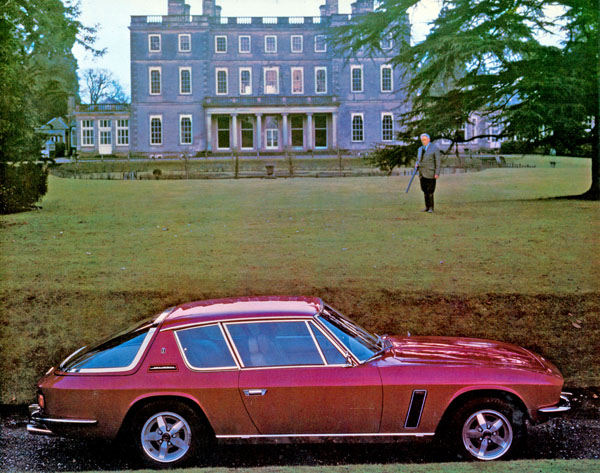 After joining the West Bromwich coachbuilding firm of W J Smith & Co in 1930, brothers Allan and Richard Jensen designed sports bodies for modified Standard, Wolseley and Ford chassis. Soon the brothers took charge of the firm, which in 1934 became Jensen Motors, a producer of sports cars based on Ford components. Several Jensen 3.0-litre cars we exported to the USA and one of these was ordered by Clark Gable in 1936. Their S series of 1937, powered by a 3.6-litre Ford V8, incorporated the American-built Columbia dual ratio rear axle as used on Auburn eights and V12s, giving six forward speeds.

The Jensen brothers modified the Ford engines by fitting English SU carburettors and magneto ignition, claiming a power output of 90kW, which was good enough for a top speed of 136km/h and fuel consumption of over 14.1-litres per 100km. A cheaper version powered by the 16kW Ford V8s was not very popular. In 1939 Jensen came up with a very fine car, the H series, which was powered by the straight-eight American Nash 4.3-litre overhead valve engine. With twin ignition and nine main bearings, this was a smooth and powerful engine which could propel the saloon version at a comfortable 144km/h.

In the post-World War II period they concentrated on using Austin engines in their sports models. They also built the body of the Austin A40 Sports convertible for the USA market. Hardly common, but more familiar, were the Interceptor four-seater cabriolets of 1949-58 and the companion sports saloons of I953-58, powered by a modified A135 Austin 4.0-litre six and capable of 152km/h. In 1953 the Interceptor was joined by the lighter and even faster fibreglass bodied 541 saloon. Like the Interceptor, it was powered by the 4.0-litre Austin engine. The somewhat costlier 541R series of 1957-60 had four-wheel disc brakes. The last 541S, the S series of 1961-63, was equipped with Rolls-Royce Hydramatic transmissions, but the Austin 4.0-litre engine was seen as lacking in power for a luxury coup‚.

Jensen looked to America for a new engine and chose the 5.9-litre V8 Chrysler engine and coupled this to the four-wheel drive system developed by the tractor millionaire Harry Ferguson. For braking they adopted the Dunlop anti-lock system. This was known as the Ferguson Formula and so the car was named the Jensen FF. Originally the FF had a fibreglass body but when this was changed to steel the marque was more comparable to some of the other cars in this market segment.

The engineering was right for a luxury sports car but the old 541 body style was somewhat dated. A new Jensen with an Italian body styled by Vignale with its four-wheel drive and anti-lock braking and sold as the FF became the first production car in the world so equipped.