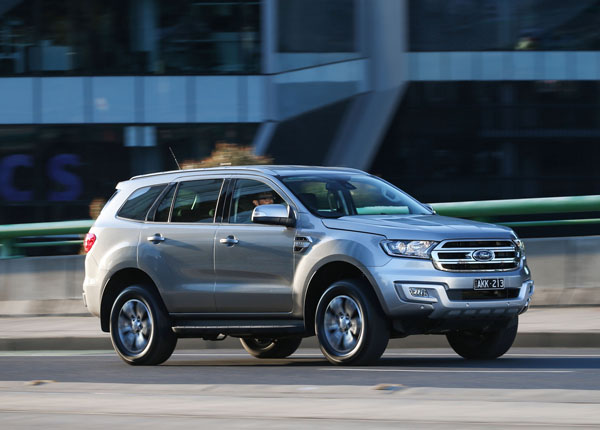 Since the Ford Everest was introduced in 2015, the large SUV has held a steady, if unspectacular, course picking up several 4×4 awards on the way and gaining seven seats as well as five. Also introduced was a rear wheel-drive models for the High Street adventurer.

Now the Everest is about to hit the big time with the MY19 version taking on a new-generation powertrain which includes a bi-turbo, four-cylinder diesel engine mated with a 10-speed automatic transmission; a raft of the latest safety systems and convenience features, as well as a five-year unlimited kilometre warranty and further service benefits.

Maintaining its three-model line-up of Ambient, Trend and Titanium, pricing ducks below $50,000, with the Ambient rear-wheel drive, and tops out at $73,990, plus on road costs, for the flagship Titanium 4WD seven-seater.

Everest Trend Bi-Turbo, with only a small rise in pricing over the preceding single-turbo model, was on test.

STYLING
Ford Everest’s rugged appearance have all three variants standing their ground with any rival, with the Trend taking on such features as 18-inch alloy wheels and running boards, while the square shaped rear of many traditional SUVs is left behind by Everest’s sculpted tail lamps, with integrated LED lighting.

INTERIOR
The cabin is a genuine seven-seater. Flexible second-row seats have 60 / 40 split, and power-fold third-row seats with 50 / 50 split, can be folded flat, providing 2010 litres of cargo space with a class-leading payload of up to 750 kg. 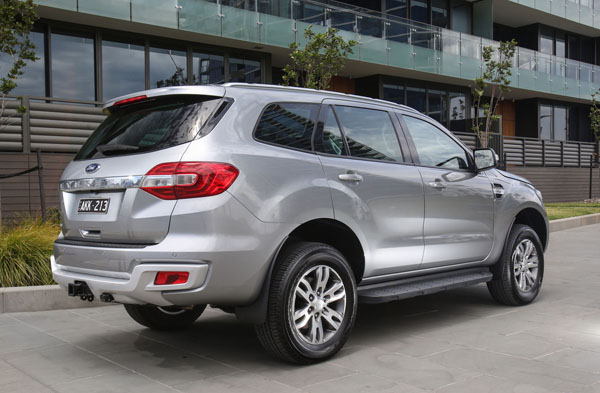 INFOTAINMENT
Brightest feature of the system is the high resolution 8-inch colour touchscreen in the Interior Command Centre, one of the easiest on the market to view and operate. The up-to-date design of the instrumentation cluster, which incorporates dual 4-inch colour screens, is not too shabby also.

Unchanged is an AM/FM/CD audio system with DAB+ digital and 10 speakers, augmented by AUX/iPod/ USB/SD card input ports. SYNC 2 brings voice control with simple commands for many vehicle and convenience systems and emergency assistance connects drivers with emergency responders in a serious collision.

ENGINES / TRANSMISSIONS
The new bi-turbo diesel engine in the Everest Trend and Titanium really is the bees’ knees, pumping out maximum power of 157 kW at 3750 rpm and top torque of 500 Nm between 1750 and 2500 revolutions. 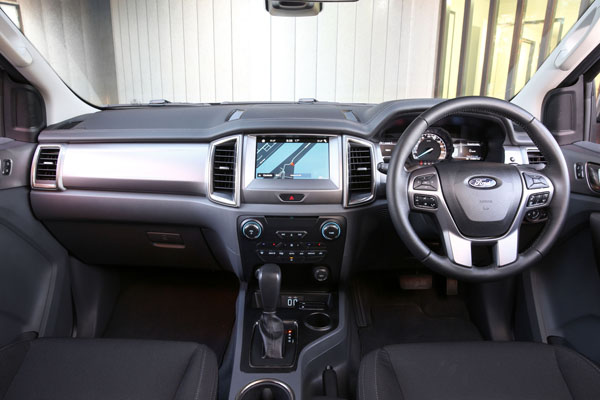 SAFETY
Also debuting on the Everest Trend are pre-collision assist and pedestrian detection with the autonomous emergency braking system and traffic sign recognition.

Parking is made easy with the use of a rear-view camera, plus audible sensors front and rear.

DRIVING
The bi-turbo motor is a delight. Overtaking on the highway is only a matter of easing the accelerator pedal forward and the power needed is presented smoothly and instantaneously, making the sometimes ticklish manoeuvre a breeze.

Generous ground clearance (225 mm) and 800 mm wading depth get the Everest ready for anything that might stand in its way off the bitumen.

Shortcomings – short being the operative word – rest with the rear seats, the third row, when in use, offers little head room for an adult and limited legroom even for children, making more than short journeys a chore.

Getting in and out is quite a step up too.

However, occupants have the advantage of dual zone climate control and more than 30 stowage spots totalling 48 litres (the glovebox can take a 16-inch laptop), while sound insulating materials and active noise cancellation technology make for a quiet cabin.

Note: These prices do not include government or dealer delivery charges. Contact your local Ford dealer for drive-away prices.