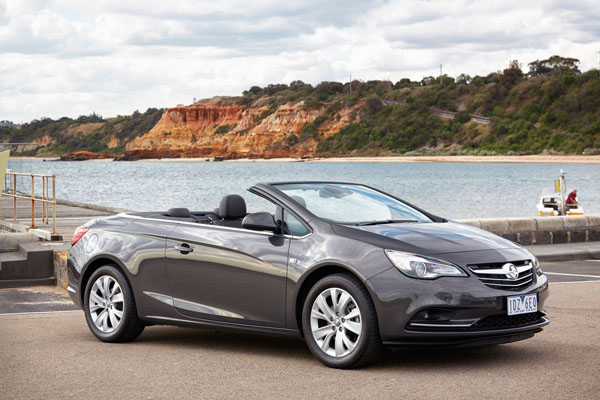 Holden Cascada is the convertible version of the Holden Astra. It’s sold in most other
markets with Opel badges but carried the Holden tag here.

Cascada was introduced to Australia in April 2015, but didn’t prove to be a big seller and
was quietly slipped off the new-car price list midway through 2017.

At almost 4.7 metres long the Cascada is significantly bigger than its European convertible
competitors so can provide reasonable comfort for four full-sized travellers. Note the word
‘reasonable’ because taller occupants in the back may have to do a deal with those in front
in front of them.

The roof is powered and opens in just 17 seconds at speeds up to 50 km/h. Perfect if
you’re stopped at a red light want to let the sunshine in. Or to close it because rain clouds
are threatening…

Heated front seats and steering wheel provide are a big plus when the roof is down during
the cooler months, which are often the best time for open-top driving. 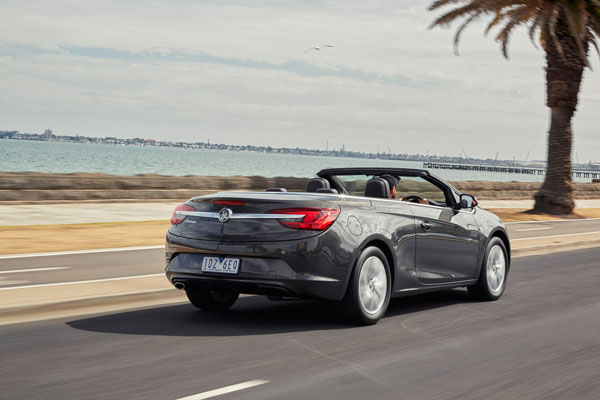 Boot space in convertibles is compromised by the need to store the roof within it but
Cascada’s 360 litres with the roof in place and 280 litres with it stowed is pretty good.

Holden Cascada has a 1.6-litre four-cylinder turbo-petrol with a reasonable 125 kW of
power and 260 Nm of torque. All Australian imports had a six-speed automatic. Which is a
shame because a manual may have given Cascada a sportier feel and helped sales.
Anyhow, I’ve never been particularly good at hindsight…

Cars without a roof have to be significantly beefed up in the lower areas which adds a lot
of mass. A kerb weight of 1710 kg means Cascada doesn’t have a lot of get up and go.
Cool cruiser? Yes. Hot sports machine? No.

Fuel consumption can be high if you try to push it hard, and in typical European fashion it
needs expensive 98RON petrol. Though owners tell us it will run on 95RON if they don’t
work the engine hard. Personally, we feel it’s not worth trying to save a few dollars a week
by going for the cheaper fuel.

The big open-top Holden cruises comfortably on the motorway although rough rural roads
can generate some scuttle shake, which hardly comes as a surprise considering the large
cabin opening. Otherwise ride quality is firm but not excessively so. 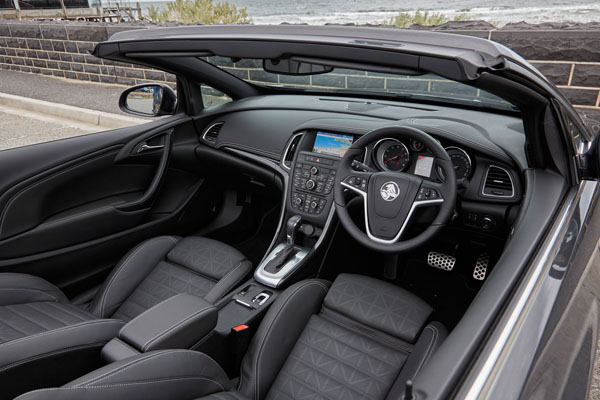 Spare parts are reasonably priced for an imported German car and we have heard of no
real delays in getting bits. Obviously if you’re in a remote area it’s not likely the Holden
dealer will have parts. Some components are shared with the Astra and may well be on
the shelves, others will have to go on back order.

Insurance costs for the Cascada may vary more than is usual, possibly because it didn’t
sell in large numbers so different companies have had varied history on the car. As always
shop around, but make sure you’re doing accurate comparisons.

WHAT TO LOOK FOR
Make sure you do your pre-purchase road testing on some roughish roads to feel for
excessive body flex, squeaks and rattles. They don’t need to be dirt roads – though these
would be preferable to give it a workout.

Check the condition of the seats and carpets, indeed all areas of the cabin for signs of the
Cascada having been caught out on the rain with its top down.

Ideally take it for a test drive when it’s raining you may have to call Huey to send it down.

If a Cascada has been run on lower octane fuel and driven hard there could be engine
troubles. Have it fully checked out by a professional, ideally one with a Holden
background..

Run your hand back and forward over the front tyres. Unevenness may have been caused
by hard cornering, or bumping a kerb that has upset the wheel alignment.

Make sure the engine starts easily and warms up quickly.

Turbo lag will be there but if it seems too bad that’s grounds for suspicion.

Make sure all changes on the automatic transmission are smooth, they should be all but
imperceptive under light to moderate acceleration. Hard driving may result is harder ratio
changes. If they seem too bad have a transmission specialist check it out.

CAR BUYING TIP
It’s wise to start looking for relatively rare cars months before you plan to buy. Otherwise,
you may not be able to find one…